I decided to reflect on an old idea I had for Super Smash Bros. Brawl mods, especially since the news that hit us like a freight train Tuesday at 9 in the morning. I’m still kind of suffering from the aftershocks of a crossover action RPG joining a celebration of gaming, but nonetheless, I thought I’d revisit this topic. Ever since I came across a website called KC-MM, I remembered seeing a mod that plumped up Peach a little bit and removed the bottom half of her dress to reveal her legs, which has since been long gone. Anyway, on to the idea. This is a sort of size/weight mod for Peach, Zelda/Sheik, and Samus/Zero Suit Samus in Brawl complete with vertex edits where all five models are fat. There would also be new movesets for them compared to their normal movesets like Peach’s Parasol, Samus’s Bomb, and Sheik’s Chain, though the Transform move for Zelda/Sheik and the Zero Laser/Power Suit Samus Final Smashes would still be the same to keep consistency, along with the secret inputs to play as Zero Suit Samus. The body shapes for all five, I think, would be inspired by the works of the DeviantArt user TheStarTraveler, who is known for his human Quarian OCs and his Blooming Daisy and Plumptacular Multiverse series. Some of the new moves would include a variant of Peach’s Vegetable where she recovers health with it (though it can’t be used in the All-Star Mode/Boss Battles rest area) and a wider-ranged version of Nayru’s Love to accomodate Zelda’s size. Oh, and since the mod will give her a bigger bubble butt along with the rest of her fat body, Peach’s Peach Bomber becomes just as strong, if not stronger than, a reverse Warlock Punch (which involves pressing the opposite direction that Ganondorf is facing when starting up his attack). Her back and down throws also hit harder than before. Also, all five characters’ have different victory poses compared to the ones that show their agility. And due to their weight, they’re slower, but not nearly as slow as Ganondorf. They also can’t jump as high due to their weight (especially if they’re under the effects of the Metal Box). Lastly, an alternate version of the mod removes everyone except these five in a separate mod known as SSB Sumo Brawl, which can be updated with BrawlEx to add more fat female characters like Daisy and Lucina.

it’s relevant enough for me to post again, i suppose (again? i think??)

once upon a time, i made an incredibly ancient fat zss vertex mod for brawl, 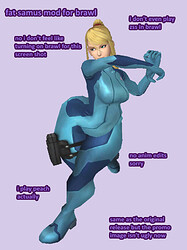 (also note: vertex edits literally any bigger than this are incredibly impractical, it’s better to make a new model really)

im makign fat mods for brawl, i made god fox, now its time to go beyond mere power