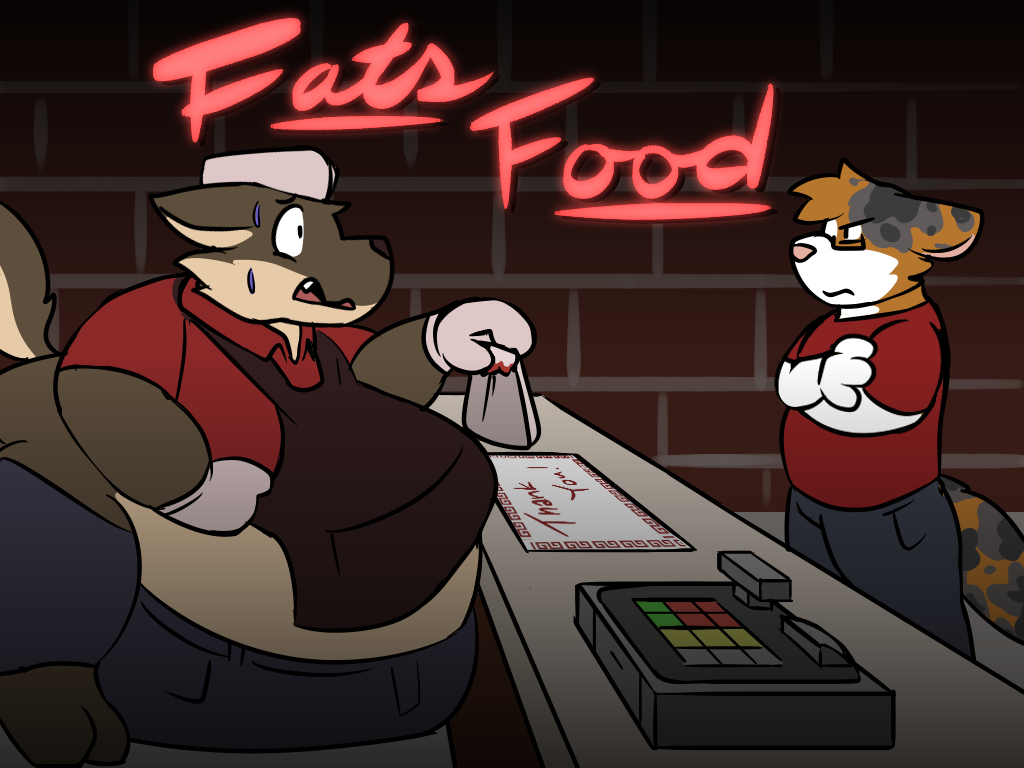 Fast Food this is not!

A team of one, you must handle the customers, as well as your appetite! Grow bigger as you eat, and make sure the orders are right, the owner likes them big!

Made for the Weight Gaming Fat Fortnight

Learned about this Game Jam on Wednesday, so I was clipped for time, but nevertheless I’m happy with it! Still adding finishing touches before the deadline!

couldn’t figure out how to make a burger, accidentally shoved a dozen burger patties in my mouth and got too fat to reach anything, lol

I can’t seem to grab any of the burgers from the freezer. threw the door open, and he just won’t pick any patties up :I

I can grab the condiments though, and proceeded to make a sushi cat out of the poor fast food worker.

This was a great game to play and I’m glad I could help with testing! I enjoyed playing a lot

I was having trouble getting patties as well., but I found that if you take the left side door and slide it right, you can grab them

Game has been updated to its final version!

I like this game, but the ingredients don’t keep alternating for the customer once you go to the freezer, grill, or condiments station. So unless you use pen and paper (which yeah, restaurants, but not the game) you fail to satisfy at least 2 of 3 customers at any 1 time.

But making him super fat is always fun

Enjoyed this game. Thanks so much for making it. I hope there’s more like this coming from you!

Just a few things to note about the game
- The customer’s timer starts once the game is launched rather than when a mode is selected
- As noted above, customer’s orders don’t cycle after interacting with any station, including other cash registers. Maybe it’d be simpler to show their orders as one bubble rather than cycling, or show up on the side of the screen instead.
- Using the escape key to immediately close the game isn’t such a good idea. It should bring up a pause menu instead
- Eating ingredients rather than putting them together can be tricky, but it could just be me.

Other than that, this is a pretty decent game! It still needs some polishing, but if you have time you should definitely tweak it or revisit it, it’s got a lot of potential.

I don’t even know how to give them food. Can’t play at all :B

Make sure the burgers go the full cycle on the grill, and they’re cooked.

Some very nice stuff on display! Unfortunately you probably should’ve done a bit more playtesting. It’s very difficult to actually get an order done, though it is also fun to just bloat up like a food balloon

control of the character is a bit too slidey, is the floor like ice or something?

I’d love if I could make him so big he can’t actually move around the kitchen, so big the belly just curves around that counter in the middle and gets him completely stuck

that would be instant game over then

yeah, but you do it after you server the 3 burgers
win win

The game is pretty fun! But I have noticed whenever you go to any of the stations, there seems to be a glitch with the customers where their orders stop cycling, and if they’re leaving while you’re using one of the stations, they just walk in place. Other than that, it’s really fun eating the patties and the ingredients, making the character balloon up.

I have to say a fun little fast food sim. The concept is interesting with the player having to mix keeping their energy up with controlling their expanding waist line very interesting. The addition of some soft body physics is also a nice touch. Unfortunately, the game is bogged down mainly by some bad UX and controls. The way meals are ordered is clunky and waste quite a bit of time having to wait for the ingredients to scroll by in the speech bubbles. The way you move items is cool, but I found the IK messing up on more then one occasion and messing up an order because I mixed it with another order on accident. Also, at some point the game will become just unplayable since you can barely reach anything. In the end I would love to see this game improved further and the UX issues fixed as it has some real promise to be a fun little game.

I particularly liked this one for a few reasons, but I will say the actual game is nearly impossible to play due to the awkwardness of the controls and what seems to be good ole fashioned bugs. It took me several playthroughs to even realize how to actually make a burger that I could sell, and even when I was absolutely sure I had put the right ingredients on the burger, they still refused it. Its probably my fault, but several elements felt unintuitive. That all being said, if I just ignored the main game loop and just ate all of the ingredients, I found myself enjoying the game a lot more. The physics enabled belly was a great touch, having to reach over your stomach as you got too big was really what got me. Overall, didn’t actually find playing the actual game that entertaining but just eating the ingredients more than made up for it. With some polish and streamlining, I think this would be an extremely entertaining game. But please, for the love of god, unbind ESC from closing the game.

This project has a ton of potential. I love the ideas that it throws down. I really like the idea as you get bigger the gameplay gets harder too. I think the main feedback I’d offer is in the realm of usability. A lot of the game feels cumbersome and unclear. In some places I’m not exactly sure what i have to do to advance the game. I figured it all out, but only through a confusing trial and error. Also, don’t make the esc key close the game. My muscle memory presses esc to close the current menu in a game, so I exited the whole game a good 20 times while trying to play. But like I said I really like what the game is and does. I think it just needs polish.

Is there gonna be any more work on this? I know it was just for the gamejam but I’d love to see more of this!

Will there be an Mac version?