@PrinceMatchaCakes was wanting to do a simple little collab “game” with a few artists they knew and asked if I would be willing to program it for them. Its rough since I did not have I really only worked on it in my spare time on and off but this is what came out of it.

Awesome! A nice little interactive gallery with a Danganronpa feel to it. It’d be nice if there was a feature where you could highlight and select characters to see who their artist was, but it’s fine as is.

Thats a very interesting idea. May be fun to add that at some point if I get time. I know I may have some plans with expanding this concept out a bit further in the future.

A nifty way to have an art gallery! I agree that some way to see which artist did what would be a nice addition.

Only issues I have are nitpicks.
On the girl laying on her belly, there is a small extra line above her you can see when she jumps (see picture).
The enormous character in the middle of the map can behave strangely due to her size, it might be worth putting her closer to the edge of the beach so she doesn’t clip into view when you turn as much.

Cool idea and I hope to see it expanded further. 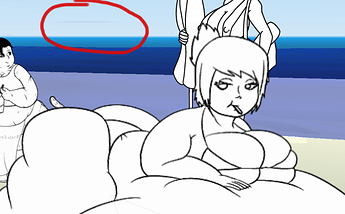 Ya the main reason is these where all drawn before I was contacted and was originally in a massive sheet that was not laid out in manner that made it easy to separate out the images. Due to this the images where manually separated and a few things like that got through.

As for the shading issues that was due to having to downgrade the openGL version being used to ensure we could support more devices on the web. This broke some of the shaders I made and I was a bit to lazy to want to go back to fix them

A quick side note the shaders on the downloaded versions look a bit better just due to the fact they run on a newer OpenGL version then the supported WebGL version in Godot but still broke them so some problems still persist.

SO MANY CUTIES! And quite a few art-styles I recognize! But many I don’t(but would like to)!

Links to most if not all the participating artists are in the description on the itch.io page if you want to check them out.

Good to know! Will check em out if I find the time.

here’s a let’s play i did of the game