(delete this if those against any of the rules)

Have any of you ever wondered where our fetish originated from? I personally thought about this a few times but could not come up with any conclusions, what say the rest of you?

Science says evolution and mutations change and adapt just about anything to suit the relative environment, even alter sensual preference, so if you’re looking for an origin point, Don’t think it’s going to be that easy. Although… I assume the origin is pre sailor moon.

I think he meant individualy how did it start with each one of us.

I initially found about all this because of “breast expansion” which is what I first got into, then I discovered this whole thing of WG and well here I am, but first I do remember being somewhat attracted to big waman lol, but I don’t remember exactly it all started, I just know that before I realized I was already into all this.

Well the idea of having someone fat in the family is at least before the discovery of America at least as some homes would feed their wives to the point they were obese. Back then it was thought that having a fat wife meant you did very well for yourself, if my memory serves me correctly.
Even though there are those fat female dolls were found feature a very obese female, that is more for pregnancy than for them being fat (more like a good luck charm).
For science purposes females are more likely to gain weight as they need nutrition for the baby, though remember that this was before any written word was created so that was the function for a long time.
In terms of it being a fetish… I can’t really pinpoint the actual start of it, probably the earliest is either a Carnie show or if you watched that one Betty Boop where she did expand for one skit at least.

Adoring fat women is at least as old as the story of the “Queen of Sheba” - pretty much the same time the great pyramid was build or even earlier.

I’m pretty sure there is a topic like this elsewhere, but if you mean the origin of the actual fetish, I might have some answers/theories.

Throughout most of history being big was considered a sign of prosperity. If you were that big, that meant you could afford to be that big i.e. had the wealth to spend on luxury and abundance. The ancient Chinese culture believed this.

Outside of status, a woman having meat on her bones was/is a sign of maturity and fertility (if I recall correctly).

Another interesting article I read was about the nowaday-fetish. The article observed a few men who said that they preferred bigger girls, and when looking at their traits and answers of a questionnaire it was noticed that most of them claimed to be highly stressed. In times of stress the human body puts on weight as to preserve itself in the event of lack of food and energy, and seeing bigger women might be a side-effect of being stressed: the mind sees her as “I can be with her because we would both be okay if a lack of food event happened”. I’m guessing on that last part.

If I were to guess, men nowadays see overweight women as a means of being well taken care of/well-off. Of course, to a limit as being severely overweight does cause adverse health issues, but a plump woman could be seen as “healthy” in status, wealth, and fertility.

With the changes in human history, culture, status, and science, being a bigger person isn’t really seen as anything more than negative in most cases. But, the reason(s) we have a thing for fat accumulation on the body might just be a primal thing afterall, one that we can’t tell its origin. Or it could simply be just because we were “wired” that way, and there isn’t anything wrong with that because it isn’t bad to have love for a bigger person.

I used to think that I was “messed up” because I found big girls attractive. Social norms told me “Fat = bad”, but my mind and heart yearned to be with a bigger girl. I can’t tell you why I do, I can’t explain why I am like this, but I do know what I like and that is enough for me and my wife.

So having studied history in college for quite awhile, I do know that there’s always been points in history where various degrees of plumpness was seen as attractive across many different cultures, from the Tang Dynasty of China to Renaissance Europe. There has even been times in the United States where it was seen as attractive, such as during the era of Western Expansion and the Victorian Era.

As for biologically why, I’ve got my own theory, although I do still subscribe to the idea that it had something to do with fertility and what-not. What I think, at least for males attracted to large women, is that it could be an extension of the male desire for female curves. Wide hips, large butts, and weighty breasts tend to be desired by a large portion of men and since these parts are seen as attractive areas of fat collection, perhaps in the mind of an FA this attraction to fat is extended to the rest of the body.

And for my personal discovery of being an FA, I remember seeing those before-and-after weight loss commercials and seeing a couple of weight gain scenes in cartoons growing up and finding myself being confusingly enamoured by the overweight girls on display

Blockquote I used to think that I was “messed up” because I found big girls attractive. Social norms told me “Fat = bad”, but my mind and heart yearned to be with a bigger girl. I can’t tell you why I do, I can’t explain why I am like this, but I do know what I like and that is enough for me and my wife.

I give a damn shit on current social norms - a hundred years ago pink was deemed a noble color, only worthy to be worn by men - girls had to wear blue.
And today? Nobody even belief that pink could be anything but a girls color.
Just one hundred years!

Yes, but I was only a child at the time. What was I to know about the world and myself?

You didn’t cited me, did you?

I feel a lot of the ideas presented here are very hetero normative so here is my perspective.
I think humans’ attraction is more learnt than natural/evolved. Human and primate societies change their qualities of good mates too quickly for evolution to catch up. From what I understand fetishes are functionally the same as more “normal” sexual attraction. An attraction to women is actually an attraction to many traits that the person associates with the concept of woman(this is the non hetero bit). A fetish is simply the brain learning an attraction off the beat path.

TL DR: I think your younger brain just saw a bunch of stuff that made it connect women,fat and attractive. For me I believe it was the idea of growing fat involving undressing(growing out of your clothes) and I was taught by media that nakedness was attractive.

I may be focusing too much on neural connections due but that’s how I see it.

I do not know about others, but my personal attraction derived from the transformation scene. Namely Bimbofication, and Hucow stuff.
Weight gain is a fairly natural progression from Hucow related fetishes.

As for the reason why we have this particular fetish, it’s probably some brain trigger caused by wanting a well fed partner due to weight being associated with wealth and easy access to resources.

Plus, tubby men and women make for much better cuddles.

You take the problem in the wrong side.

The real question is not what is the origin of people loving chubby women, but why they stopped to love them and curves became unpopular.

In almost all civilization it was considered healthy for a woman to be chubby and since forever. There are some exception but globally it was the case.

But since 1910, things changed and the fashion movement put slim girls as the paragon of the beauty, their idea spreading in all civilizations with the cultural influence of United States. 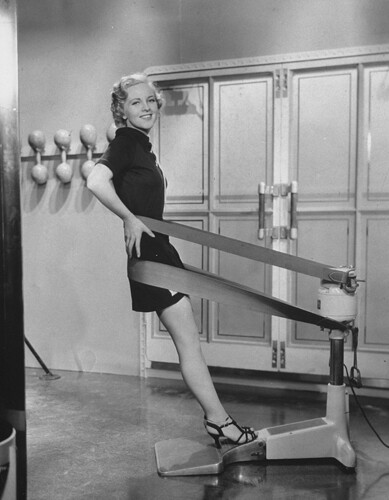 On a related note, I think the first material relating to the inflation fetish may have sprung up after the discovery of helium.

I remember always being more drawn to bigger girls, though what really solidified it for me was the famed blueberry scene from the Willy Wonka movies. Although I’m not into Blueberry itself the idea of watching a person just get bigger cemented itself firmly. And now I’m here, I guess

Yeah, about the blueberry scenes, the only thing I don’t like is how the scenes are widely-used in Photoshop projects where people copy-paste the heads of people, celebrities and fictional characters (real and animated) included, onto the Violet bodies.