I’ve been wanting to have my Final Fantasy XIV characters to be big in game for a while and thankfully there has been some good mods released to allow for this! I’ve compiled a list of mods, tools, and resources for people to mod and create mods. If anyone wants to comment other mods I can include in this list I will do my best to update this.

Follow the link and the installation instructions to install.

Custom launcher for FFXIV. Contribute to goatcorp/FFXIVQuickLauncher development by creating an account on GitHub.

Once that is installed you will need the Penumbra plugin as it is extremely useful for adding and trying mods quickly and easily without restarting the game!

Follow the instructions in this github at the bottom to install the plugin. 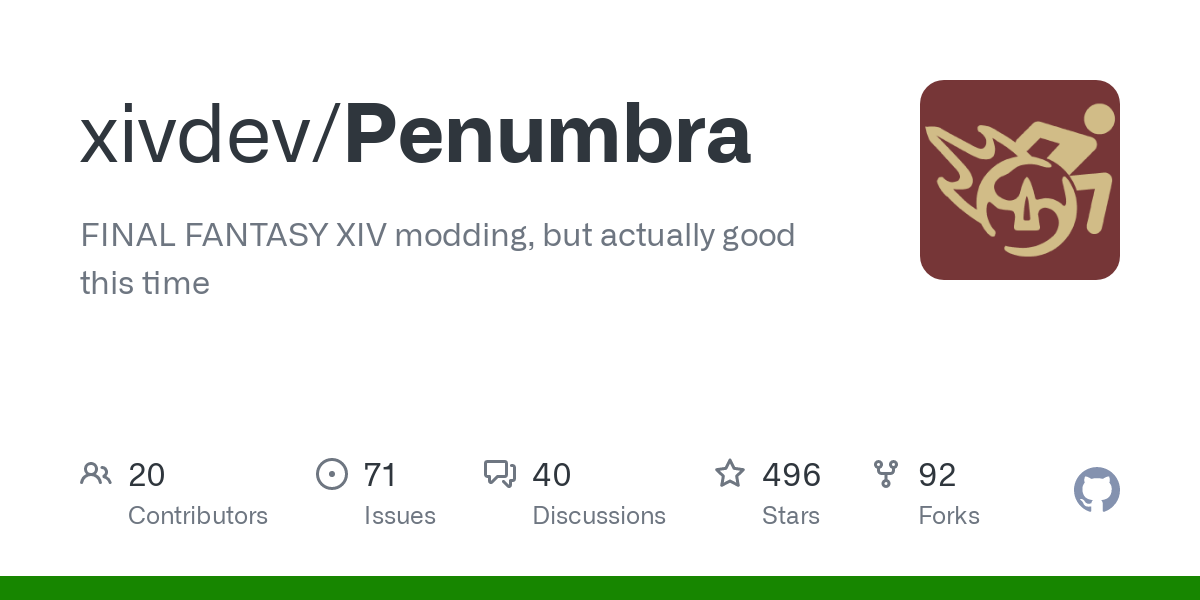 With penumbra installed, you can follow a series of tutorials penumbra has upon launching it in the game through the plugins list or by typing ‘/penumbra’ in the chat

Now let’s get some mods!
Disclaimer: There are many modding sites and NSFW mods will require you to create accounts for these websites. Many people have problems with XIVModArchive and its moderation but for the time being most of the mods are available there so I will use those links until a better website hosts these mods.

Notes: Has the most compatibility with other mods that use bibo+ as a base. Has many options for genitalia and sizes.

Notes: Has compatibility with Tight and Firm 3, less popular than bibo+, but popular. Has size options.

Now for most of these body changes to show for your character, you either need them to be naked or have specific clothing mods that work with the above mods. ChuB TF3 has no clothing mods at the moment but Bibo+ Plush has many clothing mods made by the creator.

Plugins and other tools to make your character big 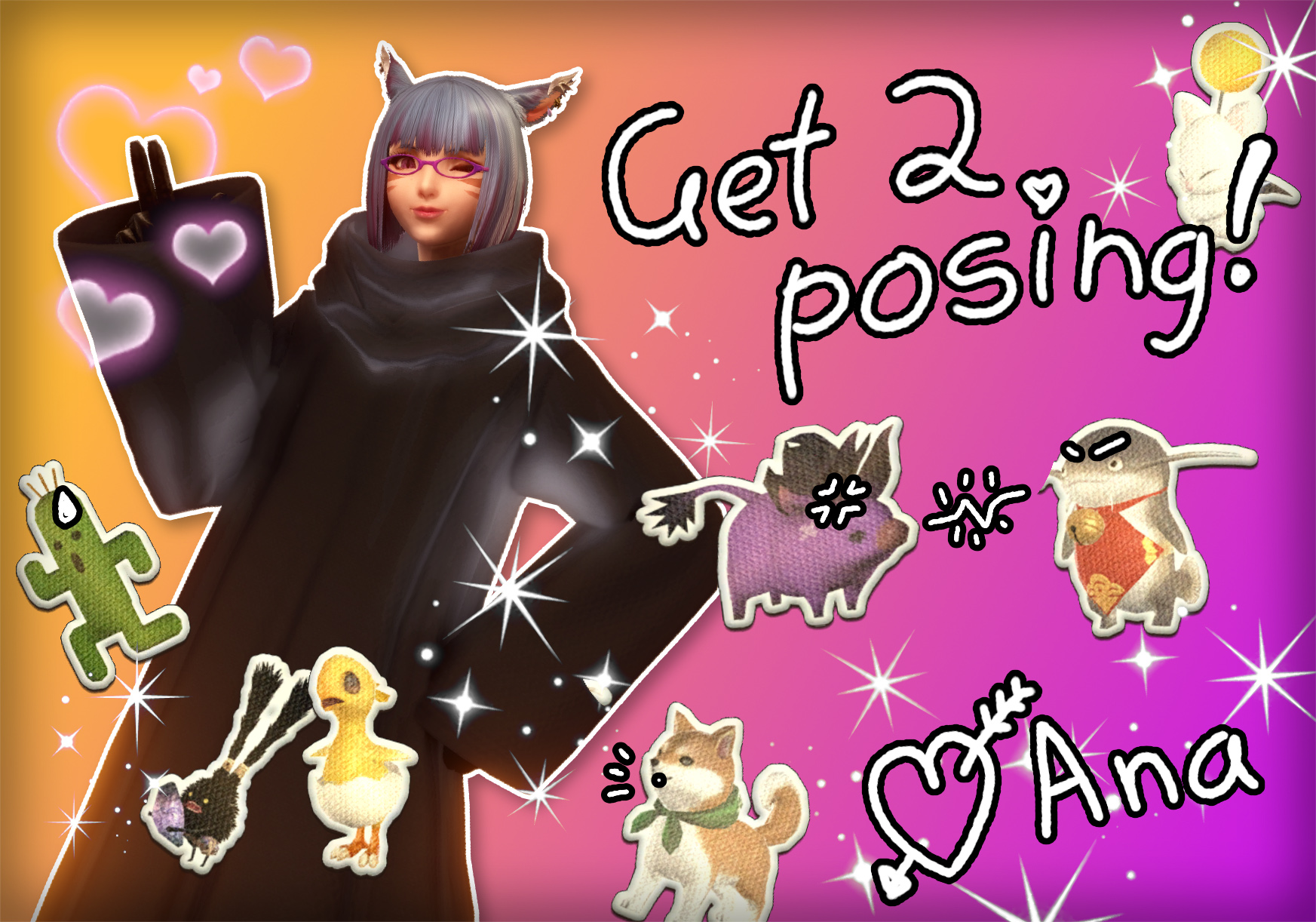 GitHub - imchillin/Anamnesis: A standalone tool that allows the user a...

This is a third party program separate from the quick launcher. This tool allows for you to use the /gpose command in game and alter the character, scene and more further. Using this tool you can scale the character to be larger by just manually scaling the bones. You can also pose the character further for detailed screenshots. Scaling the character will only appear in the /gpose mode and will not be available during normal gameplay, however… 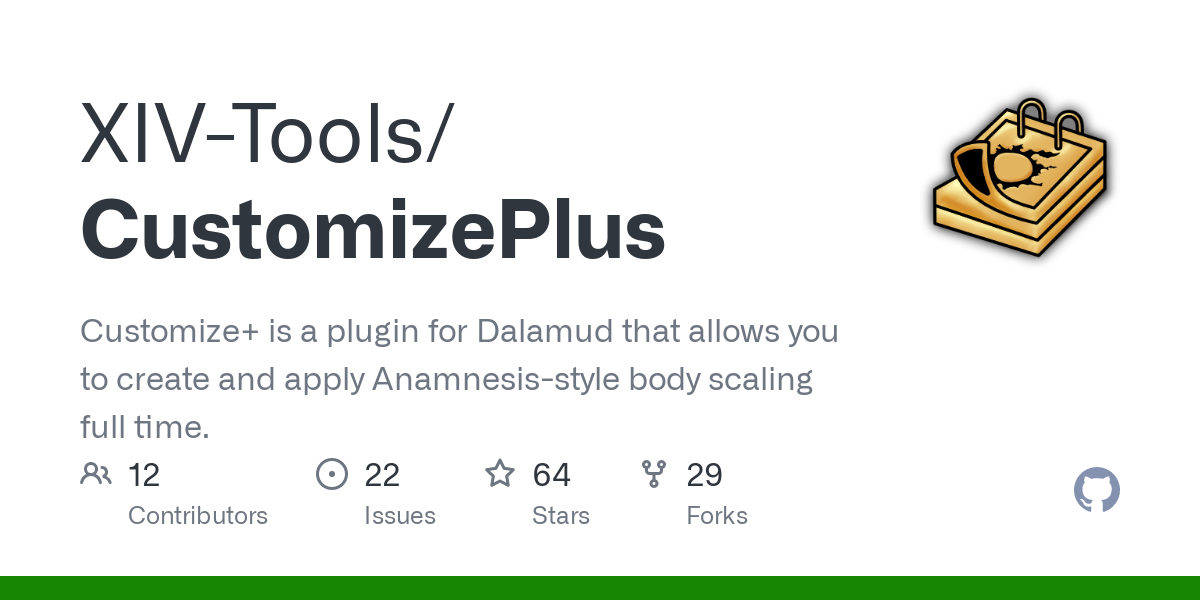 Contribute to XIV-Tools/CustomizePlus development by creating an account on GitHub.

This is a plugin which can be installed with the quick launcher. This tool allows for you to have the scaled sizes of your character to be available at all times or on other characters at all times. All you need to do is save the scaled pose from Anamnesis and load it into Customize Plus. If you want to just take some pre-made scales, they are here. 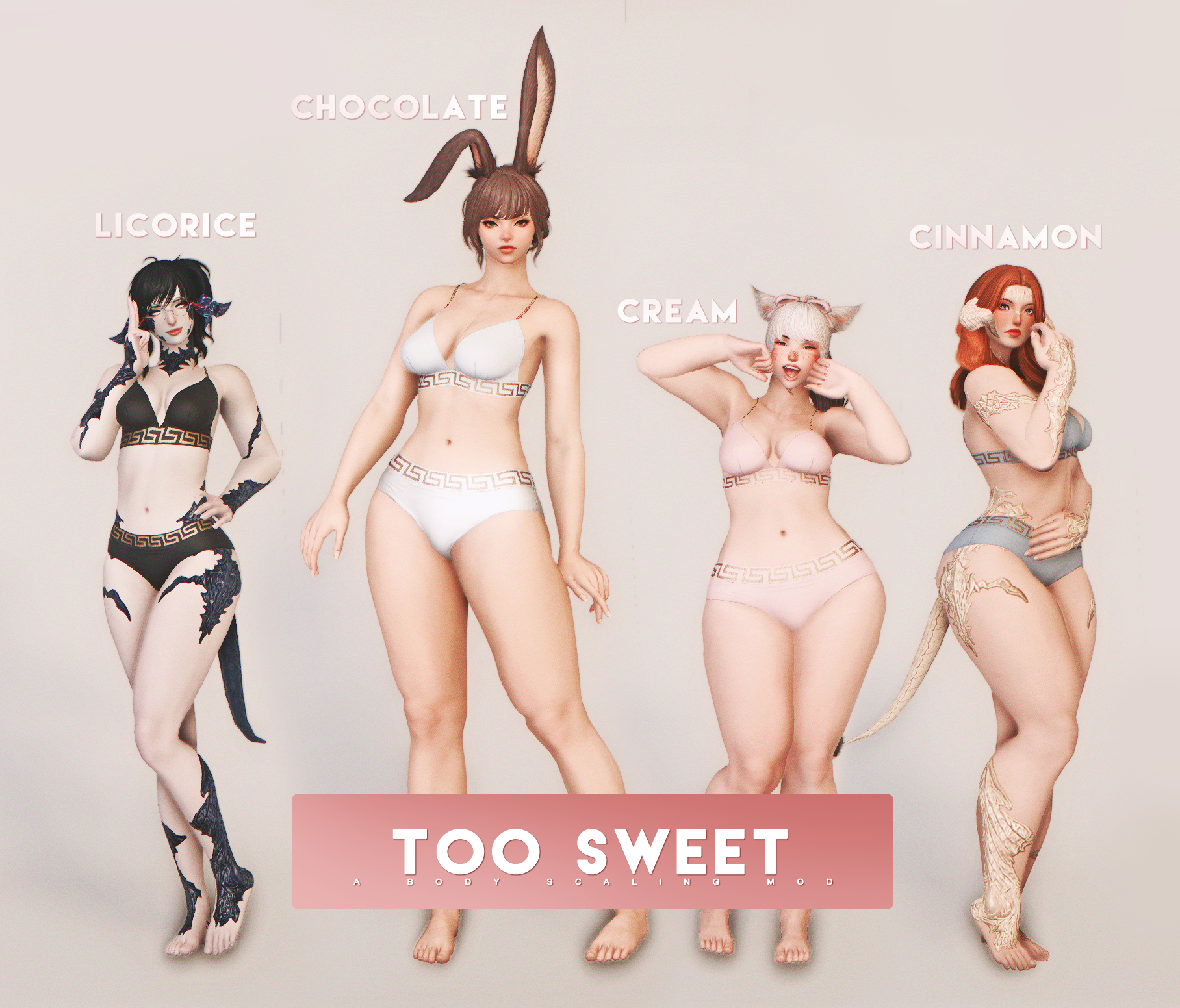 Four body scaling options with differences that range from minor to major. Choose the one that best suits your character, edit them as you wish, make and upload poses made with these body scalings in mind — let your heart guide you. ♡ [ Meant for use...

I have found these to be extremely useful, especially in conjunction with the body mods. 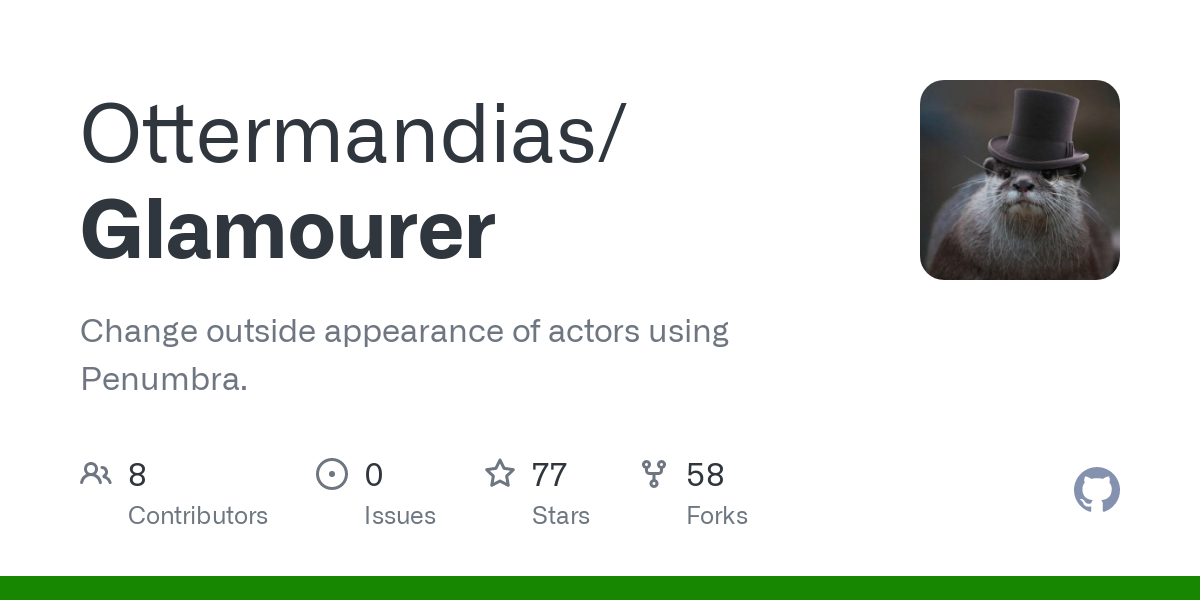 This plugin is installed in the quick launcher and allows you to customize your character’s appearance without the use of fantasia or collecting gear. This can be helpful when testing the mods and how they look with other characters. You can save designs and characters so you may use them wherever or tie them to change to the designs when you change jobs.
This plugin is also necessary if you want to use the next plugin… 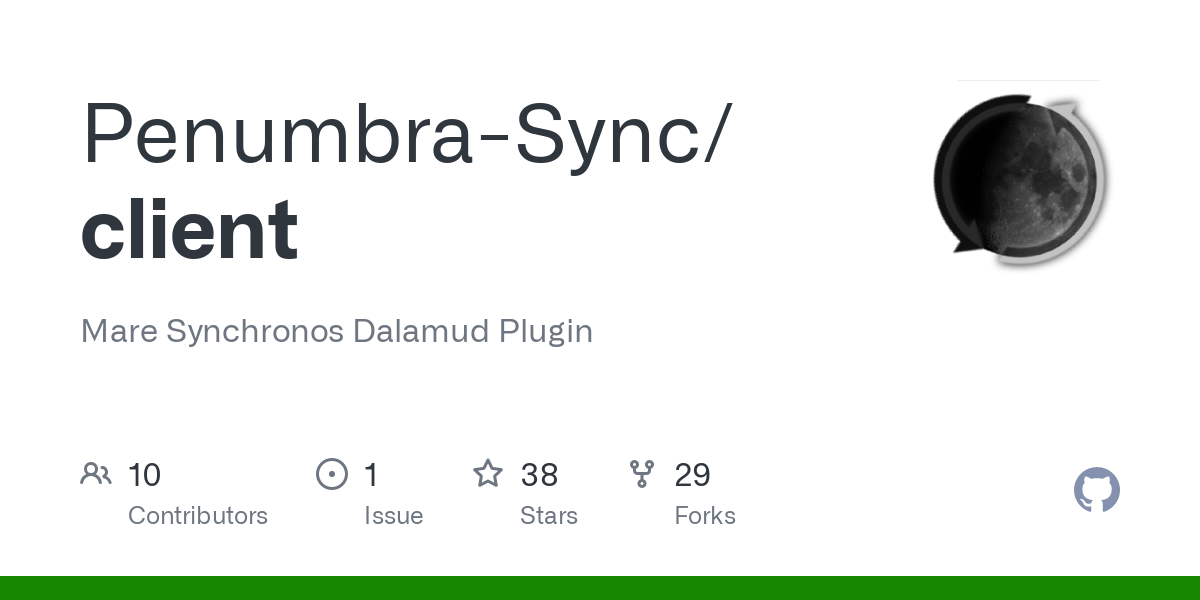 This plugin installs into the quick launcher and lets you and your friends see each other’s mods! Now you can RP or just show off that large body to others! There is quite a process to signing up for Mare Synchronos, which involves connecting to their discord server. I will include a page that involves a step-by-step guide to signing up for Mare Synchronos. Once you are all set up with Mare Synchronos, you can share your code with your friends so white list them to seeing your mods. Reminder that this REQUIRES Glamourer, the plugin above.

Tools for Modders
Below is a XIVMod Archive post that directs to a lot of useful tutorials for modding in FFXIV. There is too much to go over depending on what and how you want to mod things so I will just leave this here for now.

NOTES
I hope this post was helpful! I love FFXIV and I know others do too! I also know lots of people have plus-sized OCs in this game and I think they should have the tools to represent their characters to the best of their ability!

I might make a follow up post, or update this one to include male mods. I do not use or have interest in male mods but I would like to include everyone’s interests if possible.