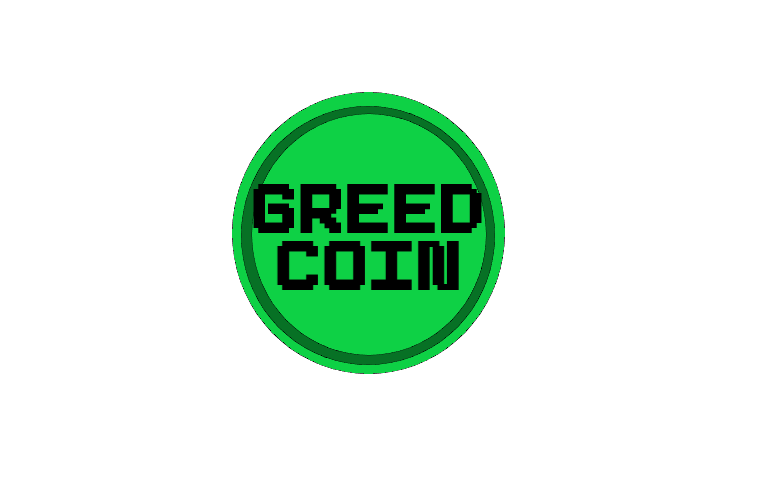 Greed coin logo757×492 5.11 KB
A rogue AI named SKREEN.EXE created a game to show off their Cyrpto currency to lure in Greedy suckers to collect.
Featuring Weight gain elements as well as a vibing sound track and unique Voice track design you’ll give in and OBEY SKREEN.EXE 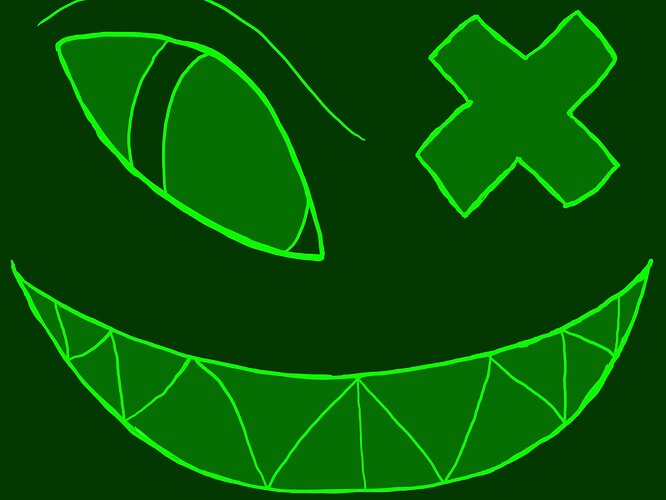 I had the idea for the game a short while and adapted it to the theme of this years jam, it’s also the official debut of my OC SKREEN.EXE.
I will be continuing work on the game through the jam where I can and i hope you folks enjoy it 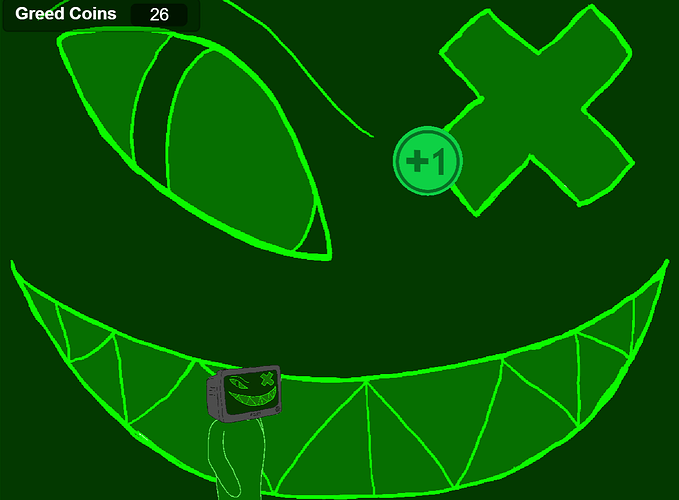 you know, the gameplay loop is basically just the theme.
you could add damaging entities and less coins per wg.

Done, updates are done and I was up at 6am doing them XD

Woke up to develop more at 6:30am and managed all that in under 90 minutes.
Work will continue over the weekend on clean up and potential later stage dialogue.

The game doesn’t want to load for me, it’s just stuck at 0%.

have patience, it will load

Sorry about that, i had to convert it from Scratch sb3 file to a HTML file to get it to work on itch. Since its a browser game too it should load but sometimes slowly depending on browser, apparently it works good on phones though if you wish to try it there.

I know you said not to if I haven’t made a game before, but I have a few critiques: having a start screen would be nice (My first indication that the game was downloaded was you telling me I failed), also the ending screens (both win and lose) loop, and I couldn’t find a way to start over without restarting the browser. But hey, it was fun, had fattening, and I agree, capybaras are great.

i like the idea though can thier be a dark mode? like my eyes hurt looking at the green for so long

The green is intentional as i was going for an old computer screen look. I apologise for any issues caused.

Start screens are hard to make on scratch but ill see what i can do, as for the ending i will be adding endless mode to the game before the deadline.
SKREEN.EXE is currently recording more lines and they would love the extented company :3

Gotta be honest the dialogue really doesn’t work for me since it sounds very off in a way I just can’t describe.

I like the concept of it getting easier to consume more and more as you gain more weight and coins, I think it works with the jam theme (greed) really well.

However, I did have some difficulties with hearing the dialog. At some points I would miss voice lines, since I couldn’t really make them out with my laptop’s not very high quaility speaker.

This could be fixed by some subtitles, which shouldn’t be too hard to add. If you move the voice recordings that play while playing the game to a new sprite, you can make the new sprite’s costumes into subtites for the game. The new sprite’s script may look something like this:

Which, when the costumes are completed, could look something like this mock-up: 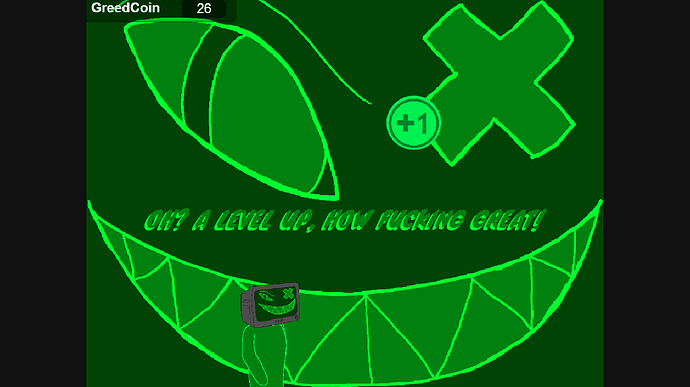 Overall, I think that Greed Coin has great potential concept, having the weight gain aspects be a metaphor for the theme of greed, as opposed to just a side effect of it. Though it could use some polish-- like animations or the AI’s mouth moving, it is off to a good start.

Anyways, keep up the good work! And feel free to let me know if you need help with anything in Scratch.

Theres more dialogue VA, extended gameplay and a twist element in the works hopefully being finished by friday, if i get more time i can add the subs.
Its nice to find another scratch dev in this community

Its very simple but works for a game, nice replyable as well fitting to the topic of Greed as well, Good use of the weight gain topic as well.

I do have a few problems those being:
Challenge is minor, As there really no objects to avoid or bonus to get
Characters getting bigger, Not that he doesn’t get big but it feels like he should get MUCH bigger when playing acting as both a pro and con
And 1 finally one but thats more Personally Opinion then really issue with the game so I will not say it

Overall good game to past the time and nice music & voices ^^

it’s getting updated as we speak. final build will be out within the next day or two and I promise it’ll be challenging and fitting the wildcards more

It is safe to say I am officially finished with this project although SKREEN.EXE will appear in the future amongst my OCs, I had a lot of computer troubles this jam but was happy to get something out that I am proud of that fits the theme and hopefully qualifies in two of the three wildcards.
Scratch is an interesting engine to work with which I would really recommend and I hope you guys check it out for yourselves if you are new to game development.
I would personally like to express a thank you to all those who have supported me emotionally throughout the development process in its ups and downs and I hope you stick around for future projects I may have.

Such an amazing game!