The Greedy Goblin Guild Master is a Rougelite game created for the weightgaming game jam of August 2022 and is inspired by many different fetish RPGMaker games such as Some Bullshit, Apostles, and more! (And totally is just ripping off of the Brewmaster from Some Bullshit, Nerds and Clinko are stars of Character Design)

Details for the game: You play as Gary, and young new adventurer who goes out into the world after spending maybe too many years being isolated on a farm. His first task? Get signed up for at a local Adventure’s Guild. The problem? He went to the goblins.

The goblin guild master takes advantage over Gary’s naive and guillable nature to have him run through the “endless dungeon of foreverness” collecting treasures and people she had sent in before him.

In reality this dungeon isn’t actually infinite, but instead a pool of rooms randomized every time. Which can make it seem infinite. But the monsters and rewards will get stronger and better the deeper you go in. But if you die, you simply return back to the guild with all of your stuff. Then you must start again at floor 1 and begin the climb again. (Until you unlock something later on).

Truthfully there are only 10 rewards. 5 people to save and 5 crystals to obtain. Each time you save someone, you may unlock a new ability of the guild. Where as when you get a crystal, well the Guild Master seems to “improve”. The goal of the game is to get all rewards and see the ending of the game after floor 100.

Rough completion time is around 15-25 minutes if you’re speeding through it.

Author’s Notes: I hope you have fun playing this, or at least some semblance of fun, haha. This is the first time I seriously thought about creating a game for this gamejam and decided to participate. If you encounter any bugs please let me know so I can fix them asap either on itch.io or here on weightgaming (thanks in advance if you do). I would also like to give a word of caution by saying that this is probably not yet at 100% polish, but is feature complete to where I am happy with it for the time being. Things I want to add but are not in the game are: better combat balance, more weapon variety, and item shop and more epilogue stuff. So basically expect the combat to be very lack luster at the moment. But for now this is fine I think, even though this does have some areas in can definitely be improved on. (This is my first game after all, which totally doesn’t make me super nervous or stressed out. Nope cool as a cucumber over here… ).

To play the game, download the zip file, uncompress it, and launch the game.exe found in the folder. Have fun.

Update V1.0.1 Bug fix: Fixed a bug where treasure chests could be opened infinitely again and again on the same floor resulting in infinite money. 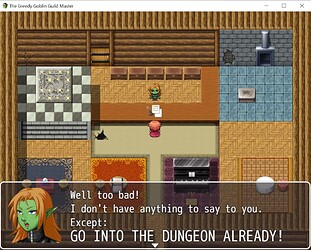 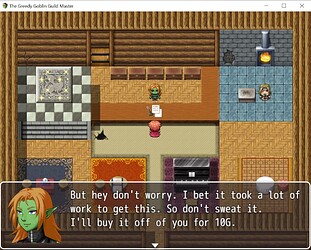 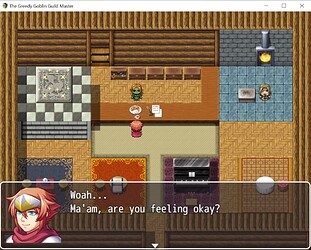 Umm. Maybe there’s something wrong with my computer, but I don’t see a game when I click on the link. It just shows a 404 page.

Nah I was so worried about making this thread that I forgot to publish the actual itch.io page. Should be okay now though… hopefully.

Update V1.0.1 Bug fix: Fixed a bug where treasure chests could be opened infinitely again and again on the same floor resulting in infinite money.

itch.io should have the updated file.

Pretty decent game. The writing was fun and Gary’s arc was enjoyable. Though I do wonder why Gary is named Harold in the menu. Also, the steel sword seems to not work and there aren’t enough things to buy. After I realized that the best weapon in the game was 50g I just skipped past everything else and only really stopped to deliver the orbs. If there’s time, maybe adding a mechanical reason for the player to want to hoard gold might be good. The orcs are a pain to fight with just an iron sword and anything above that can easily kill you. Maybe a few items available after a vacation or two might help even the odds? For a price of course.

Hey glad you liked it. Writing was something I tried to get at least decent. So, I am glad it’s enjoyable. As for Gary being Harold in the menus, that’s a bug, which I have fixed now. Also yeah the weapons and combat are not my forte. Programming is the thing I have a good grasp on. Writing I can do decently enough with. But designing combat is a whole other beast. I’ll see if I can’t add a few more stronger swords at heftier prices to work as a gold sink. Maybe I’ll add some amours as well for defense, since monsters don’t give you exp in this game. (Or maybe I can also add exp in as well…) Either way thanks for playing and giving feedback, really appreciate it. You’ve given me things to think about for improvements.

So, there’s a couple bugs. That Steel Sword the blacksmith has costs 0 gold and can’t be equipped. And I dunno about the other monsters, but when the Crawling Messes insta-kill you, you don’t go back to the guild or anything, it just leaves you at 1 HP. And because they’re so fast they instantly attack you again, so it’s impossible to get out of it. That’s a game-breaking bug.

And just in general, there’s no real point to fighting monsters or collecting gold that I can see. The blacksmith doesn’t update their inventory so there’s nothing to buy after the iron sword, and you don’t level up or anything, so all there is to do is get to the stairs as fast as you can.

The crawling messes are way too fast and the insta kill is pretty difficult, but I was able to get past all of them and make it to the ending since battles are only triggered when you walk into and enemy. On the levels with the messes, they will just run all around you but never attack you unless you run into them, so if you can time it right, you can just run past all of them. If you do get into a battle with them, I didn’t test this extensively mind you, you can flee them and it worked for me every time. With these two strats in mind, you can get past those final floors and beat the game.

Edit: The reason I say this is just because you called it game breaking when you can still “technically” beat the game. I don’t mean to be rude, I just over explain things.

Sorry, but it’s still gamebreaking when you get stuck in a corner and they never stop running into you. It was impossible to move away from them before they started another combat. I managed to brute force my way through by being lucky enough to not get chased down and cornerfucked again, though. But mostly because they randomly turned into minotaurs twice, which I could actually kill to get past them.

I’m not saying that I think they should stay super sonic, I’m just saying that it is possible in some way to get past them. I can definitely see how having them in the corner with you is very game breaking in that they don’t actually kill you. I think a good alternative to the speedy boys could be all of the previous enemies thrown onto the levels. It doesn’t add anything overpowered and still provides a harder challenge to the previous levels.

Hey yeah sorry about the bs “toughness” of the crawling mess monsters. I’ve turned down their speed a bit and lowered their stats so they don’t always insta kill the player. I’ve also added the steal sword to actually work along side a new black steel sword for 1000g and new amours as well at the blacksmith.
Just uploading the update now, so it should be ready soon.

Should hopefully make fights a bit easier and less annoying.

To answer your question: No you can’t reach her and there’s no way of interacting with her without the dev tool. Even then I don’t think I had an interaction in place for her. I wanted to add something to that room to give it a bit more mystery to it, so I added her and had her face the player at all times.

This was a simple and effective game and premise, using a fair bit of RPGM stock assets. And yet some of the level designs did touch me as being artfully crafted, add some creative flourishes to proceedings.

Whilst it is very much an “RPG Maker” game so people will make of it what they will, there are some neat little touches that speak to the creator’s talent at least.

I also loved the gear shift in intensity with the turbo crawling masses. Added some much needed piquancy to proceedings! 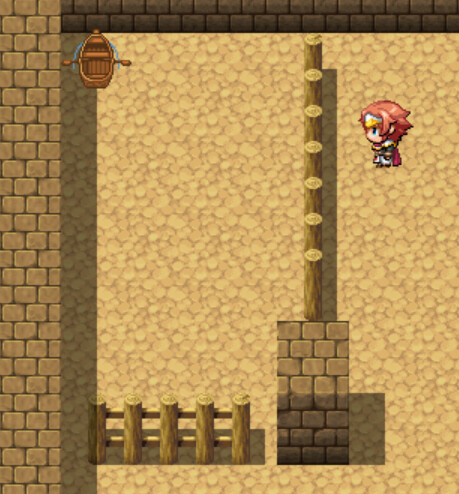 i was a little entertained, but the shield you spawn with seems to block most all damage, so unless the player manually unequips it the already easy-to-avoid encounters become meaningless.
Why is there a boat in prison in this room. what is the boat lore