How to pack and unpack Starbound mods

I’ve seen the question pop up frequently, so I wanted to give an answer to it and wrote this guide. There are actually a few different ways to go about this, so let’s get into it.

I’m coming to add. If you’re under the assumption you have to unpack the pak file to use the mod. Stop. The pak file is the recommended format for it to be in. As all you have to do is drag the pak file into the mods folder and it works. Unpacking should only be done if you’re that curious about in game assets or maybe want to work to make your own addons.

Several games use the .pak extension for their asset files. The problem is that these files are not all created equally, and Starbound is all alone with its type of .pak files. Therefore, only information specifically for Starbound .pak files is valid for Starbound mods, and .pak's from other games have no relevance here whatsoever.

Thankfully, every Starbound installation comes with all the tools necessary for packing and unpacking the asset files. For Windows users, they are located in the win32 subfolder of your installation, right next to your storage, mods and other folders. 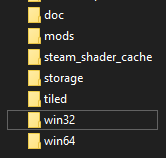 These two programs, asset_packer.exe and asset_unpacker.exe are all we need for packing and unpacking. But they are written as command line tools, so just starting them like that will be no good. If you are comfortable with a little typing, check out the “Via Command Line” section. Otherwise, there is a “Drag And Drop” section, using a rather hidden Windows feature to make things simpler.

Good preparation can save a lot of hassle down the line. In this specific case, it would be best to create a separate “workspace” folder somewhere to tinker around with the mods. Create it, open it up, and keep the window around for later. It may come in handy in more ways than one.
Another handy window to have around would be the win32 folder mentioned above. Open it and keep it around as well.

Via Command Line - The Way It Was Intended

Via Drag And Drop - A Hidden Windows Feature

For this one you really need the two windows mentioned in the “Preparation” section. Arrange them side by side on your screen.

Both packing and unpacking this way requires you to prepare a destination for the results. In other words, you always need a folder and a .pak file, no matter which way you go.
If you want to unpack, create a new folder inside your workspace folder.
If you want to pack, create a new text file and rename it to have the extension .pak instead of .txt. The packer doesn’t care about the extension, but Starbound itself does.
Apart from the extension, the names of the folders and files do not matter, so you can be creative there.

Now that you have both a folder and a .pak file, select them both in the explorer. (If you don’t have the checkboxes for the selection, you can add items to the selection by holding [Ctrl] while you click them.)

Here comes the part that requires a little precision. We will drag-and-drop these two things somewhere else, but it’s important which of the two your mouse is over when picking them up. If you want to unpack, hover over the .pak file before clicking. If you want to pack, grab the folder instead.

Now, with both things at your cursor, drag them over to the other window and drop them on either asset_packer.exe or asset_unpacker.exe, depending on what you want to do. The tooltip should read “+ Open with <program>”. (I’m using a German Windows installation, so I have some different text on my screenshots.)

As you let go, you should see a black window pop up and disappear again. It may only flash up quickly or stay around for a few minutes, depending on how big the mod is you are (un)packing. As soon as that window is gone, the deed should be done. Either the .pak file is now filled with the mod contents (if you packed), or the folder is (if you unpacked). If nothing happened, you may have picked up the wrong file.

Anyway, this is all there is to this. Happy packing!

For those that are wondering: This drag-and-drop with the “+ Open with …” is doing the same thing as we do manually in the command line section up above, only that Windows automatically figures out the full file paths to make things work without any funny shortcuts. The distinction which file is picked up for the drag tells Windows which one to put first into the list of arguments for the program.

Bonus: Packing Helpers - For The Laziest Of People

Packing Helpers.zip (742 Bytes)
For those that still think this is too much work, I’ve put together some little scripts that they can use. They only need a little bit of one-time preparation to use.

Download the scripts, put them into your workspace folder and open up setPath.bat via [Right-Click] → “Edit”. There is a single line in there, and for most people that should already be the correct one. To make sure though, find your Starbound installation and the win32 folder within. At the top of the window, click on the far right side of the “breadcrumb bar” to highlight the contents. [Ctrl]-[C] to copy the path.

You can close the win32 folder now. Go back to where you edit setPath.bat, and replace everything right behind the semicolon ; with what you just copied. Save and exit.

Congratulations! These preparations have to be done only once, so you are good to go now.

pack.bat and unpack.bat work very similar to asset_packer.exe and asset_unpacker.exe in the “Drag and Drop” section explained above: Take file and folder and drop them on the corresponding .bat script. (These scripts just redirect to the proper packing programs.) There are two differences, though:

Update: These scripts can now be used if they aren’t in the same folder as the mods you want to (un)pack.

I hope this ‘little’ post helps people out at least a bit, and also reduces the amount of questions in other places about this topic. Feel free to leave critique and suggestions for this guide and the little helper I provided, and feel free to direct people here in case they have questions.

Have fun and happy modding!

This is great, thank you for the post. I’m sure this will be very helpful.

And now - Linux
To get to the directory of the binaries (this is the default directory of course, if you have installed Starbound somewhere else, the path should be different):
cd ~/.steam/steam/steamapps/common/Starbound/linux

EDIT: (Apart from the paths used, this is no different on macOS)

your a saint and i love you for this

My bad. Either have the scripts in the same folder as the mods, or get the updated version of the scripts I just posted. (You only need to replace pack.bat and unpack.bat, setPath.bat didn’t change.)

eyyy it works now thanks

I’m coming to add. If you’re under the assumption you have to unpack the pak file to use the mod. Stop. The pak file is the recommended format for it to be in. As all you have to do is drag the pak file into the mods folder and it works. Unpacking should only be done if you’re that curious about in game assets or maybe want to work to make your own addons.