The village kobolds are back, bigger and better than ever before! Plunge the depths of a randomized dungeon to win a vacation that you oh-so-desperately deserve. 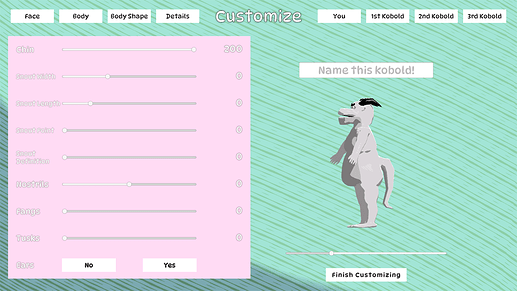 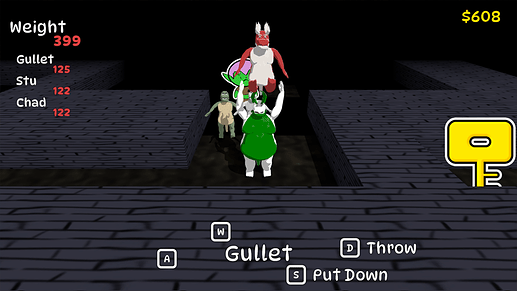 This is pretty cool, but there’s some janky bits, like picking stuff up and putting it down. Maybe just using spacebar to pick up and put down objects would work better?

Also, I feel like the spawn rate of enemies is way too high. It’s not that they’re hard to deal with, it’s just tedious because they keep piling up before you can kill them.

Spawn rate is a little high at times, and I’d also argue enemy health is too darn high (or at least scales too darn high when going down floors). Otherwise seems fairly neat.

Final update for the jam has been made:

Sound balancing is a bit off - e.g. footsteps are barely audible while the throw sound effect is fairly loud.

Dodging is a bit too cumbersome to be useful (which… I guess you are a bunch of portly draconics). Wailing away and pushing for stuns is more reliable.

Restaurant still feels like a bad trade vs. saving up for more vigor over time, though maybe once upgrades get expensive enough it’s more worth it?

quick question, will you ever continue development on kobold village?

I actually worked on it a little bit before starting this game; I’ll probably do a patch for it in the near future.

The game is pretty good, but I think one thing it could have used was more numbers visible to the player, For example damage numbers or enemy health bars. Ironically enough it feels like a lot of flailing with no obvious feedback.

This was really long and grindy. I’m not entirely sure why I stuck through with it to the end…
The basic gameplay idea is neat. I liked sending my kobolds off with my items.
There was enough here that was interesting to me that I finished it, I guess.
I rambled my thoughts into some bullet points.

I hope my comment doesn’t discourage you from making games and stuff. I clearly got some fun out of this game, considering I spent so long playing it as to see the end. I hope you’ll update the game. The game could end at floor, like, 6, instead of 10; or, there could be more things to see, like more enemy types, more room types, et cetera. I really couldn’t recommend this game as-is to anyone, but I think you’re onto something with it. Don’t let my overall negative tone fool you! You had me hooked!

For others, here’s what the ending screen looks like. After you win, the NPC tells you that there’s some sort of second quest, but I’m really, really not gonna do that. I’d share my save file if I knew where save files were saved. 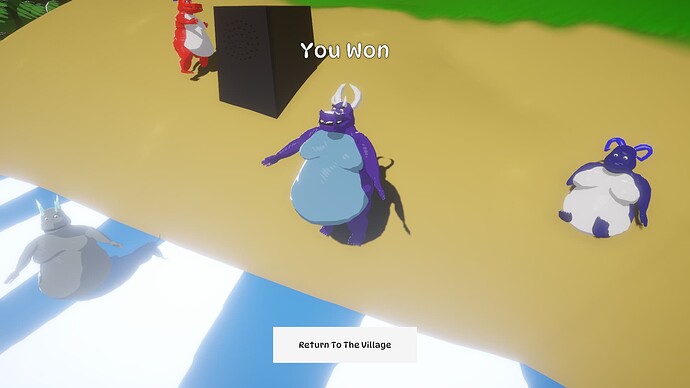 Much smoother progression now. Felt a tad on the easy side this time, actually, though that was likely because I had already spent a while grinding my team up in the earlier version. Still had a dicey key situation once, but felt less of a roll of the dice.

I’d love to try it, but for some reason i cannot download it off of google drive. Probably a browser issue.

Also, I’d like to say I really do appreciate giving us the ability to customise our Kobolds, it’s much easier to tell them apart when we can give them custom names and appearances.

the slider menus are extremely finnicky, i hope that gets fixed, or maybe no sliders at all