After procrastinating for almost two weeks, i decided i would participate this year, and with only 24 hours on the clock, finish a game. 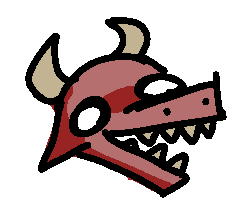 problem is, my engine ate shit and tripped at the finish line, i couldn’t get the game to build. i spend an hour, the whole grace period, tweaking the build settings in godot, all crashes. This version is the last export that works, and it has a bug where the fireball and the knife attacks don’t do anything. I’m really glad i pushed through and made this game, but i’m really sad i can’t submit what i have in the editor right now.

Edit: On the bright side, there’s still a game here. The old build has a bug where the non-basic attacks are broken, which means the attack upgrade system is pointless, but the hp upgrade still works.
The deckbuilding might be non-functional, but there’s still topdown shooter gameplay. This game was inspired by Vampire Survivors: waves of enemies approach you, closing in from all directions, and you must use spatial strategy to avoid certain death - while also collecting as much loot as possible.

Hope you continue work on this after the jam! Would love to see the kobold’s sprite change as things progress.

very simple and not too hard to get to grips with

Good start but it needs work.

Solid little thing! Took me a bit to realize what was happening but very quickly fell into that Feeding Frenzy or Tasty Planet feeling. I think what caught my attention the most was the limited time on the upgrade before Greed would be automatically picked. Not the most accessible thing, but having a limited time to make a decision can be a lot of fun - especially since that’ll lead to bad ones lol.

Ultimately, good you got something together, even if it’s not everything you wanted.