LINK HERE: AEC Sandbox by Yttreia
(Now you don’t have to download the game to play it anymore, though you still CAN download if you want!)

As of this moment, there’s about, well, a metric fuckton of words, most of which is bellies, boobs and bodies getting bigger in different ways, all female, mostly anthro. WG, inflation, expansion, whatever else in that general idea.

I MOVED THE CHANGELOG TO THE GAME, CHECK THE INTRO 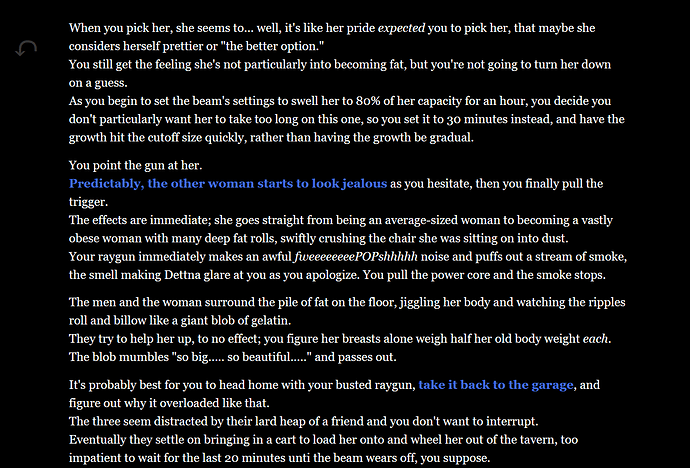 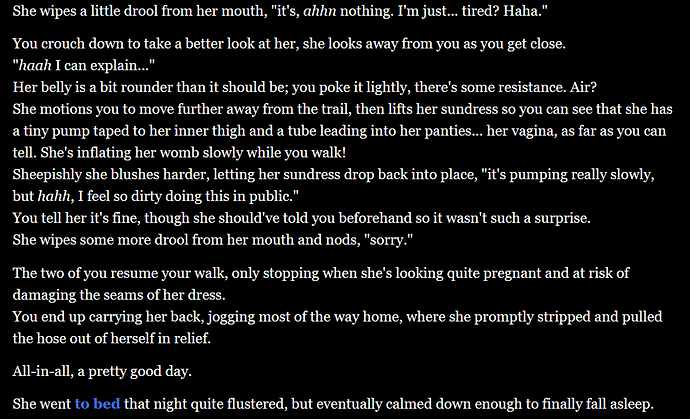 Just curious, but will you ever include weight gain in here? Or is it more just inflations and expansions?

Weight gain is coming, yeah. I’ll make sure to cover most “things getting bigger” fetishes along the way.
My goal is to add at least one WG scene to each character.

There’s actually a forcefeeding scene in the tavern already, but she just ends up stuffed, drunk, and with a belly.

Ahh, nice! I’ll be sure to keep an eye out

The newest update added some human WG content, plus a bunch of other stuff. Gained about 4k words, IIRC.
EDIT: this post is old, I’ve added more, including a fun tease.

Has anyone found the Fay easter egg yet?

“Secret” might be a better word. It’s a reward for having good eyesight!

EDIT: ended the poll, it’s gone long enough now, I think. The next update should contain another secret or two; I even added an easter egg counter on the intro page that says how many secrets are in the game.
EDIT2: there’s three secrets now.

Text games are so funky, I’ll write up 5k words and it goes up like 5kb in size. My copy of the game has 30k words and it only takes up 492kb of space!

Dumping the changelog here to bump the thread:
v.010.1
-Damn it, forgot to delete the warning on the office choices. Fixed
-Fixed some other thing I forgot, too

v.010.2
-Built a CCTV viewer node tree in the office; you can “watch” recordings of things that have happened. Also added a few entries
-Another easter egg
-Added in the “disaster” section of the recordings; most of this will NOT be sexy
-New Dettna recording
-More recordings, yadda yadda. Definitely cutting back on reporting every time I add a new one

v.011.0
-Fixed a typo, saw a second one, then misplaced it before I could fix it
-Removed the easter egg counter
-Restructured the CCTV viewer a bit and moved the “bad” stuff into its own node
-More CCTV content
-More typos. I might start using the proofreading feature in Twine if I keep finding random ones like this
-Eh, moved all of the CCTV content into the groups; easier to manage and makes the nodes look nicer, too
-Added a long Saedi dream chain

Needless to say, the game is getting close to 50k words now.
Also, heck, dead thread. Might be a big downside to hosting the game on Itch, there isn’t enough reason NOT to just bookmark the game there and skip this site altogether for most users.

Just passing to say I love your commitment to this project, man.

The thread might have gone quiet, but there are always lurkers who appreciate your work.

We just don’t talk much.

I just kinda wish people would start suggesting things, or complaining about the game or something, here or on my other pages. I like when people complain about my stuff (as long as it’s not “eww, furries” or “ewww, inflation”), but I think these days people are more afraid of saying anything because it’s considered “toxic”.

Trying to aim for updates once a week, but I keep catching myself updating sooner than that. Thankfully I’ve been pretty busy IRL the last week, so that forced me to delay things to a more reasonable pace, heh.
Dec 12 should be the next update, unless I suddenly decide to drop an update sooner.

EDIT: Nope, updated on the 11th instead.

Now my priority is mostly going to be 3D again, but I’m gladly taking requests and suggestions for the game, anyway.
No strings attached, just toss things at me, (preferably on the Itch page), and I’ll put it in. I don’t know if anyone’s going to take up on the offer, though, my game really doesn’t get talked about at all, I think people get turned off by the lack of pictures.

You already posted that request on the Itch page, where I said yes.

Eh, probably wont do lewd stuff to the MC (outside of that one vague WG scene), besides, they’re human so a dinky little potbelly is all you’d get, heh. (Plus, the MC’s gender, weight, height, athletic ability, etc. are all so vague that it’d be pretty hard to write belly descriptions in that scenario.)
I really should get another garage tool or two added, though. I’m currently eyeing the two size changing ones, but no ETA there.

Had some account troubles with the Auth0 migration, but I’m back.
Still, always looking for more suggestions and requests for the game, I like requests and suggestions because it makes the game feel slightly less “me” and more “us.”
I don’t know if I’d ever be crazy enough to take actual scene submissions, but even that would be pretty neat.