So, I’m someone who’s pretty interested in game design in general. I don’t really have a lot to actually show for it experience-wise other than having done some QA work, but nonetheless good game design is an important thing to me.

That said, I see a lot of games on here and their associated threads and I see lots of tiny issues that could easily have been avoided or done better, and I’d like to start a discussion on things to think about to improve your work.

I’ll start with the way people post about their games first, since I know more about what I want to say on that front. Generally people could handle their OPs way better (for the unfamiliar that means Original Post, as in the first post of a topic and generally where people put their game information and download links). In general people could stand to include more information in their OPs, and I don’t mean just adding more text, in fact sometimes less text is better. Rather, what I’d like to see more of is things like pictures of the game (even if it’s a text game a snippet could be useful).

Even including what engine a game uses could be potentially useful, since RPGMaker games take way longer to download than say a Quest game. It could even give a good idea of what type of game it is since certain engines are more widely used for making certain games (I mean you generally do expect an RPG from RPGMaker. Unity is way more wild card though).

Then there’s Formatting. Formatting refers to how you arrange your information, and clearer and cleaner is always better. Big blocks of text are easy to get lost in, but spacing things out (like I have a tendency to overdo, honestly) helps a lot with readability. How you choose to order your information can mean a lot too - in my experience images are usually included lower down in posts on things like ROM hacking or indie game forums, after the main synopsis of the project has been given, but usually before closing statements. If there’s a lot of images they usually chose one or two Choice images and then shove the rest under a clickthrough (usually this is done with Spoiler tags, but Weight Gaming seems to have the function as “hide details” under the gear icon).

Speaking of synopses, you should always try to describe your project as neatly and to-the-point as you can (which is probably something I need to get better at I mean look at all this text I could probably get my points across much faster). There’s nothing wrong with lovingly describing things, rather the idea is not to let your descriptions get away from you and turn into ramblings (again, I have that problem lol).

Finally on the topic of your OPs, consider adding important updates to them if your project is in-progress. You don’t need to keep a complete changelog or link to every post you’ve made in the thread, but highlighting new cool developments is always good, especially since not everyone will want to scroll through the entire topic to see updates. That said always remember to update the OP if you release a new download link. Letting important things like that get hidden among posts in the thread is a major issue.

As for ways to make games better, well, I’ll save that for a second post haha, this one’s gone on a bit and I’m not sure if this forum has text limits. But, hey, that’s another thing you can do: Make two posts. Often threads for mods, hacks, and indie games reserve the second post of the thread for things like updates or other important information they don’t necessarily want in the OP. If you’re aiming particularly high with your project or it’s a work in progress, consider if doing that would be beneficial to you!

Damn yeah that was long lmao. Will my post about game design be even longer? Hopefully not lol I’m here to give you some basics, not teach you the ins and outs of good game design. There’s plenty of people who have actually succeeded in finishing games who could give far better advice outside of bare basics, so I’ll mostly be addressing issues I see specifically on this forum.

So, number one: Start Small, Aim Lower. Everyone whose ever wanted to make games but hasn’t actually finished anything wants to make something way more ambitious than they’re equipped to deal with, and specifically when it comes to kink games I see it lead to a lot of games that never ever come close to being finished. Never start with making your dream game. Think of a game that seems easy to make and wouldn’t require much work, and then plan to make something easier than that. You gotta learn to draw a straight line before you can draw even a shitty smiley face, and in game design terms that means “learn to finish a game, no matter how basic, before you try to make anything worth showing others”. If that sounds a little too harsh, just remember to never let yourself get overwhelmed with wanting to have too many things in a project. You can always add more later, but getting something actually finished is the hardest step.

Second: Try not to let your game change its tone more than fits. This isn’t a problem I see much here but nonetheless is a problem, especially in kink games. What I’m talking about is keeping your goals for the “feel” of your project in sight. If you wan’t to make a generally positive game with your fetishes in it maybe you don’t want to have sudden dark or negative parts of the game that would create tone whiplash. I mean, if you wanna make something that’s dark and horny, by all means go ahead, but if I click on a game thinking it’s gonna be all happiness and fat tummies and then someone dies I’m gonna feel a bit weird yknow? Different but in the same vein is if you want to make a game that’s mostly about the kink but end up having too many unrelated story segments or puzzles or combat, that can also detract from what you were going for (but again can be a fine combination assuming you actually plan for it to be like that).

Third: For the love of god learn the importance of QA. This is a thing that regular game developers need to learn too, and a thing that’s very important to me, as someone who has done QA work (for indies that have released on Steam, so it’s more than nothing but not like it’s my profession). For those unaware, QA stands for Quality Assurance, and covers things like Bug Testing, Accessibility, and other more technical and businessy things that no one here is going to need to know. It basically amounts to having other eyes to look over your work before you go and show it off to the world, in case something really needs to be fixed. You should definitely also look over your own work, and make sure everything seems in order and working yourself, but a pair of fresh eyes may catch issues (or even just typos) that yours dont. The effective effort you need to do here? Just think about having a friend or two try your game before you post it online, so you don’t have to worry about 10 people getting stuck or laughing at an embarrassing typo you made.

Fourth and for now Final: This is a small and quick one, but if you’re making a game for a language that is not your first (I’ve seen a handful of non-English speakers make games for English audiences on here) please find a native speaker of the language to look over your work before posting it. This ties into the QA thing above but I feel like it needs a special shout out. Basically, unless you’re fluent in a language, trying to write for that language will probably end up with at least some awkward wording, and it’d be a shame for that to get in the way of the experience. So try to find someone who is fluent to help you out, not everyone on the internet is mean and scary, so I’m sure you’ll be able to find someone nice to help you!

And, well, that’s all I got for now. I hope something in all of this extreme-late-night tapping away helps someone, and hey, if you have any other tips for people wanting to make a game on here (especially with the gamejam coming up in the next few months) feel free to add. 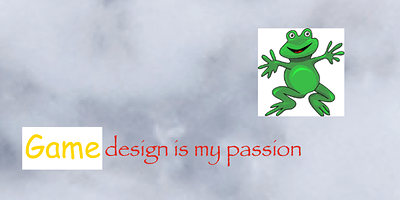 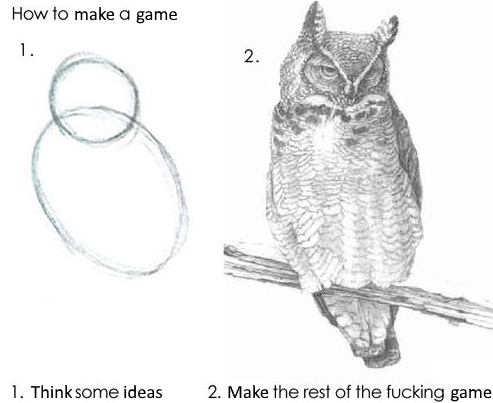 Some very good information in here to get started with, hopefully people will see this before they start their first project!

I’d like to also add that if you’re about to dive deep into making a game of some sorts but you aren’t sure if it’s going to appeal to anyone but you, consider this:

Basically the point that I am making is that if you wanna pour blood sweat and tears into a creative project, it’s important that you take the time to try and understand yourself via self reflection and the interaction with other people.

I hope that at least someone will find this useful!

Thanks for the tips! I’ll be sure to keep it on my mind!

With the caveat that not every suggestion is a good suggestion, regardless of popularity. This is the internet after all.

I think OP is a little condescending, but most of what they say is more or less accurate. That said, there is one thing that helps A LOT with the approach of making a basic game first, before expanding on it. That is