I just finished updating a sprite I’m working on, and I would love some feedback. It’s for an RPG Maker game using some half-kaizer sprite templates provided by Grimimic. So far I like what I have. The clothing colors might change, and her hair may wind up different, but I like the outfit I have for her. Currently I only have a front view and back view.

I wanted to take some inspiration from Faye Valentine’s outfit in Cowboy Bebop. The character design with the suspenders, shorts, and flowy top always intrigued me. I gave this character the similar little cutout on the front of Faye’s shorts by having my character’s shorts be unbuttoned, so her belly can freely grow. She also has a heavily modified kimono for a top. It’s meant to be loose, so I tried to give it some asymmetry. Much of it has been cut from the length, and the sleeves have been shortened. There are canonical reasons for this (and I have some Japanese RPG Maker MV assets I wanted to have a reason to use). I like the character design in the Currently Untitled Stuffing RPG, and I love the straps on Phage’s hips. That tied well in to Faye’s suspenders, so I added them to the unbuttoned pants. I don’t really know hoe well they will read, but I definitely want them in the final design. 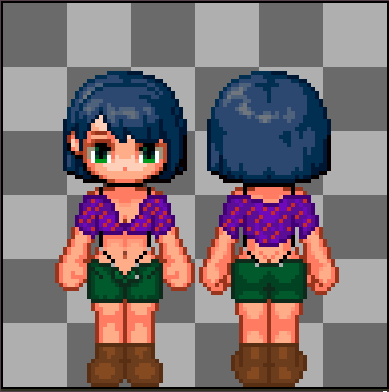 Second draft with full sprite sheet. I changed her hair and the colors in her top to match a more earthy palette. 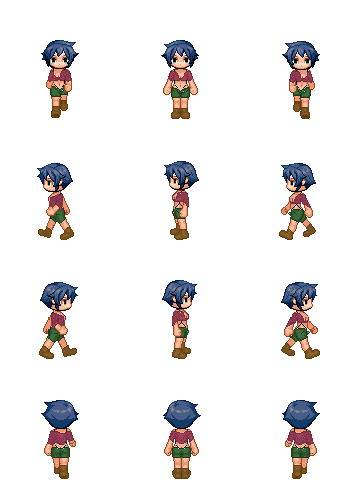 close up of color changes

The only real criticisms I have are with the shirt. First, the color at a glance looks a bit too saturated compared to the rest of the sprite’s color. Also, the secondary color that’s used to give it more depth looks too similar to the shirt’s base color (in other words, it looks like there was only one shade of purple used). Finally, although it might not be an issue, the shirt on the back is longer than it is on the front (only an issue if that wasn’t intended).

Thanks for the feedback!

I actually just started on a less saturated shirt a couple hours ago, so problem solved there, ha ha! I’ll make sure my new draft doesn’t have a secondary color issues. The shirt is actually intentional. Maybe I need to clean it up a little.