Looking for help/sprites for a RMMV game

To be honest, this could go here or on another game dev site, because it involves both WG and non-WG resources, and the game itself is going to (if I can retain enough motivation to actually finish it) be relatively more mainstream but with some stuff to appeal to this community…

Basically, I just picked up RPG Maker MV the other day (have been using RPG Maker software since the PSX version, played at least a little with every version from 98 to VX Ace, and now MV), and have been noodling with an idea for a game. The general concept, if you’re curious, is centered around a microcosm of the multiverse, a gathering of worlds that become linked due to experimentation at a facility on the world you start off on (specifically a modern-esque world with some superscience stuff being done).

There’s this spriter who made a variety of base sprites for RMMV, who goes by the name WhtDragon. He made some diversity (age, race, and body shape) sprites, from recolors of something similar to the default sprite, to teen and toddler sprites, to fat (more like kinda chubby, really, when you consider that in the SD art style of the default sprites, everyone looks a little fat) sprites. What that leaves me with in that regard, unfortunately, is a)default-like stuff, and b)bald dudes and girls in black underwear.

My simplest request is for someone with some pixel art skill to help me get some clothes, accessories, and hairs for the base sprites, so I can use them in the character generator. I don’t know how to get the game to use (or to actually look right for) taller sprites, so default-like is going to have to do, but I can’t do with not having clothes for them (hair is fine, they use the default head so the hairs that ship with the program will work fine, same goes for glasses and face accessories, what I really need other than clothes is body accessories and a shoulders-and-neck for the portrait generator). Since they’re so default-like, and since I’m asking on this community, I’m mostly concerned with the fat sprites (for one, it’s more your style, and for another, default stuff will work for kids and skinny folks).

Also, if anyone has the talent, or knows of an artist who has already done it, I would also be interested in finding some fatter sprites than what WhtDragon has provided. Especially, for the end point of an event I have in mind (and possibly further events in other parts of the game), a sprite or several (or a sprite and parts to add to customize it as needed) whose belly dominates the sprite, like stuffed or just massively fat.

Unfortunately, right now I’m not able to offer compensation for services, so I completely understand if no one is interested, but if that’s the case then I would at least like to be directed to a resource for learning how to do it myself.

Mr_stuffer_rpg_maker from The Currently Unnamed Stuffing RPG Project has a set of default bodies on his discord channel that is free to use. I’ve reposted them here. 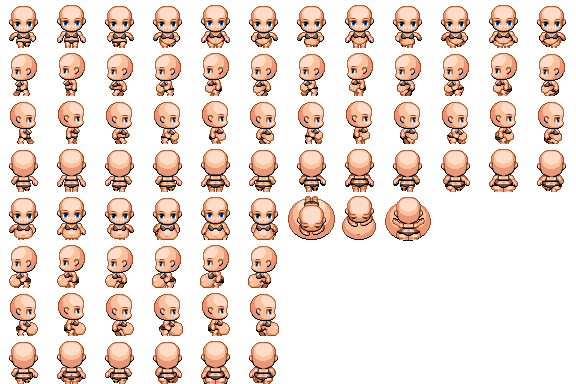 We should really start up the RPG Maker assets thread again…