Hey all, I’ve had different ideas over the past year for a game and it’s only been until very recently that I’ve decided to put these ideas together into one visual novel.

The focus of the game is you start out as a young student who has been accepted into an academy for mercenary and magical training. You are a bright and aspiring scholar in the field of dark magic, motivated to understanding the essence of the universe and how bend it to your will. In your quest for knowledge, you will encounter different students training to be a mercenary, fighter, swordswoman, archer, mage and or healer.

I intend to make six characters that you can date. The more you spend time with them, the more weight they will gain. As such, you can reach a normal end by fatting the six of them evenly or you can get a character-specific end once a certain character is fat enough. Hopefully, the stages of weight gain will be well-paced, gradual and distinguishable. The mercenary gains evenly, the figher is a mix between muscle and belly, the swordswoman is a mix of boob and belly, the archer is boob-centric, the mage is butt-centric and the healer is a mix of belly and butt. Keep in mind that the focus is still weight gain, not body expansion, so each character is capable of being massive by the end of the visual novel.

I’m going to see if I can get started on this project very soon as I already have the TyranoBuilder program and a rough idea of what the story would be like. I will update you on the references for each character as I develop each design.

Ooh, I really like this idea, Ava. This sounds great!

this project has a future

That’s a very good idea, let’s see what you can come up with!

Introducing our first character of the VN, Olivia!

Olivia is amateur mercenary who joined the academy in hopes of being strong enough to protect her family in the event of war. She was born in a fairly affluent noble family, but she tends to downplay her status, believing that she would be in no way different if she was a commoner. Her personality is positive, energetic, boisterous and bubbly. While immensely silly, she takes her responsibilities seriously and loves to give a helping hand. She loves to throw parties and celebrations for others, getting students involved around campus and stopping at nothing to keep those close to her happy. However, desire to get bigger and stronger in order to protect others has caused her to develop a ravenous appetite.

Here is her current character model as of now when you first meet her, in the “Normal” stage. There will be at least eight stages of WG. Normal → Stuffed → Chubby → Plump → Fat → Chunky → Super-Sized → Obese → Massive. As for the portraits themselves, for the time being, I will stick to designing the rest of the characters in the format of pixel art. 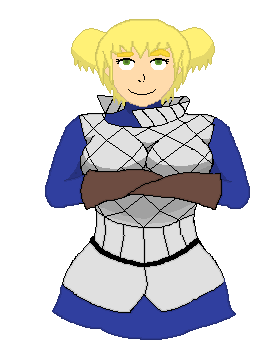 This really looks pretty amazing! Can’t wait to see what the other characters will look like.

this outfit for some reason reminds me of the fire emblem fates mercenary.

Onto the second character of the VN, Ignatia!

Powerful, tough and ambitious, Ignatia aspires to be the strongest warrior in the realm and will stop at nothing to reach that goal. She was born into a local village near the southern reaches of the coast and lived as a commoner during her childhood, taking care of her younger brothers. During that time, she showed an early interest in competitive fighting, learning how to wield an axe with strength and performing tactical maneuvers in mock battles quite proficiently. However, while she is skilled at taking charge and combating immediate threats, she tends to act recklessly without thinking and is poor at planning. While popular among her classmates, her pride can sometimes cause her to easily overlook the personal sensitivities of others. She’s already a bit of a big eater, so with the right diet, she can gain pretty quickly. 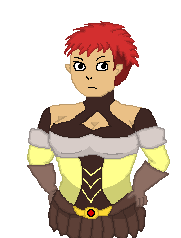 As I continue to work on the models for the six characters, I thought I should update everyone on the progress I’ve made thus far. I have completed four character designs, but I haven’t reached a definite conclusion for the remaining two. Namely, the swordswoman and the mage. But that’s when I came up with an idea.

What kind of personality would you prefer for the swordswoman?

What personality would you prefer for the mage?

EDIT: My vote doesn’t count, I only voted for an option so I could see the poll results.

Forward to the third character of the VN, Catherine!

Born into an aristocratic family, Catherine was endowed with a gorgeous voice and has always wanted to become an actress ever since her family began to host performances and plays when she was a child. She is charming, charismatic and has a passionate flair for the dramatic. (Will update the rest of the bio later, very sleepy) 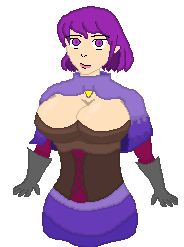