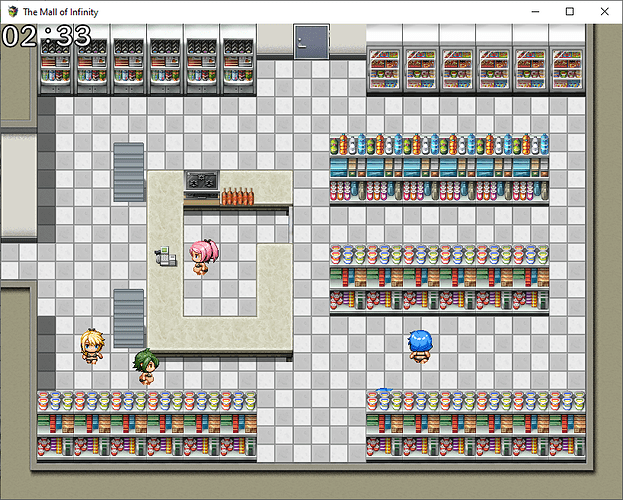 Or, yet another RPGMaker game that features zero RPG combat. Eventually I will make a RPG and it probably will be in unity or something. Now with only 40% of the intended content due to gain jam time limitations!

Play as a Vault, a local creation of the Mall of Infinity, Infinity City’s go-to destination for one-stop shopping of anything, everything. Run a shop (that has no minigames tied to it still), manage the store (that barely has any customization right now), and control your shop and employees alike (which none of this is implemented).

Standard RPGMaker Controls of Z to interact, X for Menu when not in shop. Q/Page Up/Left Bumper for the in-shop menu and functions. 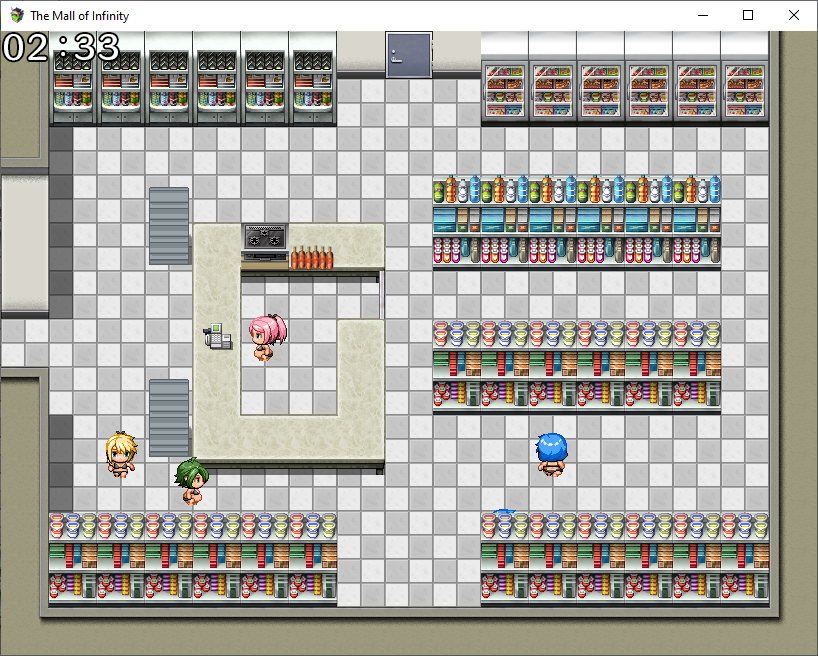 Mall of Infinity by Vagrant Slime

Unzip and run the game.exe. As most RPGMaker stuff goes.

This might get some fixes, but not until after Gain Jam is over, I don’t have time to fill in things until later. And probably Princess Goblin update will be before any fixes to this game.

Well, as it is, the 6 minute shifts feel kinda long and tedious. I was already kinda burnt out on playing after two shifts of watching the NPCs wander around waiting for a shelf to go empty. I think I’d cut the shift time in half, and adjust things like shelf stock and money earned to fit the shorter time. I’m pretty interested in seeing where this game goes, though!

I mirror this, the game feels like it’s dragged out artificially.

I already was pretty unsure on the 6 minute time per shift, yeah. The scale of money and stuff I probably won’t worry on for the gain jam as there’s too little content to even use it on, but the time being as long per shift indeed was something I wasn’t so sure about. The current re-adjustment I have (and not published) is every 3 seconds, it increments by 10 (ala how Stardew handles 7 seconds = 10 minutes), which results in a 3 minute 36 second shift, but this still is probably a value I’ll want to adjust and tweak more in depth, tests with the larger stores demanded more time just to manage it since I didn’t get employee minion work implemented, nor the minigame stuff to make restocking/handling customers less tedious.

Eventually I will make a RPG and it probably will be in unity or something.

If you’re serious, I’d recommend giving Godot a try since it’s completely free and open sourced and, from what I can tell, handles 2D and hud elements much better than Unity.

Yes, I am aware all you need to do is just set every single shelf to one type to min-max favor for that type of customer. Again I’ve not even remotely attempted to balance this game more than just get the game working in the first place.

Just a heads up, it might be wise on the itch.io page to make the latest version more noticeable. Just because it’s very easy to accidentally download the wrong one (which I did and realized after playing for 30 minutes).

With the newest version the time change is WAY better. It feels appropriate in length.
A problem I did run into. The current version doesn’t appear to have any new customers come in for Shifts 2 and 3. Also, it doesn’t look like when you change the food/drink types in the break room it changes it in the actual store.

Regardless, I really like the concept! I look forward to seeing what you end up doing with this game if you continue!

Really liked this concept and I’m looking forward to more.

Yeah I can see the concept and the ambition to it, writing’s strong too. But it is buggy as all get out at times I had two runs “fail” because suddenly customers stopped spawning and I wasn’t sure why. Thought it was due to changing the music for some reason since I changed it on Day 2 and got the first Stop Spawning bug. But the second run I changed the music immediately and the error happened again on Day 3.

But I feel worse than that is that other than rushing out to restock, there isn’t really any gameplay. I didn’t feel the need to change the stock because I didn’t understand the reason I’d need to. I was getting enough customers to meet quota, as long as I was behind the counter at the correct moments. I imagine if you were to continue work on this game you’d fix that up though, so not much else to say there. It was really nice to see that between shifts depending on the personality you chose, you’d get different lines of dialogue to fill out the lore of the weird-ass mall. Really, the ability to see more of what this mall is and represents in the future would make for an interesting game.

I know it’s a bit past game jam, but just gave this game a first try and I absolutely love it! Would love to see you continue working on it. It feels like there’s a lot of potential.