Hello! My name is MaxDigital, and I wanted to share my game you all. It’s a proof of concept for a 2D platformer that I’ve been working on some time now, and it’s available both as a downloadable game and a browser game on itch (though depending on your computer the browser version might not run as well) 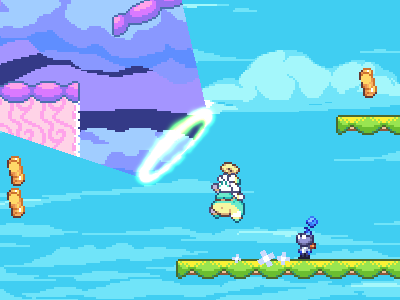 In it, you play as my OC Maya. The main hook of the game (at least when I started making it anyway) is the contrast between controlling a small and agile character vs. a larger more unconventional one. Maya herself is very athletic, able to run around, wall jump and generally just be pretty good at platforming.

By touching a fat fruit though, she’ll gain weight and enter a state where she loses those abilities. She’s no longer able to jump as easily (jumps take a moment to charge up first), and running and wall jumps are out the window as well. In their place, she gains the ability to bounce on her belly instead, and that comes with it’s own unique strengths to balance out the weaknesses that come with controlling a larger and slower character.

There’s a good amount of other stuff to the game as well. By collecting the coins scattered about you can go to a second level, where you find a powerup that allows Maya to glide in her normal state and inflate instead of getting fat. Connecting the two levels is this unique portal effect that I coded entirely on my own, where you can travel from one level to the next through a ring that allows you to see through to the other side. 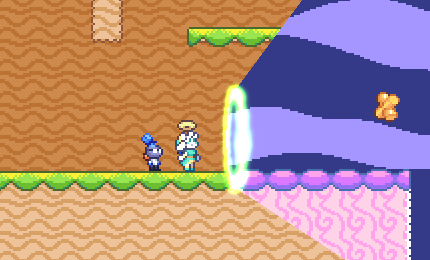 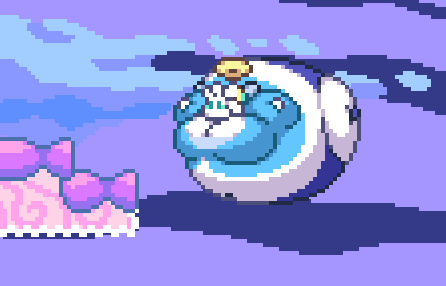 There’s even more to this game beyond that, but I figure the rest I can just leave for people to see for themselves. Even though I’ve put a lot of time and effort into this project, it’s still hard to call it a “finished” game. Still not entirely sure what I’m going to do with it from here if I’m honest, but regardless I hope you guys enjoy playing it! If/When I update it in the future, I’ll try to make sure I update this page as well

I have seen your work before so this maybe a very good porotype.

Man, this has great potential.

This was just a treat to play! The spritework is really cute and the controls are fluid. The second world’s music also put a smile on my face. Never thought the song would fit so well.

This is great! The portal effect is amazing, and I like being able to swap outfits and expansion types, as well as bringing an expansion type from one level into the next one to unlock stuff. I can imagine other levels incorporating different expansion types, and having a bunch of different potential unlocks depending on what expansion type you bring in from another level. Some of the jumps are just a little frustrating in the second level, though, especially the ones that utilize platform momentum to make it.

when the game is finished will you post it on steam or itchi.io?

I really enjoyed it when I played! Maya is an adorable character, and I can’t wait to see what else she’ll be able to do in future updates.

I had a good bit of fun with this! I wish the WG version of maya were a little larger, but the mechanics are pretty solid. Lookin forward to where this project goes in the future.

Probably just itch for now? As cool as a steam release would be, that also sounds just a touch too ambitious still, lol.

I’m glad you guys have been enjoying it though! Really nice to hear about people noticing all the extra details I worked on with this

It is Very Good for prototype because the Sprite was well made but for me I had a bit of trouble with the Wall jumping But side that I love this game.

Oh, that reminds me! The animations for Maya are spectacular and smooth! (I especially love the one for her when she’s chubby and crouches down. -w-)

Heh. Yeah, that one seems to be a fan favorite.

The majority of animations I did myself, but that one specifically was done by a friend of mine

can I get a hint for the cracked floor?

Oh yeah, almost forgot to say
I actually updated the game! If you want, you can view the patch notes here:

Yep, that's right, I'm actually updating this game. It's not a huge update (not much in the way of new content), but I'll list the patch notes here: 1. Added new animations for Maya, including a new l...

I love the new animations!! The game was so cute as it is and now it’s just better. Also it seems like control is a little easier now? so thats nice.

I don’t even know if this is new but I love it very much. (is it supposed to remind me of Celeste’s squash and stretch crouch spamming? because it does, and I love it.)

Heh. Yeah, was sorta aiming to emulate Celeste’s look a bit (and I think my friend specifically referenced that for some animations)

That one specifically isn’t new, if anyone’s curious the new ones are the flip she does when bouncing (before she would just stay on the belly flop pose the whole time), the squash animation when landing from a jump, and the extra frames of turning around while inflated