Good day sires & ladys. I come to show you the prototype of a game that I made in about 1 month; and ask for ideas.

What I have so far:

I want to try and extend this prototype into a complete game, more-or-less. However I feel like I experience a shortage of ideas at the moment. If you have any cool ideas what sort of gameplay mechanics or scenery I should try to add then please tell me in the replies. The best ideas are those that bring most fun for the player while keeping the developer effort to a minimum. 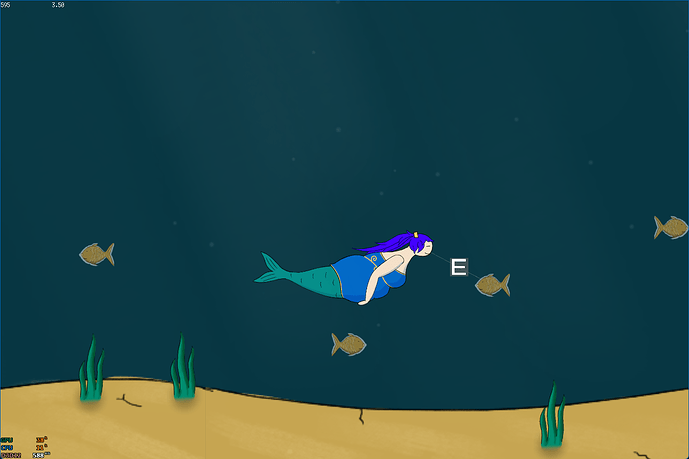 I can’t speak much for the gameplay, but I love the sound effect you have for this. As for gameplay I’m not really sure, maybe you could add some kind of obstacle at the very least, it wouldn’t need to harm the player but at least something to work around.

I have messed around with designing a game like this, I haven’t played yours yet but it looks good

There are many ways of further development of the game:

Also, if you are going to add a life bar, add puffer fish, that damages you, when you eat/touch it (damage is doubled if you’re stuffed, because it’s pointy)

Looks pretty good! It does remind me of Feeding Frenzy, which is a game that I also love!

might be an ambitious idea, but what about a sort of “rain world” style thing?

Right, really sorry for probably being stupid but can anyone tell me how to actually run the game?

It should just be “download the .exe and run it”

If that’s not working, check your antiviruses, create an exception for it.

That’s really strange, I turned off all my antivirus, and when I try to run the .exe, the command prompt opens for a split second and nothing else happens.

Well, try re-downloading, I guess? drk what to tell you.

How am i supposed to sleep in cave?

Good day everyone. Thank you for the feedback & ideas. I will take my time reading through it and thinking about the ideas

It is currently not possible to sleep. The. Only mechanic currently existing is swim around and consume every fish

If the game refuses to start then it likely happens because of compatibility issue of the 2D engine. We will try to debug it when the right time comes

This is a super cute demo!

As for future mechanics, if her hitbox grows as she eats, that could add a bit of a puzzle angle - in order to eat all the fish in an area to get the high score, you have to carefully plan out what order you eat them in, before you get too big to get into certain caves. Being bigger could also make it harder to avoid hazards like mines or sea anemones.

Being bigger could also give you the mass you need to break certain barriers or even defeat enemies, so it wouldn’t have to be all downsides.

Well it’s a good start! I like the general design of mina even if it is a bit simple. Maybe shorten her neck a little, and consider adding animations to the eating, or at least some more sounds. a gulp and some gurgles would be really nice in my book but I understand why you might not wanna go that detailed. But a big burp and some bubble particles that float up off screen would be fun for just about everyone I think. That and weight gain stages. I can’t really say anything else that someone hasn’t already said, tbh. So you’ve got a strong base to work from, and I look forward to how things progress.

I like the pilot. I feel like I should add that Mina rests to digest her food and get fatter. also add more difficulty in that, like going from eating little fish to eating whole whales

Personally, while this prototype seems a bit rudimentary, at the very least it reminds me of something along the lines of a combination of Feeding Frenzy (eating smaller creatures to become bigger) and Defender (horizontal scrolling).

(The reason why I mentioned them is due to how SquishySofty’s Bakery Bloat Out game takes inspiration from sources like Dig Dug and the arcade Mario Bros. game.)