Practice Render For an Eventual Game

I eventually plan on making a visual novel/simulation game in Ren’py, but it’s a long way off and I’m still learning the basics, but thought you guys might enjoy seeing one of my test renders from this evenings practice.

I’ve named her Erika for now. Far from perfect, but a good start. 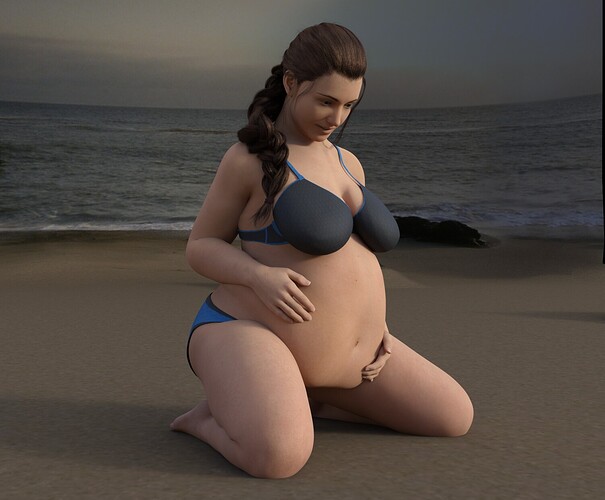 good work on her she looks very nice cant wait to see the game.

Not bad, I look forward to seeing your future in game dev

Kinda curious, what program do you use to make her?

Daz 3D, with some custom morph files that allow for proper fatties!

How long does it take to render something like this in DAZ3D?

How long does it take to render something like this in DAZ3D?

That image took me about 10 minutes to render using a Nvidia 2070 Super. It’s quite a simple image, and not particularly high-res, so didn’t take very long.

I’m still fleshing out the details, but the basic premise is:

You are a first year university student who’s just moved into shared accommodation with a few other flat mates, one of whom is a fit athletic girl who ends up gaining the “freshman 15”, and quite possibly a lot more with your bad influence. Part life sim, part romantic visual novel.

I was very inspired after playing The Weighting Game to try my hand at something similar. Although after doing a couple of renders and trying to get to grips with Ren’py I have so much respect for how much work @tiggertoo puts into his game, I’m not sure mine will be able to match that quality!

tiggertoo’s The Weighting Game is my favorite game on here, so if you are using that as inspiration I’ll definitely be following! I love the mix that you get from a hybrid part life sim, part romantic visual novel (in depth enough to make it feel like you have real say and influence in how things go, not so much that you get bogged down in the details). I’ve always thought the basic premise of that game but in different life situations holds so much potential, as the basic game structure could easily be used for something like college instead of professional life. And that sounds like exactly what you are doing here.

Obviously the hard part is making all of this happen (as you have seen from the extensive but amazing work tigertoo has put in with his game), but I’ll definitely be following here to see where this goes.

nice ,could be a good game where the OP finds her BF cheated w/some gal and she just got depressed and ate her sorrows…OR her BF/hubby likes chubbies/fat wives…so he`s a feedee

@Feed, whether you think you can produce something great or not, I’d say just have a go and see what you can come up with! What have you got to lose? I don’t know if you played the original version of my game, but it was incredibly basic. A couple of bare bones locations, roughly rendered sprites and placeholder backdrops. I seem to remember calling it a pre-alpha alpha. But I got enough encouragement from the community to want to continue and things just kind of spiralled from there

And, if I do write another game, one thing I certainly won’t be doing is anything college related. I’m in the UK and the college/university experience over here is fairly different to the American one. I wouldn’t know a frat house if it slapped me in the face

Thank you for the encouragement, I’m definitely going to give it a go!

Do you have any tips on how you plan out/keep track of the various story routes and events? I was thinking of setting up a flowchart in Visio, but not sure if that’s going to create a lot of unnecessary additional work

I’m from the UK as well, so will probably write it in a UK university setting. Even if that is less exciting than frat houses and pool parties, I think me trying to write it in a cliched US setting would turn out proper cringey

Sorry - I read that you were basing it at a university (that should have given me a clue, when you didn’t say college!) so assumed you were American. The UK college/uni experience seems to be a lot tamer than the American version. Or maybe I’ve just watched too many American films

As for planning stuff out, we all do things in different ways, but to me, a flowchart would be overkill. The more detail you go into and the more rigid the plot, the less you can add things that occur on the spur of the moment. Becca and Lacy in my game, for example, are completely unscripted. I’m making them up as I go along. You need a basic story worked out, of course, which I have for Alice, Hannah and Janet, but that’s all I’ve done. The basics. And if something else occurs to me, it’s (hopefully) not too much work to change things around a bit.

I would have to imagine too that your game will evolve as you build some of it out and you like/dislike various directions your story goes and as you get feedback from people playing early versions of your game. Having some flexibility allows you to do a lot of that. Maybe a part of the game feels repetitive and with little content, so you flesh out a character or bring in a new story line to keep it interesting. Or maybe you create a character who you didn’t really plan to do much with, but people playing your game really love so you decide to build a story for them.

Obviously I’m not the one building this game, so take my words with a grain of salt. But I tend to find that having a rough outline of what you are doing is sufficient and that at some point it is better just to get started making content. Things will tend to evolve from there.

Yeah, feedback can give you some great ideas, if you have the flexibility to include them. Take the waitress (Lacy) in my game. Initially just a background character, then someone suggested ‘wouldn’t it be cool if she got bigger’, and it kind of spiralled from there to the point where she’s now coming properly into the full storyline.

Flexibility also means that if something’s not working, you can pull it without it having too much effect on everything else.

hahaha i foresaw her becoming a part of the storyline

That’s more than I did