Played by mouse, you have one controlling bar to influence how intense the next activity is
there’s only one hidden stat.
I think you guys will figure it out quickly enough.
…
Oh and you can move the camera around with WASD for better or worse.

So heres the idea.
All you get to dictate is how hard life is for this little mouse character
It’s lif is basicly (half) a hamsterwheel which is it’s routine.
and all you have, is a figurative finger on that wheel to say how hard it is to progress for the character.

Borrowed a bit of music from redknight and sounds from https://opengameart.org/
other than that, it’s all meeeeee~!!!

If you gave it a try, thanks for your time and patience. 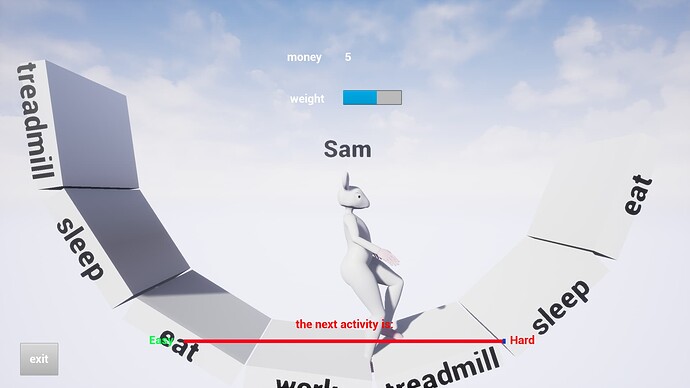 What kind of things are in this? What topics and such?

uuhh. not a whole lot.
i’ve checked the tags but i couldnt find much of relevance in this particular case

What I mean to ask is what fetishes are explored in this.

A screenshot would be nice too.

I left it playing for 30 minutes and there was little to no change with the character in terms of shape or size, the difficulty bar also seems to add nothing as well, I’m just not sure what this game is really.

well, you have one slider bar that controls the upcoming activities intensity.
aaaand thats about it.
Putting it on hard for sleep will not give you a lot of energy
putting it hard on the treadmill panel will make you lose a lof of weight ect.
you always eat most of your money away, and the more money the character has the more it can eat can eat.
the more you can eat, the heavier the character gets.

Character doesn’t get too big even at max, but the game is very simple. Choosing things to be hard or easy changes how much something gives or takes.

Working has no impact on weight, but it being hard gives you more money which determines how much you eat.

I can’t say much without including a spoiler, but just make sure you’re moving the slider to the side you want it at before the activity, it’s position during an activity doesn’t matter, the position it was in when it began is what matters.

It was an interesting idea. It fit the theme, and the music complemented the pace well.

thanks for the feedback y’all!
Unfortunately i’ll be back working on Mark of the Feast now that i did what i came here to do.
So consider this my submission.

ohno… ononononono
oooooooohnooooooo
i promise i’ll do better next time.
i can make up all kinds of reasons
but an apology is all you get.

A tutorial screen would really help the game if you are able to implement it by the deadline.

oohh! good point!
but with the deadline being pushed forward and all the stuff i had to leave out from the original idea i wouldnt even know where to begin to start without starting over.
It’ll certainly be included in the next game.

I actually see some potential in this mini-game, despite me being terrible at it. A tutorial screen would help, and the background did not make any sense. There are other things that I can see making this game more dynamic.

I was barely able to get the bar even to a third of the way full, so I do not know if there was a “You Win!” announcement if you reached the max weight. In either case (win or lose), the end animation would be the rat collapsing. For giggles, the successful end would include the rat rolling forward off the wheel, landing with a jiggling thud. The final score would be the outcome and the time it took to win (or how long you lasted if you lost). Being able to name the rat would facilitate the creation of a high scores page.

Overall, I think the concept of this game is very innovative, and I would love to see it expanded upon.

This is cute, and I really like the game once I figured it out! My only complaint would be that the rat kind of just gets a little pudgy by the end, barely even fat, but even then that was either a preference or based on the effort you could put in, so it’s a non issue. Good job!

ey thanks for the constructive feedback!

good to know! I’ll aim for fatter characters in the future.