No, don’t get too excited, this is mainly bug fixing:

As usual the game can be downloaded from here, where you will find install instructions, a brief guide, troubleshooting instructions and notes on debug mode.

Saves from previous versions are not guaranteed to load correctly in this one. Please start a new game.

when I extract to folder I open gamefx2 folder and there is lib, gamefx2.zip, and gamefx2controls.crc there is no excecutable jarva file to launch it

Same thing happened to me, I used the command prompt method to launch it instead

when I extract to folder I open gamefx2 folder and there is lib, gamefx2.zip, and gamefx2controls.crc there is no excecutable jarva file to launch it

The correct set of files under GameFx2 is a lib directory, GameFx2.jar, and GameFx2Controls.src.zip. The jar file is the one that can be “executed” although it isn’t an executable in it’s own right; it should be associated with the java executable by your file explorer: 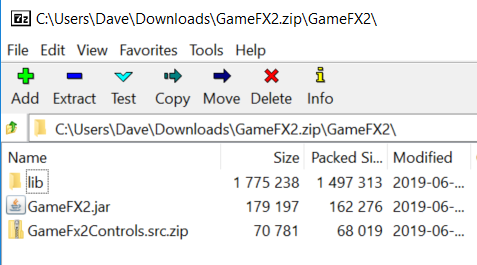 Any .jar file is actually an archive, and can be opened with the usual suspects. It sounds like on your system the .jar file extension has been associated with your unarchiving tool, which is wrong. Use “Open With…”, choose the Java application, and click on “Always open with this application”.

I found another solution. I converted gamefx2.zip into gamefx2.jar with Convert ZIP to JAR - Online File Converter - DocsPal

You could have just renamed it; there’s no difference in the structure of a .jar and .zip.
May I ask what did you use to unpack the downloaded .zip and what OS you are using?

I think you need to change display settings for Windows Explorer (if you’re using a Windows OS) and tick the box that says to display file name extensions, or something like that.