Welcome to your new job as a replacement security guard at the Robot Vixens filming studio, a place where not much is left to the imagination.
As it is your first day you should familiarize yourself with the general environment, the animatronics tend to be somewhat “restless” during the night. But nothing to worry about.

I wanted to make a FNAF fangame with fat furs and others things.

It is a small RPG, with few areas to explore and 3 different mini-games in 3 arcades and a single ending.

If you want to know more information you can consult the text file. 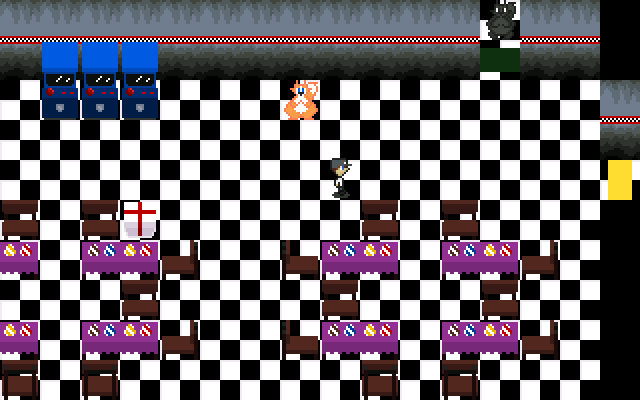 I hope someone manages to decipher the story…

Only played it for about ten minutes, but I had a couple issues. The pure white and pure black checkerboard as the floor is a bit hard on the eyes, you should probably tone that down a bit and use grays instead. Waiting like 8 seconds in between each attack is tedious. Instantly dying in the hole room and having to restart completely because no checkpoints was kind of a bummer and I didn’t really want to play through to get back to where I was.

If you could add some screenshots - nothing like, spoilery, just to show off the game a little.

how do i put pictures?

the save button is located in the options menu with esc

Just take a screenshot and click upload, I believe. Or copy-paste from the screenshot directly.

True, but my complaint was more towards the inclusion of an unmarked instant death pit room in an rpg. The checkpoint would be more of a quality of life thing, since you can die from your finger slipping, or straight up not knowing they’re instant death. Honestly I thought the holes would just stop you from walking or drop you into a lower floor since that’s what they do in every other rpg I’ve played.

Is more a toxic oil blob

I’m assuming the mouse is the resident “trash mob” since they pop up the most. I’d suggest either have the mouse drop more money so I can buy a mini potion each time I barely manage to beat them with single digit health, or give the mouse less health.

As it stands, I’m left with 3-4 health from full after the fight with only enough money for half a potion.

I guess you mean the final boss, I hope… if you find the bomb in the forest minigame it will be the easiest, of course, leveling up a bit.

Thanks for the feedback, personally while testing it I always avoided fighting Mandy until she leveled up enough to kill her in 2 hits.
Even so thanks.

The mouse just has too high a defense to reasonably fight from the beginning; she also has a move that make you run away, leaving you out whatever health and items you lost and used during the fight with nothing to show for it. That kept being the only way my fights with the mouse ended.

The strat is to only fight the cow until you have enough money to buy a hammer; the level-ups on the way will keep your health topped off, and after that point, of the random encounters, only the cat’s high damage will be a threat, but you can still fight her if you go in with enough health/potions. Grind at your leisure until you get the armor, find the bomb, and finish the rest of the game with relative ease.