Here you can ask any questions you have about making a Weight Gain themed game in RPG Makers! (Be sure and specify what version you are using.)

If you want to show off your skills, you may also post tutorials to show other people how to do a certain thing.

[quote=“chillmistressfreia, post:6, topic:1067”]And we’ve officially hit the point where I’m lost! Even before we get to the scripting, I don’t know what it means by “star sprites”.

I have a lot to learn before I actually make anything, the demo I made just has the basics in it, for the sake of my learning.[/quote]

A ‘Star Tile’ is a specifically marked tile in RPG Maker VX Ace. It lets characters and the player walk behind the tile, instead of in front of it. It is useful for making tree-tops and light post, or a bridge the player could walk under.

The default tilesets has a few tiles already marked as ‘Star’. Here is what they look like in the editor: 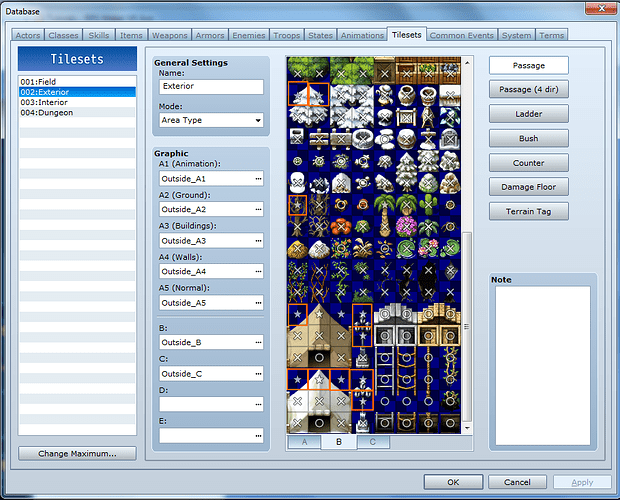 I think I’m gonna ask another question, just because I can’t get a satisfying answer through searching the internet.

If I want to make a very large sprite as an event, and display the whole thing at once, how would I go about that?

The $ flag on a file name only makes RPG Maker VX Ace use each approximate 1/3x1/4 of the file at a time, animating it like a character when it moves.

[quote=“chillmistressfreia, post:3, topic:1071”]If I want to make a very large sprite as an event, and display the whole thing at once, how would I go about that?

The $ flag on a file name only makes RPG Maker VX Ace use each approximate 1/3x1/4 of the file at a time, animating it like a character when it moves.[/quote]

The way we make large events that don’t move, like doors, or ‘$BigMonster1’s is by placing our image in 1/12th the space of a sprite sheet. 3 across, 4 down. You then place an event, and in the event editor window, select the image in your sprite sheet. In the little ‘Graphics’ pane it should show your sprite. Then in the Options pane (directly below the Graphics) you must uncheck ‘Walking Animation’ and check "Direction Fix’ so the sprite cannot move.

This is a big waste of sprite sheet space, but you can put multiple big sprites on the same sheet and reuse those. Take a look how $BigMonster1 and $BigMonster2 are laid out.

A: If running Game.exe doesn’t work, you can open the ‘www’ folder and run the ‘index.html’ file in your favorite web browser. The games work with touch / mouse controls just fine, in case your refrigerator doesn’t have a keyboard.

How do I make bigger characters in the Lite version of RPG Maker?

How do I make bigger characters in the Lite version of RPG Maker?

The same way you do in the full version of RPG Maker VX Ace. Select ‘Tools’ > ‘Resource Manager…’ and ‘Import…’ stuff into ‘Graphics/Characters’

It will need some tinkering on your end, but I think you can have the battle skill that causes the transformation call a common event and check for a status on the affected character. With the common event, you should be able to de-equip or destroy the equipment that the target of the skill has.

Why did the Lite version of RPG Maker disappear from the RPG Maker website?

Why did the Lite version of RPG Maker disappear from the RPG Maker website?

I think they were worried about people pirating it and removing the Lite restrictions. RPG Maker VX Ace Lite is still available from Steam.

If you can’t use Steam for whatever reason, here’s an older version hosted on download.cnet.

thats can be useful to make my rpg

I don’t know if this is the right place to ask but I’ll try anyway ! I’m trying to use Rpg maker mz and i want to know : how can I use the tall (and fat) sprites ?

And also can I use the generator ?

Sorry if it’s a dumb question I’m new to this.

For more info I’m trying to use these sprites : 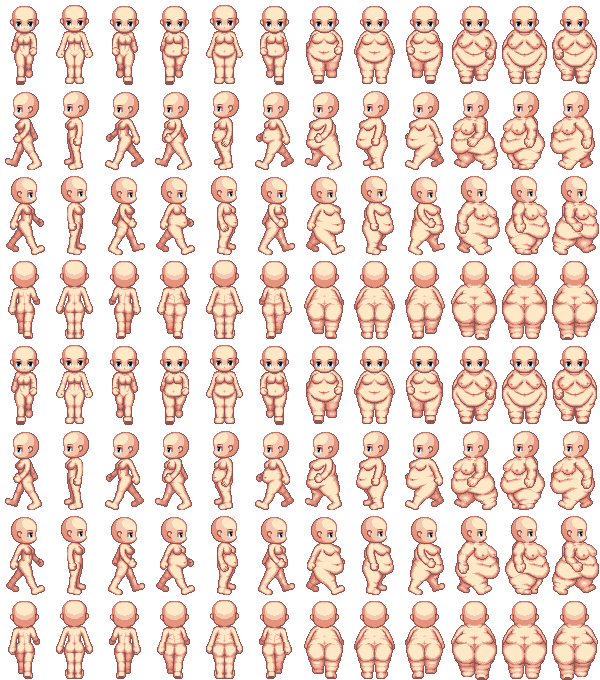 I don’t know about MZ, but in RPG Maker MV you just put that template in as is and it automatically divides the file into 8 (4x2) character sprite sheets based on the total height and width of the file. If you want to make a single character sheet (used for abnormally sized characters), you put a $ in front of the file name (in this case, $tm2v2_template.png) and file will make it a single character sheet divided into 3 down, left, right and up facing sprites evenly divided based on the file height and width.

Again, without knowing the differences, it might not work with MZ.

Now for the second question, is there maybe a way to add hair/clothes to the tall characters or do I need to do that manually (as to modify pixel by pixel) ?

Because I don’t really want to leave them naked and bald xD.

Because I usually have to make and edit the clothes myself, I usually just make the character with the built in RPGMaker character creator so I can then cut off the heads and paste them on top of the bodies (I’d recommend an art software with a layering function like Paint.net Paint.NET - Download).

But there is a third party extended generator that, with modifications, can be made to accept those templates which will let you easily change the hair and skin/eye color, but you will still probably need to make your own clothes assets for obvious reasons: Schlangan's castle

So, there’s this Steam program called Universal Character Generator, that you can easily use to
add parts to build characters with several layers (for clothes, etc.). Problem is, you need to make all your assets yourself.

However, luckily for you, even if you don’t want to use that program, I do have plenty of clothing assets at different weight levels.

One of them is for my “short” height characters, but it’s a dress, so it can be adjusted.
The other’s more similar to the standard one you posted. Let me know if you need any more assets, since they’re just sitting around in my stuff since I mainly translate games these days.