so had a dumb thought. how about a shmup weight gain game? a couple of key notes

-the ship is esentially a girl with a kancolle/azur lane style flight rig, with a side view so you can see more of her, example
-the rig itself is the hitbox, not the girl, so less worry about the weight gain messing up dodging bullets
-instead of one hit death, you would have an energy bar, with a special chimera beast style projectile that would fill it if you hit an enemy with it. every three units of energy would cause the girl to increase in size
-a shop for various things. use points to buy different weapon types(ripple, laser, missile, ect), increase energy capacity(more weight), and maybe some different color pallets for the girl
-the shop could have a girl as a cashier, who steadily increases in weight the more you buy, till her belly is propped up on the counter

and that’s about it. i do have a couple more ideas about some stuff, but idk about putting effort into writing out something that just gets glossed over

I love your idea! So much that I made some funny mock-up images lol
Here is my slightly altered proposal of how the game can be implemented.

Firstly, let’s use spaceships + space as the game’s setting since there is more freedom to design the ships and enemies.

Secondly, rather than limiting each girl to 1 ship, I think it’s more flexible to say that each girl character is the AI chosen for the ship. Each girl has her own pros and cons (such as accuracy or speed), and each ship also has its own pros and cons. This allows the player to pick the girl they want with the ship they want.

Attaching the ship to the girl it will make it hard to admire the girl during gameplay since she has to rapidly move around to dodge bullets. I suggest placing the ship in front of the girl. The ship moves without the girl moving. Enemies killed will sometimes drop supply caches, when the supply cache is close to the ship, it gets picked up by a tractor beam and dragged towards the girl’s mouth, and disappears into her belly (indicating the goods being stored in the ship’s cargo bay). The girl’s belly gets bigger and the ship suffers from a speed debuff when carrying stuff. The girl will indicate how damaged the ship is (torn clothing) and how full the cargo bay is (belly size). After the stage is over, the collected goods will be tallied as experience, and with enough experience, the girl level up in fatness and obtain more mount points, and the ship will look cooler and bigger.

The player can select the girl and the ship, then they select the loadout by placing weapons/utility tools/armor on each mounting point on the girl 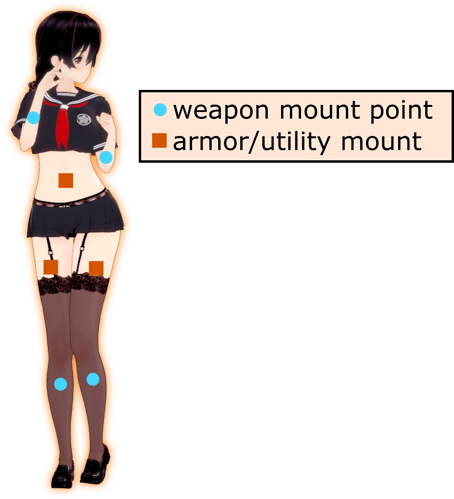 (the spaceship sprites are taken from here)

honestly, that’s a pretty great idea. kind of goes sideways of what i was thinking, but still that’d totally work as it’s own thing

sorry about that, you don’t mind if I go ahead with this idea?

go right ahead, you’ve clearly put some actual effort into it from the screenshots alone