Are there any gameplay series/videos for Skyrim WG mods? You know, modded playthroughs with female character WG instead of just showcases of the mods themselves.

TLDR for the second point, a WG mod that uses the default character models, not those stupid sexualised or “bEaUtIfIcAtIoN” (Spoilers, these also look worse than the default female models) mod ones.

I do for SSE, Weight morphs plus devourment "you dont need to use devourment but it comes with script edits for weight morphs to allow for the coldsteej sliders. 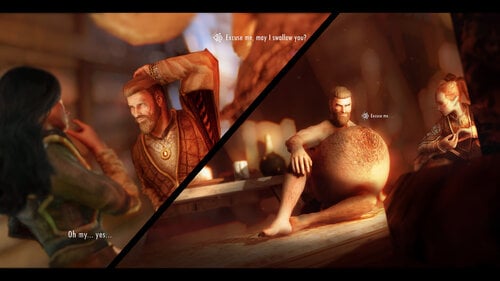 Devourment is an entire lineage of vore mods. Devourment Refactor is my attempt to make a version of Devourment that is stable, maintainable, and extensible. WAYS TO CONTRIBUTE Bug testing is always helpful. SKSE: there are several SKSE functions we... This mod makes it possible to gain and lose weight using the body morphs mods like CBBE SE come with.

download Coldsteelj Bodyslide files they only work for SSE.

other option is the mod called “corruption” it has one feederism addiction that causes weightgain, other features can be disabled.

Corruption View File An extensive addiction and transformation mod. Implementing everything from alcoholism to tentacle addiction, and causing plenty of mischief from those addictions. Overview: Corruption is a catch-all mod for addictions,...

besides those you are out of luck i am afraid.

only other thing i can suggest for your body is to look for a vanilla bodyslide conversion.

Yeah CBBE and Bodyslide are the bread and butter of body mods for Skyrim, so if you don’t like those your options are pretty limited. You can find nude body replacers that put the characters in underwear as well as vanilla clothing CBBE conversations that keep armor and equipment looking just like vanilla. If you really snoop around you may find a mod that doesn’t require CBBE, but people have been working with that body base for a literal decade at this point so it’s most likely going to be the most refined mod out there

the new version of cbbe 3ba has belly fat sliders