Okay so I’m pretty new to this website as I only discovered it recently. But I do have a concept for a game I quite like, it’ll have multiple endings and changeable settings so the game works as the player likes. The general idea is there’s a guy on his sofa, and you get to stuff him full of different foods, different combinations of food result in different endings. Different settings can allow for different endings. Only problem is, I have zero art skills, even the concept art was made in about an hour with way too many traced references, and I doubt I’d be able to keep it consistent anyways. On top of that, I don’t have the money to pay someone, so this idea will probably just remain a concept until I can better my art skills. 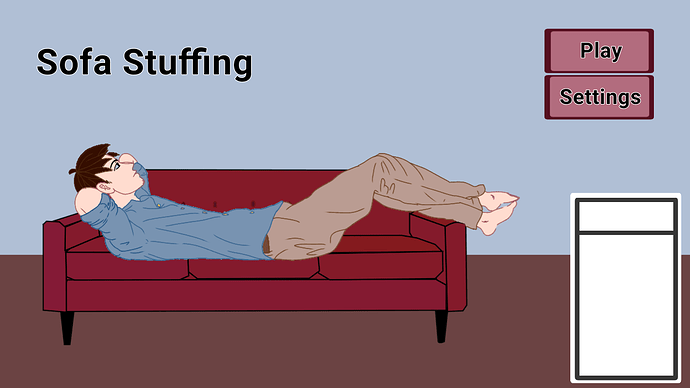 if all else fails, make a circle where’s his stomach is and expand the circle for expansion.

I’ve seen it done before loads of times in flash animations, better than nothing at least.

To be honest I’ll probably end up doing that then update it later when my art skills get better, thanks for the tip!

i’l help you, i cant gurantee the best but il still help

Please if someone start with it make girl version too.

Thank you so much! Do you have any way for me to contact you?

Okay I am excited to see this. It is so rare to see something with male bellies. I really hope to see the finished article.

Thanks! I’d love to be able to make it but since my art skills aren’t the best I’ll probably end up making a very tacky looking game. The visuals wouldn’t be the best.