!This is NOT My game, I was given permission by the creator (Evosoul)!

SoulStream Expansive Chapter 2 is a sequel to the original SSE (found here) You play as Luca and must traverse
the world of expanding ladys! to discover what is making them so big! Unlike the first
game this one will be made in the unity engine VASTLY Improving its quality. and
while there is no direct weight gain in either the first or its upcoming sequel it has
many weight gain adjascent fetishes that im sure you will enjoy! 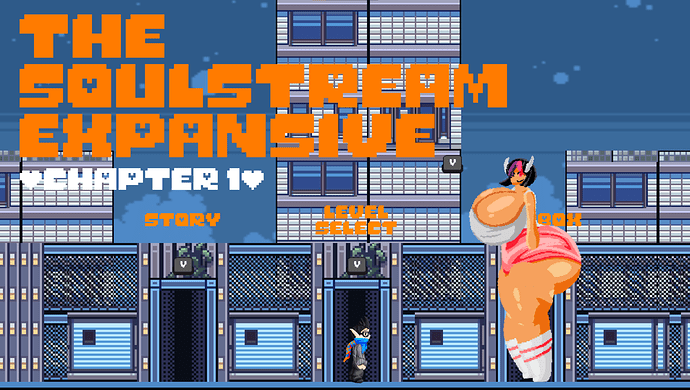 No, Chapter 1.5 has been released, but chapter 2 has not been released yet. Also the creator’s name is Evosoul, Luca is the name of the main character in the games he makes

ya chapter 1.5 is technically the demo for chapter 2

Thank u for the corrections!

A little update for everyone since the itchio doesn’t seem to get updated these days;

Evosoul is now posting early access demo builds for Soulsream Expansive on his patreon page. The $10 pledge is what gets you it i think. About 20-30 minutes of gameplay and contains about 2 growth scenes and interactive fairy mobs you can expand. There’s also a discord for the game but I’m not sure what the site rules are on sharing servers so I’ll hold out on that for now.

Personally I’m not sure where this game stands site wise. Having played the first chapter, 1.5 and now the patreon builds for 2 there’s not much when it comes to belly stuff. There’s maybe one scene in chapter 1 but I’m sure that was a patreon commission.

From what I’ve seen it’s mostly hourglass, breast and butt inflation with a bit of gas (can be toggled) so if that tickles your fancy then I’d give it a try if you have the pocket change. There’s a playable demo of chapter 1 linked in the OP but from what it seems like both chapter 1 and 2 when fully released are going to be paid releases. Unsure on pricing.

Patreon is empowering a new generation of creators. Support and engage with artists and creators as they live out their passions!