Hey, remember me? Probably not, but that isn’t important. What IS important is that i’m attempting to solo-dev a game to practice my skills in basic programming and art. It is planned to by a hybrid visual novel known as Space Diner XL, the basic premise of the game is you run the galactic equivalent of a fast food truck (a fully mobile spaceship acting as a restaraunt) and you gotta serve customers to keep the ship afloat and your business stable. As you go along your career, you’ll meet returning customers and get roped into their story if you please them enough, and who knows, you may even develop a romantic interest with them? Thus, multiple endings are planned depending on how well you run the restaurant and how well your dates go.

And of course, I wouldn’t be posting it here if there were no fetish-related content. Yes there will be. Constantly returning customers to a space fast-food joint. You can do the math from there, right?

The game is incredibly early in development, it is currently being made in Gamemaker 2, one character is mostly fleshed out with more planned, and one entire half of how gameplay will work is still being planned. I am open to ideas, so please throw them at me! It can be gameplay ideas, story ideas, questions, etc, i’m open to anything!

So far, the only thing internally I am able to share with you right now is this warning splash screen that i’m quite proud of.

I have to wonder will this be a timed game aka max days or will it be one you can take your time?
also will there be a money system? both for food items and upgrades?

I intend the game to be very lax and low on challenge, there is no timer and the only ones you have to worry about are the challenges present in character stories and keeping the restaurant up. An upgrade system is being planned as well, using the income the player gains from making food for customers towards said upgrades and perks.

Looking forward to it, sounds fun!

Here’s a tease at one of your loyal customers, or should i say royal customer. Her name is Queen Vesporia, a newly crowned queen of her people taking after the unexpected death of her mother. 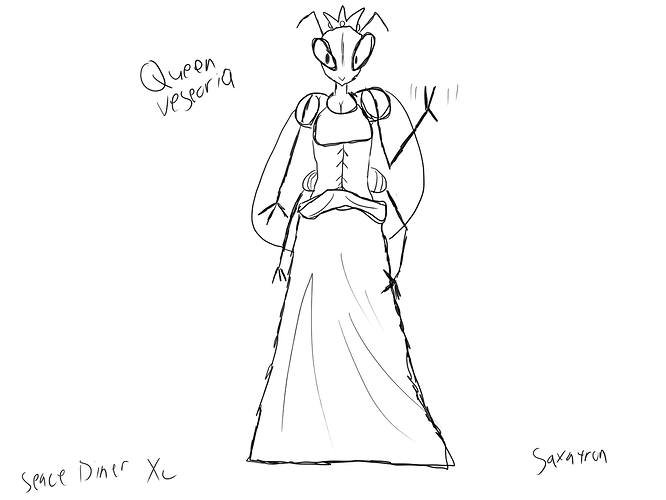 A queen hailing from a race of wasp-like people known for causing an entire galaxy to give in to their rule.

Vesporia is fairly new at her job, taking after the death of the previous queen. Shy, naive, a bit of a short temper, and longing for a more peaceful life rather than being feared, Vesporia seeks solace in the little restaurant, with her guardian drones being a minor annoyance.

A royal requisite, she states, is size. So she has been touring restaurants to see if it’s worthy of official endorsement and her appetite. Could it be yours?

oh she’s pretty cute. I can’t wait to see how she fills out.

hmmm your hinting at a romance would that be a one on one kind of thing or more open
also I would say having a fair number of Unique customers would be good I would also say there should be a fair bit of background npcs. going off of Vesporia after getting some where with her you could start seeing others of her race.

For now it’s planned to be a one-on-one romance but so far, the door is open for a polyamorous relationship, all depends on whether or not I can program something like that.

Side characters (and secret characters) are also planned.

As of now, Gamemaker engine is not final. I am currently testing out Unity as well. I have also made the first character sprite and I can’t wait to show you her, however, I will space out character reveals a bit. I don’t want to give everything away too soon.

I am also still open for ideas from other people. If you have something like a character idea or a gameplay mechanic, throw it at me and i’ll see about putting it in, and credit’s due where credit’s due, i’ll make sure you get proper credit in the game.

For now, I take a short break as I put my head into work for the next couple of days.

I’ll hold off on ideas until you get more of it done, I don’t want to overwhelm you right out of the gate. Definitely excited to see what you come up with.

hmm how customized is the PC? like can we pick gender or race? any details or is it going to be more The player themselves are the PC?

Race / Gender selection is planned, probably won’t be implemented in a demo release though.

Taking a short break from programming to developing character sprites, for testing purposes I have fully made one unannounced character with the rest to come. Still debating on using Gamemaker or Unity but so far i’ve made baby steps with both engines.

In the meantime, would anyone mind / care if I started a patreon at some point? As much as I like working on the game, I kind of don’t want to fall flat and forget about it one day, support is kind of a motivation. What do you guys think?

So while programming and other things gets sorted, allow me to tide you over with one of the more completed characters for the game. 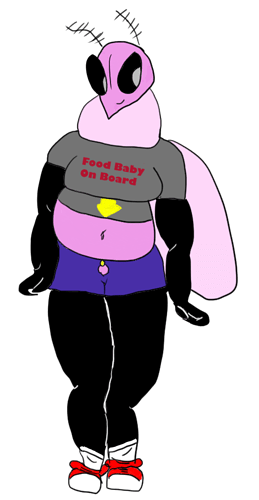 Meet Sofia, aka Soffie! One of your more enthused customers, Soffie hails from a race of moth-like people and carries a gluttonous appetite for anything edible. Soffie claims she was a big eater since she was a larva, which is unsurprising considering her people’s larval forms are known to be gluttonous, but very rarely does that trait carry over to adulthood. Soffie is looking for the one true restaurant to call home and perhaps find a potential romance in the process.

Soffie, currently, is my guinea pig for testing features. So far she has three sprites in three states to test visual novel aspects of the game, and perhaps gameplay mechanics too. For those who want more than bug girls, don’t worry, Soffie and Vesporia are so far the only characters falling into that category, more species of “babe-liens” are under planning.

Hey guys, I haven’t worked on the game much since the last post since I ended up being really sick the past weekend, but it hasn’t stopped me from brainstorming, and I think i’ve finally figured out what the other half of the game will be, and I think i’m settling on a basic platformer with dungeon-esque elements.

A restaurant is not complete without ingredients, and your ingredients only come from the most exotic areas on several remote planets. Exotic, albeit dangerous planets. You’ll need to keep yourself stocked consistently, but don’t go too far into these planets unprepared. Furthermore, the lustrous frequent customers have preferences, and some can only be made with ingredients that are harder to get.

On a side note, i’m considering making the “returning customers” potential allies on these “ingredient missions” if you do certain conditions, with their own unique abilities that can open up new paths and secrets. However, you can only have so many allies at a time, so while more areas open up, some will be blocked off to encourage replayability towards different endings and experimenting with new mechanics.

Looking through this, it sounds pretty great.

Firm maybe. My preference is female but the door is open to a male character if I ever get ideas for one.

Is this still being developed?