Like the title says. The game itself will be about you managing the prison and it’s inmates. I have a few character ideas already but could use some help coming up with ideas for a few more. A few things about mechanics you should know are that there will be upgrades you can purchase for parts of the prison, and you will be able to talk to the prisoners. I am assuming that weight gain will come from upgrading certain parts of the prison but that doesn’t have to be the case with all characters.

Could you expand a little bit on the context of the setting? It’ll be easier to provide ideas for scenes if we know more.

Here are some answers.

It would be a modern setting where the inmates most likely wouldn’t expect it. Weight gain in IRL female prisons is super common so maybe guards would be aware of it.

I am planning on you being the warden but the warden is more of a self insert than a character. I don’t want the warden to have motives that aren’t yours if that makes sense.

I will likely have a somewhat arbitrary ending date. I want to make it so that you can’t make all the characters reach their max weights in one playthrough so there is more replayability to the game.

I would describe it as a kind of hybrid between VN and Management sim. The point of the management systems in the game will be to impact characters in different ways so you can later see how they change.

Tonally, it is kind of hard to describe. There are aspects to it that are definitely dark but hopefully not too dark. To give you an idea of my planned tone, when one character gains weight, it lowers her self esteem and she becomes more of a bully to other girls. As this progresses, she gets more violent with them and maybe a character gets hospitalized. This means that that character wouldn’t gain weight during hospitalization and you would lose out on money for upgrading the prison because the prison has to pay her medical bills. This is pretty dark but in a prison setting I feel it is possible to go darker than that. I am also open to ideas that are lighter than that but that gives you a ballpark of where I want the project to be tonally. I plan on most characters not wanting to gain weight or being ambivalent to it.

With weight caps, I wouldn’t go over 350 I guess? The cap might be smaller than that because I don’t want to have to draw the inmates at so many different sizes. Maybe the cap will be different for each character. Sorry for the non-answer!

With sex stuff, I wouldn’t want to do anything hardcore and no sex scenes. If sexual content happens, it would be referenced by characters but not shown.

I haven’t played prison architect but from what I saw I want it to be more of a VN than prison architect with the management aspect of the game being smaller than it is there. Also there likely wouldn’t be more than say 8 prisoners and 2 guards you can talk to. From what I can see, tonally it would be similiar but with the more crazy aspects of the game toned down a little.

I’m honestly not that well versed on prison culture/media, so it was a little harder than I’d think to come up with ideas…

I might come back and give some more scenarios if I can think of 'em! But hopefully this was of some use, and even if you don’t end up using any of it/already had similar things planned, I hope it at least gave you some ideas of your own!

I like these. Some variation of these are likely to end up in the game. Thanks for the ideas!

Update on the project: I have been working on making the UI for the game. Enough of it is complete I felt like it is ready to be shared. Clicking on the names to the right of the paper will fill in the sheet with info about the character you selected and show their current portrait, you can see the icon you click on to enter the build menu, and you can see the advance time button.I still want to add a button to make it so you can go to a prisoner’s cell to talk with them, but after that the UI will be complete and I can work on drawing characters and writing story. 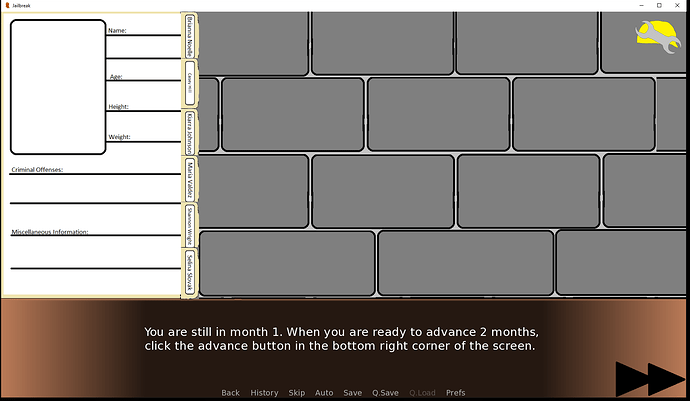 Update: First character is now in the game! The Quarantine is making me really productive. 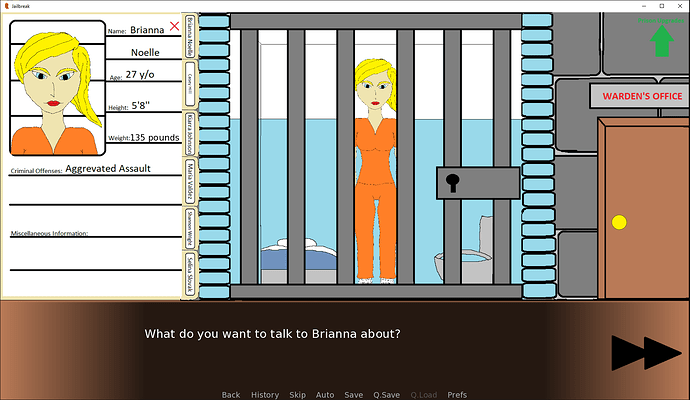 Well, at least the quarantine is useful for something then

I’m glad I’m not the only one using quarantine to work on games!

On a technical note, Brianna there would totally be able to walk through those bars, as they’re wider apart than her head and hips, at least at the start. Maybe have armoured glass like Lecter’s cell in Silence of the Lambs so we can see her better? Also if she’s 5’8" then the warden’s door must be 4’ tall!

I will try to figure out how to make the door longer. Good catch. The bars being like that wasn’t intentional but makes sense because you will have to deal with certain characters escaping from their cells. The bars were originally closer but I moved them farther apart so you could see a bit more of the character. I debated having glass like you said but it just didn’t feel like a prison without the bars.

One other reason I like the bars is that as she gets fatter you start seeing parts of her poke out from behind the bars which I liked a lot. Anyways thanks for the feedback!