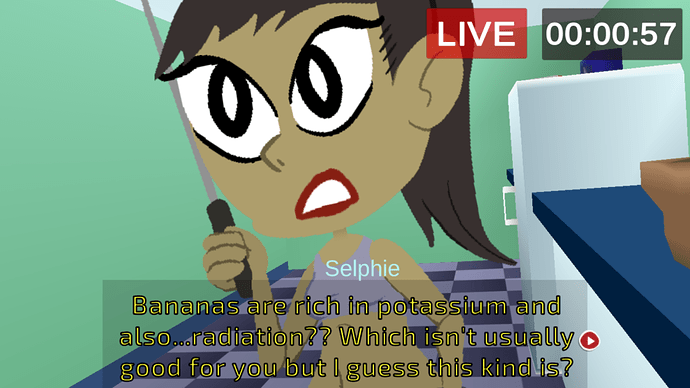 banan1067×600 286 KB
A game in which I returned to my first love, Point and Cick adventure games and learnt a lot of new things about my new problematic but alluring partner Unity.

Join fitness influencer SelphHealth23 as she attempts to conquer the 10k calorie challenge!

Cool beans, let us know when it’s ready for play

It’s playable, you just need to sign into GaneJolt.

I’d say it’s pretty neat so far and I like the writing. I know it’s still being worked on and all so I won’t mention minor quibbles, but I feel as though the camera needs a bit of work, as it seems to be all over the place. Also are you meant to be able to enter selfie mode after entering the password into tht laptop?

Maybe this has changed since last night, but when I played this and ordered the pizza, she said give it to me from the window. I’m assuming that it’s the part of the wall with the note texture on it, but I couldn’t figure out how to get it.

Now it just appears on the floor, so I can progress, although if I go into selfie mode and choose “About Trent” and “Give him a chance to explain himself”, the game doesn’t give me a way to exit selfie mode, essentially softlocking the game.

Hey. Delighted to report that’s one of the many bugs I squashed this evening.

I fucking LOVED this game

The plot was amazing, loved the climax of the story, (won’t spoil anything here!), I loved the model, her expressions, and the movement and the 3d setting it was in, your style of making games has such charm, and there was so much dialogue that I played about 4 or 5 times and I STILL keep seeing new things! This game is awesome and I can’t even imagine how you managed to fit so much in a matter of 2 weeks, this was honestly incredible, (and a lot less scary than last year!!) I’m such a huge fan of your work, please never stop making games!

This was really impressive, especially given the time-frame we were all working with here! It’s a shame this doesn’t have more comments already, so I definitely wanted to drop in and compliment how unique this one was. It really stands out from the other submissions and was a fun take on the “work place” setting. Thanks for making it!

I finally had the chance to play this and I’m glad I did! It’s a really cool little game! It was really interesting with the different little puzzles dotted around and I loved the dialogue. (I think i got the best ending and it was pretty awesome :3) There are only two little things I want to point out. Firstly the post buttons are just a tad hard to click on, it would be a little easier if they were to highlight when they are clickable. Secondly I am pretty sure the restart function is broken unfortunately, upon a restart some finite items like the bannanas were inaccessable for me. Still the game works perfectly on a full restart and is really impressive for such a short dev time! Good luck in the competition!

Another fantastic game you have brought to the world of Weight Gaming! I tip my hat to you.

I have enjoyed playing this game, and I have currently managed to unlock the Feedee ending (which I like to think as the best ending), the options and dialogue is a genuine nice touch which highlights a real life feeling of a streamer interacting with her ahem ‘wonderful’ audience.

The decisions are both plenty to choose from and are hilarious to see the results. I love the attention to detail at how SelphHealth23 comments about her expanding belly as it progresses throughout her 10k calorie challenge. Her interaction with certain object were an excellent touch as well, and how she interacts with the audience with the camera stick (at least that is what I think it is) is very clever.

I have enjoyed your games so far, both on this website and on Gamejolt. I hope to see more of SelphHealth23 in her next stream as a feedee and openly enjoy a much more and desperately needed fatty feast~

how did you unlock the feedee ending?

All you got to do is simply find all of the food and eat it, not waste a single drop of food.

Notice a bug where if you hit “restart game” you can still make Steph naked, and worse it won’t let you eat the bananas!

Thanks for the response, everyone! (and thanks Cake for the boost on stream last night).

A running tally of the bug reports so far:

As for getting 100% of the food, I’ll post a list of everything you need to find here so people can know if their game’s bugged or they just missed something:

All in all, it all seems easy enough to fix! Which is encouraging to hear!

I take theses steps and it doesn’t appear:
eat 2 bananas to see the paper, view the ingredients on the counter, look at the cup, then guess the password.

please let me know if I’m leaving out a step but right now it appears bugged.

(Edit)
Nevermind I was missing a step…and I found it. Great game btw!

Are there more than 5 endings? (GReat game btw, you always outdo yourself)

I designed it to have seven but after watching this playthrough I’m now pretty sure one of them’s not activating :v

I’ll admit the art style put me off at first, but it quickly grew on me like it was an eaerly PS1 game. Loved it. If you’re still working on it, i’d add more dialogue changes depending on what you did before since the game ends up skipping or ignoring things you did.

A fun little point and click game with an interesting premise. The live stream is a very interesting concept with everything the player doing contextualized through interaction with the audience. The point and click controls through where actually quite clunky for the hybrid 3D/2D setup though causing me to get stuck on serval occasions.

Just like your last submission, you really pushed the bar on the presentation of the game itself by making it operate in a 3D environment. This was effectively an escape room game with a weight gain twist on it, and the context of what was going on was amusing. I particularly liked the physics puzzle of getting the item from the top of the refridgerator. The only thing that was a little wonky was the walking animation, but that’s a massive nitpick. Also I could infinitely order the pizza, though it didn’t seem to do anything. Good number of alternative endings, interesting take on the theme, all in all a solid submission. Great work.

Witchcraft. You jumped from like partially 3d to even more partially 3d haha. It’s clever and made me laugh. I only got a couple endings but I’m curious how there would be 5 more. It made me laugh a few times. I can definitely see that this would be a cool framework for something bigger