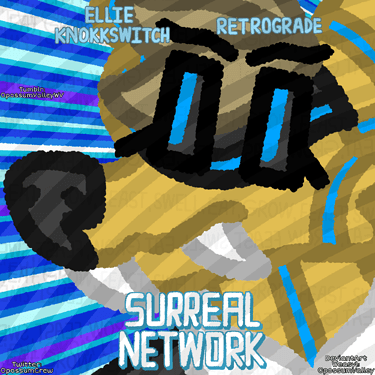 Made my first kink-focused game in general, called SURREAL NETWORK. It focuses on the story of two furry protagonists, Ellie Knokkswitch and Retrograde, who are tasked with exploring a storage device linked to a goddess known as Her Divine.

In this device the two will enter a virtual reality space and venture through nine security routes with simulated experiences. Each simulation (basically each level) will have a small, unique story generated with a problem. These simulations will lead to expansion-related kinky outcomes if you can’t figure the right choice to solve 'em. Once you reach the end of this device and meet the goddess involved in it, you decide which fate the two face back in real life.

Pretty cool, I like the alternate paths for each scenario.

Okay, so after playing this for a bit, i have to say THIS IS PRETTY DAMN GOOD!! Haven’t played anything like this in a long time and feels like some nice stuff, I’m not really into inflation but after playing the first bit which is actually inflation it seems, I have to say I enjoyed it, nice work man, I hope others give this a try!!

After playing through it, I liked it… even though my brain mostly skipped through most of the fetish fail scenes, the concept of having to solve each scenario with a bit of logic was interesting, and not locking you into either ending for each scenario is also a neat mechanic.

This was really nice! I like the reframing of the standard “kinky stuff only happens as a bad end” that I tend to hate in kink games. I’d love to see more from you, maybe more in this world or something new? I also appreciate the inclusion of a wide range of genders, it’s lovely to see diversity in kink content.

One question I did have, is “Human” being used as a blanket term in this game to refer to all denizens of this world? As far as I could tell all the characters in this are anthromorphs, so I was curious about the world!

Love this but also…it’s hard for me not to read Retrograde’s dialogue as Karkat.

Anyway to just manually save like in other twine games? My computer has some glitch where it won’t actually save the game in twine even when it does, or just pops up an error message (In other games) and don’t want to play through the entire thing again just for the sake of enjoying an ending
(Spaceship plum ending is best)