Wow, you’ve matched my record! I’d be surprised if anyone manages 1 day. So, I don’t usually take the edge off these things but I have to respect that. Here’s a new version: Change log: Aimed shots have a recolored sprite to make them distinguishable from random shots Waffles are less aggressive, now going in a nearly vertical arc Coffee cakes fire slower shots Donuts fire 1 frame slower so they don’t sync up and make that awful noise With the deadline about a day out, this will probably b… 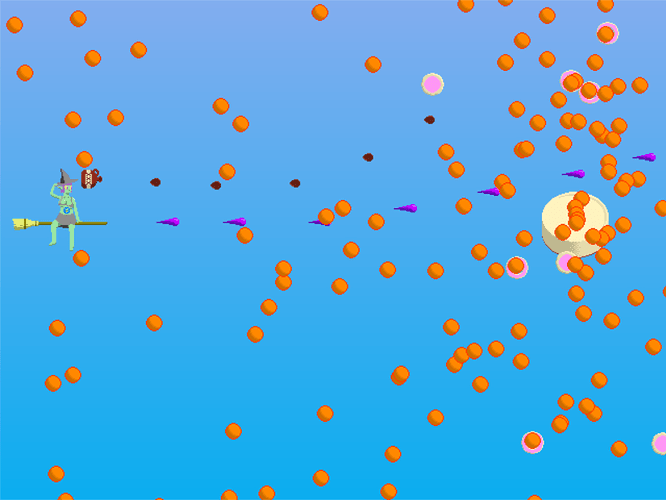 Sweets & Sorcery is an arcade-style shooter where you choose how many enemies to take on in each battle. Don’t bite off more than you can chew!
Includes:

I may or may not update this before the jam ends; I just wanted to put it up as soon as possible in case there’s some outstanding bug or oversight. In terms of production value, this is probably the most ambitious thing I’ve done solo. I’ve been practicing art, so it should be noticeably less tragic than in my previous solo projects, although time constraints have naturally held me back somewhat. It’s also my first time composing music for one of my games (albeit just one track as of this writing).
Please, check it out and leave some feedback. I’d love to see your best scores or favorite strategies.

I’m really enjoying your submission! Keeps me coming back for more as I try to beat my best score! It’s a fun little bullet hell, and the art and the music are pretty nice!

Some thoughts on where I could see improvement:

But I’m not a pro gamer by any means, so those are just my thoughts. Overall, feels like a very solid entry, and I like the wild card incorporation!

Thank you for the feedback!

I’ll probably keep the 7 day cutoff.
You’re right about the donuts usually lingering around for a while, but I had hoped to counterbalance their evasiveness with the fact that they only fire sparsely in random directions. If you have minions, it helps to order them to stay in various spots so you can cover as much ground as possible.
As for the waffles, they are one of the more difficult enemies to show up right off the bat, but considering that they are also worth more weight than the small fry, I encourage going for it. They only fire shots aimed directly at your position, so you can dodge them by staying in motion.

Let me know if your score improves. Of course, shooting games take a lot of practice, so I understand if you feel like you’re hitting a wall. Anyway, it means a lot to me that you like the art and music.

I’m also going to complain about the waffles. They are pretty miserable. The only change I think they need though is firing faster when they get on the screen. Right now they basically fire point blank to anyone in the back 1/3 of the screen so them firing quicker could alleviate that.

Besides that I think every other enemy is pretty fairly balanced and I love the sprite work as she slowly fills the broom. I also like how your trade off speed for firing speed as you get heavier. It was fun/10

I actually think the 7 day time limit is low-key brilliant for tapping into the player’s own greed in seeing how big a pot they think they can tackle, at the potential expense of shooting themselves in the foot.

You could try and play conservatively, but where’s the fun in that? What’s a few more enemies, right~?

Say it with me, everybody: Waffles are awful.

Okay, maybe that’s an exaggeration, but I liked the sound of it. Anyway, they’re definitely the most obnoxious enemy. They get right up in your grill before firing their aimed shots, and even if you have a lot of firepower, it’s hard to actually focus them down because their jump height is random. A lot of the time, the best you can do is just stay near the bottom of the screen and chip away at them bit by bit.

Speaking of aimed shots, the other enemy that aims directly at you, the coffee cake, is also very oppressive. Their constant barrage of aimed spread shots demands that you keep moving, but you also get punished for moving too much, as the spread gets messy. They sit completely still, which makes it easier to focus them down, but that also means that you have to actively watch for them and move to attack them, which can be difficult.

The very noticeable difference in enemy threat levels highlights the limited control you have over which enemies you go up against. When I first started playing, I thought that I could avoid having to deal with waffles by just not attracting any more waves when they popped up. But no, once you see the enemy name, you have to fight it. Boy would I have loved to get just one chance to veto those waffles.

I’ll also mention that the amount of time you have to decide whether or not to attract more waves seems a bit short, but perhaps that’s just because I was going for large numbers of them. I eventually managed to clear New Game+ in 2 days after many, many attempts. I don’t feel crazy enough to try for the 1 day clear, but I imagine it’s possible with enough luck.

Overall, it was a pretty fun Touhou-style shmup. The gradual transition from quick movements to simply blasting away most of the enemies before they build up is pretty nifty.

I’m not very experiances with shmups but the enemies, waffles especially, seem too aggressive. Tone most of them down a little bit. For the waffles maybe have them shoot earlier and less shots?

Wow, you’ve matched my record! I’d be surprised if anyone manages 1 day. So, I don’t usually take the edge off these things but I have to respect that. Here’s a new version:

With the deadline about a day out, this will probably be the final version, so I would appreciate if someone can verify that it hasn’t broken everything. Thank you all for playing and leaving your thoughts.

This game is very fun, the newest update works fine and makes the experience a lot better for me. I’m not the best at these type of games so I struggled a lot again the waffles in early rounds. With the changes they’re much better to deal with and I’m having a better time.

I like how as Sweets gets heavier she gets slower and slower, her poor broom!

Not really my style of game but honestly, it’s very well made! I did play it through to completion and play a little bit of NG+ but I doubt I can get the best ending lol. Great job overall, it seems like a solid entry to me!

I did a let’s play

Thanks for playing! I’m glad you found it enjoyable.