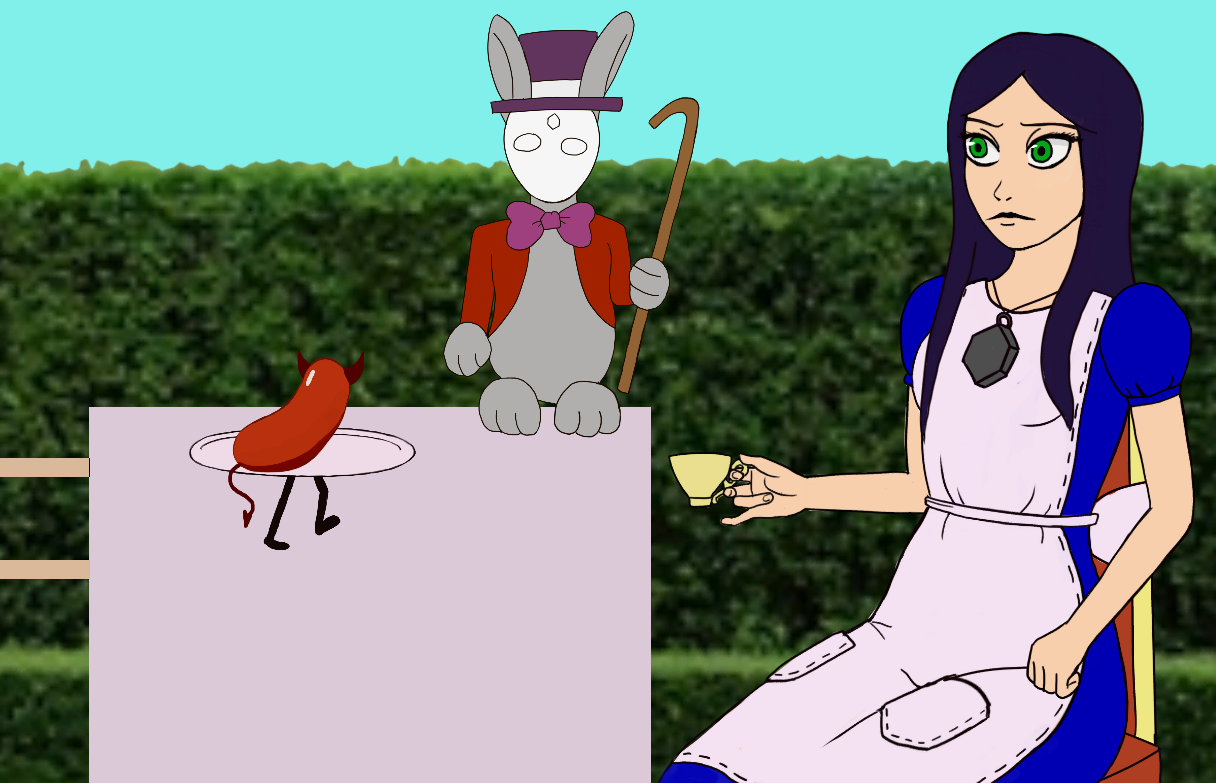 Alice is invited to a tea party where things quickly get out of hand.

Here’s a game I made in less than two weeks for the Gain Jam. The theme is “hands off”, hence why the player cannot control what foods Alice eats, only what foods reach her end of the table.

Alice is based on American McGee’s spooky adult version of the public domain character Alice.

From someone with a similar name,
This was a pretty swell game.
Not a move wasted,
Curious about the challenge, blasted.

I did my best to pace the dishes,
not sure if alice could lose from excess.
But at this point I digress,
I tell no apparent flaws, only best wishes.

This is a great game! I feel there’s a fair difficulty balance, and I especially adore the stomach noises, since games like this don’t always include them.

Two small bits of feedback though: first, I found the down to move a platform up and vice versa a little unintuitive at first (it’s not game ruining though), second, I think it would be really cool if after the end dialogue you could stay on the view of Alice stuffed and listen to her stomach until you clicked a button to return to the main menu.

As always, I’m waiting to see what you do next with bated breath!

PS: I’m not sure if you have a thread for it here, but I really liked Mangia! as well!

I’m really loving this game, up to the point that the most I like is the “To Be continued” , for I really hope that you improve it.

As it has been pointed, I too liked the stomach noises, and Alice’s reactions, I would like to see if be could trigger them in some point, like “eat meat pies for gurgles, sconces for hiccoughs, sandwiches for burps”, just like I sometimes let a sausage slip in because I really like the reaction.

Couple things I found out:

As I said, can’t wait to see what else with be coming!!!

Love this game! From the art to the sound effects, this is my favorite game of the jam so far! I cannot wait to see more from you!

I went down the rabbit hole.

I really enjoy this game! The art, the gameplay, the content, all fantastic! My only complaint/nitpick? is that it would be nice for the player to get a chance to admire their handiwork after the good end. We see her stuffed, but we only get to focus on just the belly, and see just what we stuffed her with, on the pause menu. Nothing major, and the game’s really good otherwise, just a suggestion, maybe.

Overall, I’m a fan of this entry, and I look forward to any potential expansion the “To Be Continued” ending implies!

Hexalto again is true to form
And so the reception is suitably warm
Though I must confess it was a fiddle
Switching the bridges, top bottom and middle

The game had good flow, Alice could grow
Occasionally dishes got stuck but hey ho
What’s coming up next? I’m eager to know!
So down the rabbit hole onwards we’ll go!

Thank you, I’m glad you liked it!

Eating meat pies, scones, or sandwiches has a chance of causing a gurgle, but only after she’s eaten a certain amount of food. If you make her eat three things within a span of five seconds, she’ll either hiccup or burp. As for the food getting stuck, that was an issue I was constantly messing with while testing the game, in the end I just settled on having the food despawn a few seconds after getting stuck.

I liked this one a lot, would love to see a continuation. Simple but fun enough to make me play it a few times through and great art/sound. Out of curiosity, there’s no alternate ending or bonus for finishing with no sausages is there? I got pretty close but one or two get through

There’s no alternate ending for that. Good job though on managing to avoid the sausages. I believe it is possible to get her not to eat any at all but I haven’t managed to do it.

Fantastic job with this, at first I was a little weirded out by the controls… Then it just clicked! No idea why, it just did and it was awesome! The only thing I will say is that I think the ability to scroll the camera was a little pointless. I kept the camera mostly to the right to watch a certain cutie balloon, whilst still having a decent eye on the food walking in.

I noticed a handful of little glitches but they did not detract from the game one little bit! Not requiring a perfect run to reach the end (I’m fairly sure I got the best ending) was a smart move and made the game very resiliant!

I think you’ll do rather well honestly, I was certainly impressed by the quality of your game! Best of luck to you!

I did it!!
Can’t show it at the very end as the game don’t show the full statistics, but 23 meat pies, and no sausage: 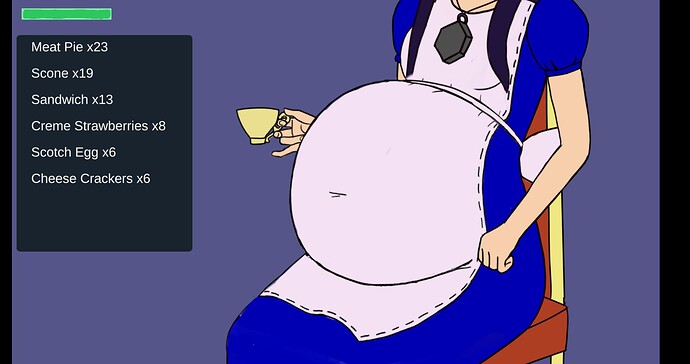 And the next pie is coming right up: 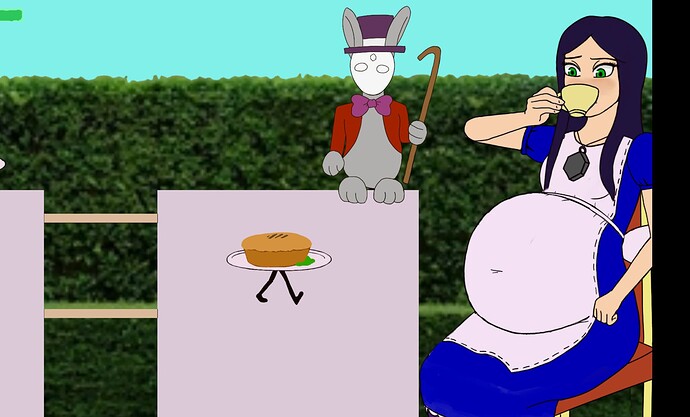 This game is awsome i cant wait next part.