The House on Hog Hill - 'Chapter One' Out Now! 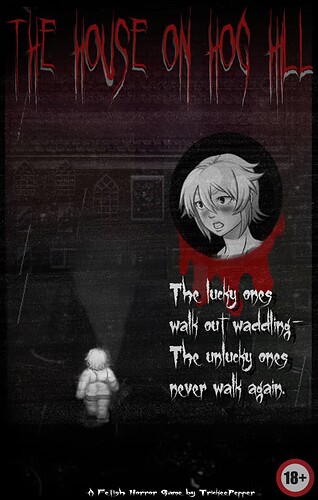 You awake in the outskirts of a small town you’ve never been to, lying next to the wreckage of a car you don’t recognize. Dazed and confused, you stumble out of the woods in search of answers.

But something is out there, hiding in the shadows, stalking you. There isn’t a single other soul in sight, and your only weapon is an old flashlight. You need to find shelter, before whatever is out there finds you.

Welcome to Hog Hill. We hope you enjoy your stay.

Finally, the first chapter! So excited to be (mostly) done with this first part of my survival horror weight gain/transformation game. Some of the art is temporary/unpolished, and I plan to add a few little finishing touches down the line, but I’m so excited that it’s fully playable that I couldn’t wait any longer before releasing it to you lovely folks.

If you’re a lover of horror, bad endings, humiliation, transformation, and really fat guys and gals getting even fatter – Give it a try!

Length: Around 10 minutes if you’re rushing through. Finding all the endings will probably double that.

Thank you for your interest, and don’t hesitate to let me know what you thought if you give it a try!

Oh boy, time to put off work and to this instead

Totally not just messaging to get updates - looking forward to it!

Played through the demo, good work on things. I don’t necessarily appreciate bad end hunts, especially with having dispersed save points, slow walking, trial-and-error gameplay, and getting sent to the title screen on death, but I do apprecite how much thought and effort went into this first outing. Good amount of potential here.

Heads up, though, Bad-End #3 doesn’t work. You didn’t give out the item to trigger it, only set the switch for it.

EDIT: Ignore me, it DOES work, I COMPLETELY missed another room and mixed up the triggers. You are good.

ok, imma be real with you, fam… this is the best fuckin weight gain related RPG Game ive played in a while, legit cant wait for more future updates X3

Thank you for the kind words!

I know games centered around finding all the bad endings are controversial and frustrate a lot of people, but they’re usually my favorite part about fattywank games, so there’s definitely still gonna be an emphasis on that going forwards.

Later chapters are gonna be waaay more slow burn though, and there’ll be longer stretches of unbroken gameplay. I appreciate the constructive criticism! Maybe I’ll try to make the checkpoint system a bit more forgiving for future chapters to mitigate some of the trial/error frustrations.

Ignore me, it DOES work,

Phew, I was wondering what could’ve gone wrong lol

Wow, thank you so much! Glad you enjoyed it. I’m even more excited for where the story is going next, and can’t wait to show all of you!

Oooh, this shows promise. Looking at those content warnings, you have my immediate attention.

Looking at those content warnings, you have my immediate attention. 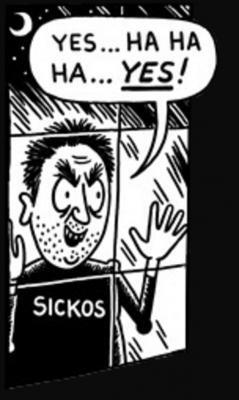 I’m among my people. Shit’s gonna get crazy in the upcoming chapters

Is there a scene with the unmarked VHS tape? You can pick it up from the plant but it doesn’t appear in your inventory and clicking the TV doesn’t trigger anything.

Is there a scene with the unmarked VHS tape?

Whoops, meant to remove that lol. There actually was another optional scene I was planning related to it, but I decided to cut it. You’re probably gonna see something very similar pop up in a future chapter, so I guess it’s just a tease for now!

After playing it a bunch and finding all of the endings, I’m definitely excited for what’s to come, especially some of those content warnings that have not been touched yet. Playing it reminds me of the fattening, but it’s got so much more to it, it’s got a foundation to be built on. I also really appreciate that with this bad end hunt, which I personally enjoy, that you give the option to back out before you’re stuck in the bad end. I really enjoyed the delay on ending two and I’m excited to see if there’s going to be anything else like that in that it doesn’t occur immediately. I gave your Twitter a follow to try and follow on development, but I wanted you to know that it’s not linked in the op, it is in your profile though.

ok this said there 6 endings i gotten 5 and my smooth brain don’t know were to look for the last one.
the endings i gotten are pool,cow,mirror,teddy and captive. can someone point me to the right direction please.

It’s Nerd you are missing. The room you can find the VHS tape can be found in the bedroom to the left of the Mirror bedroom. Yes, there IS a door there. Yes, this fucked me up too, I legit had to go into the data of the game to even realize that.

thank you i would not have gotten that.

Playing it reminds me of the fattening, but it’s got so much more to it, it’s got a foundation to be built on.

That game is a huge inspiration, to be compared to it is such a nice compliment! Ever since playing those games I’ve wanted to see more just like them, and I got tired of waiting so just decided to do it myself, lol.

anything else like that in that it doesn’t occur immediately.

Don’t wanna give too much away, but more stuff like that is definitely in the works. Bad End 02 is probably my favorite out of the six.

wanted you to know that it’s not linked in the op,

Ah, thanks for pointing that out. Updated!

got me tuned i love dark themed games

Well this good and scary… I have to say the sound design is good I had to look over my shoulder a few times also the fact that your field of view is so low that adds to the horror very well because things will run past your view so darn this is A very good start to sometime fun.

Pretty good. I found all the endings without much difficulty and they were all entertaining in their own right, I’ve never been a fan of Nerd TF, but that was the best one in this game. That and Cow was plenty of fun, the bad ending hunt was pretty fun too! The trash can in the beginning was a bit too obscure imo, nothing else was that hard to figure out.
I love the tense atmosphere of the game, but some of the scares felt pretty cheap, the pool one was really just a loud noise going off. A bit disappointed there was no “Itchy tasty” reference, seemed so obvious to me!

Can I DM you sometime? I actually had a poll some months back about adding a slob mode to my own game, so I’d like to pick your brain about it.

I look forward to the future of your game!

Dunno why, but WINRAR keeps saying that some files are corrupted. And it seems that they had been corrupted on Mega itself, and now any copy i TRY to download will have the corrupted stuff. I am pretty sure that it could be that my pc crashed multiple times while Mega was working that it went wrong, but i’d be very interested in trying the game.