Thoughts on a WG rpg maker game with monster girls?

I thought it would be a fun project to do an rpg maker game focused on monster girls. Main character is a slimegirl, and the working title is Hungry Slime rpg. Though that might change. It is my first time using rpg maker as well so any tips early on would help. Biggest challenges will be art and learning the program. If anyone knows someone who can do art, I am can pay a small amount for their help. The game itself involves running around and trying to stop humans who are capturing monster girls, recruiting some of those girls, and stopping the humans once and for all! Oh and obviously getting them fat too. Might contain vore, haven’t decided if it should yet. Let me know your thoughts!

Update: Work has started on it, mostly map making, planning, and working out the systems. There is also a bit of art done for it, which I might share once we get some more done. Thanks for the support guys!

Sounds interesting. A bit like Edypos, but with a monster PC rather than just the followers. Will want to keep an eye on this if it progresses.

I personally dig that idea.

I would totally be down for this!

I’d play it. What other kinds of monster girls are you thinking of putting into a game like this?

So far I’ve got plans for lamia’s, arachne, mermaids, bee girls, harpy’s and of course slime girls. I’m always open to suggestions to what you guys would like to see though.

How about a Lovecraftian being girl.

That would certainly be uh, interesting lol.

Wouldn’t mind the possibility of seeing some lupine and vulpine girls, along with cow girls as well.

Do you intend to have a small party of recruitable characters, or do you intend to make it a proper monster-catcher, with lots of monsters to collect? Because that’ll inform the size and makeup of your roster. It might be interesting to treat this game something like the new SMT game, where the player character is super versatile and can align himself to the game’s different elements as needed (which would be easy to mimic if your protag is a shapeshifting slime), but you also have room for 3 party members you can swap out from the game’s roster of demons. If this isn’t that kinda game, that’s fine, I just wanna get a sense of what kinda RPG this is.

Even if you don’t want a monster-collector with lots of types of monsters, you still have plenty of room to make NPCs to cover other types of monsters people want to see. If I need an idea for a monster, I usually turn to mythology/folklore for some unique ideas. Doesn’t have to be humanoid per se to have something interesting to it, either, it just needs interesting potential for character design. You could just take animals people don’t work with often and make something of them–crabs and mantises seem pretty rare, for instance.

That would certainly be uh, interesting lol.

It has been done. 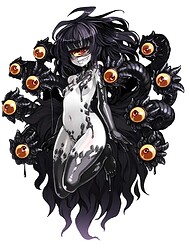 Might contain vore, haven’t decided if it should yet. Let me know your thoughts!

Vore sounds like a useful way to justify working wg into progression. Eating humans could allow monsters to get more magical powers, but make them fat in the process. You can also work in an “evolution” mechanic if this is a monster-catcher; you could feed monsters you’ve recruited to your other monsters to make the receiving monster stronger as a sort of “fusion” mechanic.

It would be a small party, I would love to do a more monster catcher style game but theres two reasons I’m not. 1. I’m not sure how to add a feature like that into rpg maker, and 2. That would require a lot more art since there would most likely be more monster girls to catch. Maybe one day in the future but unfortunately not now. There are some plans for class/sprite changes with the mc. But those haven’t been fully planned out yet. Also yes there will be vore in the game, the system for that is going to be somewhat similar to how Fatties Eating Fatties handles it. Overall a lot of great ideas here, if this game does well I might try again for a collect-a-thon style monster girl game lol.