Taking in everyone’s inputs so far I realized there was a need for a second project that could easily include what is being asked for. My other game Corrupted Powers is mainly story driven and won’t be completed for some time due to the length and compexity of everything. It is still being worked on and will be co-developed along side this new “game”.

What am I doing exactly? I’m creating something similar to a stuffing sim that will use a good deal of what’s already created on the backend to speed up the process. You will take the girls/ possibly guys too out on dates and you will “shape” them. I’m starting with one person and will branch out from there. When should you expect this to be available? Within the upcoming week. I’ll have screenshots going up tonight with the screen layout and such for the game.

Again this isn’t replacing the other game it’s just a way for me to get something out for you all to play with much quicker than my other project would end up taking.

Variables are not hooked up yet. It’s going to be a very basic game at the moment though more will probably be added later.

Here’s a screenshot of what the window will look like. 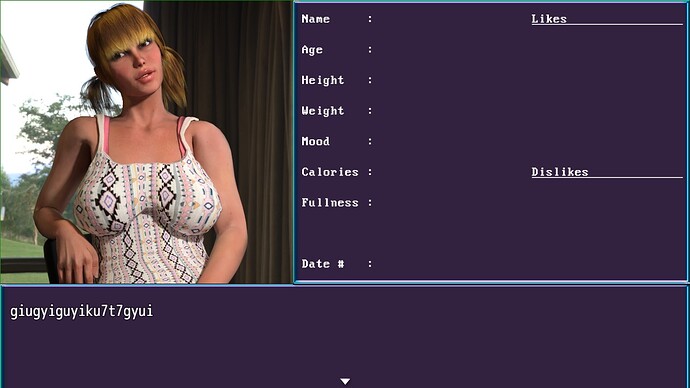 The graphics look pretty nice, I can’t wait for this

Looks mint so far, I like how you’re using this as an almost demo, if you will, for the mechanics that we’ll see in Corrupted Powers (which I am also super excited for).

@ibentley38 Can you make this Mac compatible please! I really want to play it!

I was able to get the variables all linked in and showing in the correct places. Since then I haven’t had a chance to even be on my computer to do any work. As soon as I get one girl done this will be released so those of you who want to mess around with it can. Also being that it is a smaller project I can see about having it available in other OS environments other than windows. Mac will be easy and very doable. Phones may be harder and will be looked at. I may have to change the aspect ratio and text sizes.

This looks exciting. Looking forward to it with baited breath.

As stated in my other post on the Corrupted Powers project, I now have enough assets to begin moving forward once again. I won’t be on my pc tomorrow, but Friday and Saturday I should have some time to get more images done. Both of these projects are very image intensive, but my aim is to keep the image size down so a 10-20 minute game/demo for some doesn’t end up taking longer than that to download. Yesterday I did however create 8 seperate “templates” for lower body, torso, and upper body changes so those of you who had asked for a different body types can get your wish for this project at least.

@ibentley38 Lookin forward to playing it!!

Is this still being worked on? not that I’m rushing you