I’ll be updating this thread every time I add something new to the game, so everyone can see how progress is going. I’ll be adding screenshots as well, whenever possible, and I’ll make the game available for download as soon it reaches a playable state. Anyone is free to reply to this thread.
Let’s start off with today’s work:

When is the game going to be released?

When is the game going to be released?

I’ll start releasing versions of it as soon as it’s actually fun to play. Until then, I’m working towards that goal!

I can wait to try this

-Finalized weight distribution: with different foods you can change the stats that dictate where the fat will deposit.
-Added a short intro that explains controls
-Added a hidden stat, Potential. When weight goes up, potential goes down. When it hits 0, your cow won’t gain any more weight This is to encourage players to not stick with the same cow throughout the game.
-Added a couple of events

The game is almost at a playable state! I’ll upload a few screenshots later.

Can I just say, I love the prospect of your game. I adore every bit of the idea, and I’m impressed by the enthusiasm and drive that’s reflected in your activity on this site so far. I just felt I wanted to properly welcome you, and provide some well deserved encouragement.

-Added a hidden stat, Potential. When weight goes up, potential goes down. When it hits 0, your cow won’t gain any more weight This is to encourage players to not stick with the same cow throughout the game.

That being said, can I be the first person to voice my concern in this particular change. I don’t think this is the way to go, and IMO goes against immersion as well as fun. I would suggest looking into other ways to encourage players to get new cows throughout, like cows with better gain rates, milk yield, or otherwise. Surely keeping a dear cow around and continuing to fatten her up is huge appeal, and shouldn’t be outright barred? If anything a lowered gain-rate past the potential might be a good compromise.

Very much looking forward to the screenshots!

Yeah, you’re right; I’ll change it later so that when potential hits 0, weight gained is reduced by 50%.
There will be means to view and possibly increase potential, by the way.

-All main shopkeepers have temporary talksprites, which means they all have designs. They also have names now!
-All main shopkeepers have a short intro they’ll do the first time you meet them, explaining what their shop deals with.
-You can now build a few structures, so now all three main shops are in full working condition!
-Shops now close during festivities.
-Setsubun festival! An Oni girl will visit you and demand you give her beans.
-Added the first non-cow monster girls: 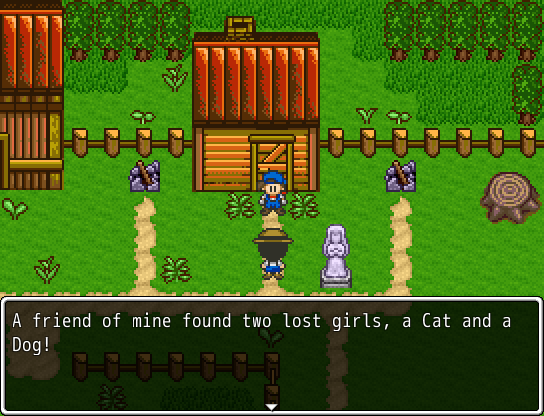 Yup yup! You’ll be able to choose between one of them. How I’m thinking of making them work is that you can feed them and make them gain weight (just like cows), except without stats, so there won’t be any unique catgirls and doggirls. But! You can have them follow you around while you run errands (if they’re under a certain size, i guess. I’ll have to decide a limit), they’ll take part in certain events, and probably do other stuff.
-You can now name your character whatever you like! Modern technology is staggering, huh?
-You can’t go to sleep if you haven’t been outside your house. That way you won’t miss out on any special events by accident!
-Added the skeleton for random daily events.
-You can jump down short cliffs!
-You can talk with shopkeepers!

As always, feel free to suggest anything that you’d like to be in the game! 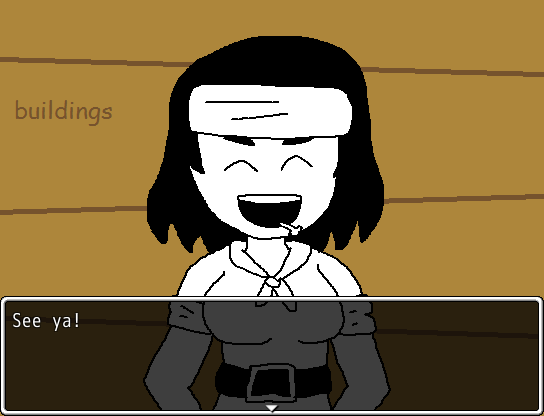 We’re getting closer and closer to the first release!

-Added more weight gain stages; there are now 6 hip, 5 belly and 7 breast stages (unevenly spaced out, so the current sprites support weight gain up to the 12th stage of size, which basically means that the biggest possible cowgirl almost brushes the edges of the screen). Since I’m working on more right now, there’ll probably be more while you’re reading this.
-Added more faces and hairstyles! There are now 8 face variants and 5 hair variants (there will be at least 20 of each in the final game, if I get enough support maybe I’ll put even more)
-kept working on shops and upgrades
-kept working on cat and dog mechanics
-finished up some overworld sprites
-did other stuff I don’t remember??

That’s it for today! Have a randomly generated cowgirl~ <3

Wow, you’re really making progress pretty fast on this! Can’t wait till you get a play version out, so keep up the good work!

Yeah, and that cowgirl looks adorable, too. Well done!

Apart from the heresy of there being fewer belly drawings, this is looking great so far!

I’m cautiously optimistic as I can be!

Loving it, can’t wait for more!