You are captain Spacegal, stranded among bizarre remnants of what seems to be a spaceship filled with teleporters. Without a rocket backpack, jump boots or anything of the sort, your last hope remains in your species’ inate ability - to rapidly inflate! 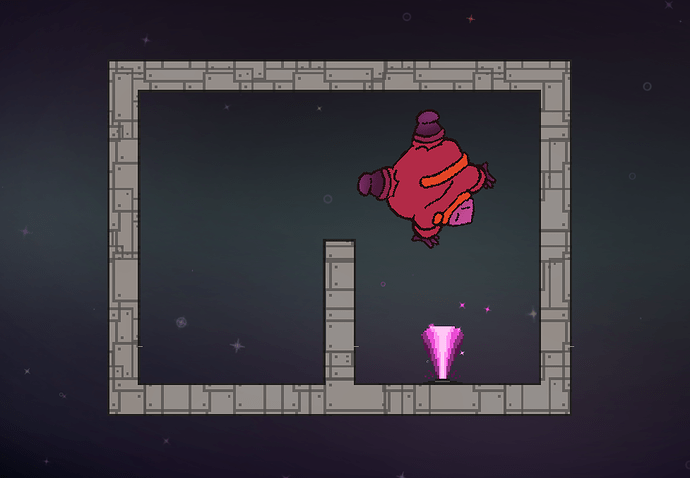 What to expect from Vacuum Voyager:

This was pretty cool! I like games where you have plan angles and where things are gonna bounce and stuff. It needs an exit button on the main menu, though, and probably an escape menu to let you exit the game too.

Thanks for playing! I’ll definitely try and include those in the next version.

Cool game, and interesting concept! I liked the variety of levels you made, and all of the different mechanics that worked well with the general concept. Great job!

This game is really fun and cute, i love how the difficulty ramped up each level and how you introduced new mechanics as the levels went on. I really hope you expand on this game. Nice job

The large amount of mechanics that keeps the whole thing fresh is really appreciated!

The only things i can suggest if this project is continued are to add level resets and ways to exit/navigate the game’s menus.

Thank you for this wonderful game!

This was a fun little physics puzzle game that makes an interesting use of inflation which we do not see often on the site. Along with that the sound design was quite good with the music fitting the chill space theme of the game and some of the best use of fetish based sound effects I have seen up to my point of judging. The use of having to deal with the varying size of the character as they bounced around in some of the puzzles was also quite fun. My only main suggestion is it would be nice to be able to control your velocity a bit more but all in all its a very nice framework to build a more polished game if the dev wishes to continue it.

I feel like I could easily find this on newgrounds or kongregate. It even has a lot of nice touches. I admire any game/team that makes their own music for the jam as well. I think the game only just passed into the “game uses the theme” category because it’s mostly just a momentum based puzzle thingy, but ultimately your change in size over time is good enough to justify full points there. i would like to see more levels and mechanics added. And it would be good to see more interesting uses of the existing mechanics too. Nice job.

This game was an interesting take on the kind of minigolf/pool genre, where you have a set number of bounces before you either fly off into space or end up on a surface/the goal. I like it a lot, and I think its a decent use of the theme. The music was chill, the sound effects felt seamless, and the overall look and feel of the game was solid. Really, my only complaint was that the solutions to each map left very little room for improvisation and felt more like a test of getting the angle pixel perfect rather than solving a puzzle. Having sub goals like getting keys or opening doors, I think, would add a lot to the game and would allow you to use the extra features you began adding like the sticky floors and oxygen tanks, in more interesting ways.

A very solid puzzle game with a nice use of inflation as a propulsion mechanic! The difficulty scaled well and teaching players about new mechanics was done well with the level design. A pleasant game to play, I hope to see more, great job!