Waist of Space is a sci-fi, furry expansion VN centering around a crew of spacers hired to recover the flight logs from an abandoned space frigate. Will they complete their mission, or succumb to the horrors within the derelict ship? Only time will tell… 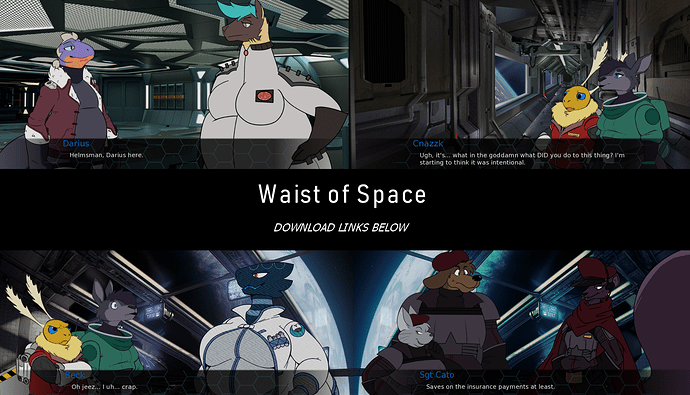 very fun story; your CYOAs have been very good!

My only regret is that I wish it was longer. This is some really good stuff, though!

A cool showcasing of characters! Within this small game they still managed to inject a lot of personality into the characters. It was a smart idea to have (mild spoiler) three branches exploring all pairings and the interpersonal relationships within the team.

Good job on this one A.I route best route and true route, don’t @ me

I have to said this was well put together and well made in fact I hope to see more.

This VN was superbly written and presented. The writing developed characters and the hints of backstories that I am eager to see explored in a sequel adventure. At first, I was wondering if their should have been more story options, but you maximized each route with unique, divergent storylines. I actually found it more effective than some other interactive stories that have more choices but less true paths (since they quickly converge with the selection having little effect). The suspense was expertly constructed, with the split teams opening up more interpersonal dynamics than if we had to keep everyone together, sharing the spotlight.

But the pièce de résistance was the visuals. You had me at the blinking, but the expressions? *chef’s kiss* Magnifique. The motions were so fluid. The lighting and vpunches, coupled with the sound effects, lent action to the VN. The art style was cartoonish, but clean and complemented by the backgrounds and music. The bloating stages were cool to witness, and I adored the outfits.

I probably had more praises to sing, but I have a splitting headache right now. I may edit this later if I find more aspects to comment on. In short, I am glad that I have messed around with Ren’Py enough to know that this is a quality VN that brilliantly showcases the features the platform offers. I look forward to seeing more from you and your team in the future. In the meantime, I will delve deeper into the code. I must learn your secrets!

So I have the .RAR file from the download but I can’t just open/run it, do I need to unzip it or use some other program?

Right on the nose mate, .rar files need to be unzipped first.

Alright, thank you for your help!

Alright I’m having an issue, whenever I unpack the .RAR file I get nothing. The unpacked file is completely blank and I dunno what the issue is.

What are you using to extract the files?? I always use 7zip, but I know some people use WinRAR.

I used ‘RAR Extractor’ , though I’m trying a .RAR to .ZIP converter at the moment

Okay, so to be honest… I have no clue what you are doing. The .rar file is just the code compressed to save space and to make downloading quicker, so I’m pretty sure all you need is a program that can decompress those files/extract them. I don’t think you need to convert the file to a .zip, because I just tried extracting the files with 7-zip a few minutes ago and it still worked. Are you using a pc or is this something that’s up with macs that I don’t know about??

I’m using a regular PC, though I have not had much experience with .RAR files so I don’t know any good software. Will let you know if the .RAR to .ZIP method works

Okay, I’m interested to see how this goes. A simple Google search didn’t bring up anything called “RAR Extractor”, so if that doesn’t work, I use 7-zip and it’s free and easy to find with google.

Turns out the RAR to ZIP conversion method actually worked!

!!!WARNING SPOILERS DETECTED! DO NOT CLICK ON THE REVIEW IF YOU WANT THE STORY TO BE FRESH!!!

If you have any objections, critiques, or your own opinions on my review let me know. Again this is my opinion, avoid taking it at face value and form you own opinion on this game before you read mine.

I’d honestly forgotten about this game until recently and was about to try it. However, it failed to download for me, for some reason. Not sure as to why.

Edit: reattempted download. Got as far as 26.1 MB, then the download stalled, saying it failed about five minutes later.