I’d just like to show off a bit of my homebrew GURPS stuff for weight gain stuff. I’ve showed it around a couple of Discords pertaining to ED&D, but I got no bites. I’d love to test it, and improve upon it, but I do need players to play with. What I’m trying to do here is to ask for people to play with, or at least run a game with just to test the system out, and see what I can add. 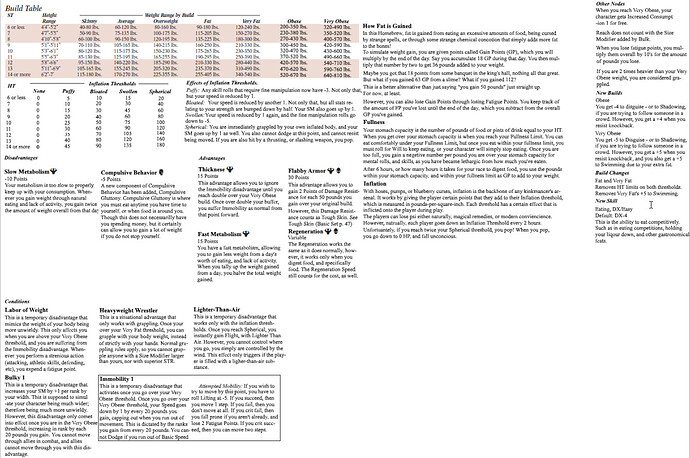 Here’s what I got thus far, if you see a thing you want added, or should be fixed, please tell me.

Hello, new account here. I wouldn’t mind joining depending on the time.

But I haven’t played D&D in a long time and I am not familiar with how D&D is played online. Do you mind having a beginner and do you know any good sites for looking up rules and how to play online?

Also, would we have to use microphones and stuff?

Sorry I didn’t make it clear, but this is running on GURPS. As for your microphones question, we’ll definitely be using text.

Oh that’s my bad. I haven’t heard of GURPS before. Is it particularly hard to learn or is it similar in rules to D&D?

I would say that im interested but I only have ever done 2 sessions of pathfinder and would probably be annoying given I would be asking what im supposed todo for every roll and setting up my character ect ect.

Gameplay-wise, GURPS only needs 3 six-sided dice, and a character sheet, the only complex thing in this game is character creation, and a few others. But, alike any other tabletop game out there, it gets easier as you get used to it.

I have been looking at some of the basic stuff, with the character creation we get given a character point total I think. Does that mean that when it is decided who is playing we will create the characters together at the same time?

Which GURPS edition is this for? I have 4th edition basic set, Discworld, and couple others but I’ve never managed to sit down and run a game.

It is in 4e, yeah. I can DM you the discord link if you want.

yes, exactly. do you want the discord link too?

Appreciated, but I can’t commit to anything right now. Things are up in the air such that I may either have no free time, or nothing but in the near future. Good luck.

Hey would be down to try your GURP stuff

Sweet. I would send you a DM with the discord link, but I’ll just let people who are interested join in the discord.

I’d like to join if you don’t mind that it would be my first time using GURPS. I’m willing to learn though c:

Yeah I’d like a link as long as you don’t mind playing with beginners. Do I need to do anything on my end to receive the DM?

actually, we have a full party at the moment. while the topic was up i advertised a little, and got a full party. thanks for the interest tho!

I hope that this thread is not necro, because I am very much interested in participating in a weight-related GURPS campaign.