I’m a little surprised this hasn’t been brought up at all, though I suppose it makes sense considering the age of the game and how the graphics are subpar by today’s standards, but I remember quite a few years back I played Tony Hawk’s Pro Skater 2x (the version for the Xbox, but this existed in the earlier versions too) and unlocking a cheat called weight mode after beating the career a few times.

The game didn’t have a whole lot in the way of character customization, especially considering how much more was added in the later games, but I remember immediately creating a female character, turning that cheat to the max and being… pleasantly surprised. I may just be looking through nostalgia lens’, but I honestly feel like it was some of the best weight-related content I’ve seen in any game. The weight they added actually looked like added on fat rather than just making everything bigger, which is something the WWE games for example haven’t quite been able to, or I suppose even bothered trying to, get right, despite them having some of the better weight customization aesthetics I’ve seen in games.

I suppose my point is that it just kind of makes me wish other games would do things like this, though not necessarily in the form of cheats (I know how much of a pain those can be to integrate into a game).

Also, I wish I had pictures or something of it, but I couldn’t find any showing it off online and I haven’t been able to play it at all in a long time due to no longer having an Xbox and being unable to find the game. RIP.

Update Turns out that Tony Hawks Pro Skater 2 is free for PC on My Abandonware! I’ll try and take a screenshot if I have time today. For now, here’s the link 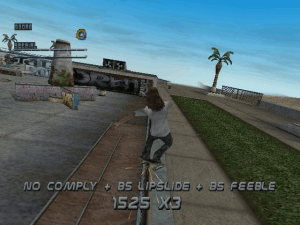 Remember Tony Hawk's Pro Skater 2 (Windows), an old video game from 2000? You can play it again for a cheap price.

Yeah, that would be great! Thanks! Unfortunately for me, I can’t play because my computer is broke. But I look forward to seeing if the weight thing is as good as I remember it being!

It’ll be a hard processes to install, because it’s a download of an ISO file, so getting it to run without a disc is tricky

Quick update. I’m sorry to say that the game is just too old for my computer. It took about 2 hours to get the start menu to launch, but sadly the game will simply crash every time the actual game is started in any mode

Oof. Yeah, that makes sense in retrospect. Sounds a lot like what happened when I got Knights of the Old Republic and tried to play it for the first time.

Use a virtual maschine (XP or Win7) and try it again.

That’s a good suggestion, but I don’t want to spend more time and effort getting the game to run as of right now, as I’m keeping myself busy with other projects.