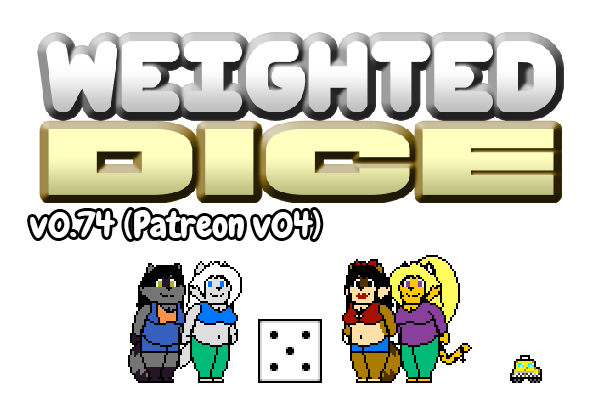 About:
Hi, I’m GLWuffie, a fatfur artist working on a few projects. One of the projects is called Weighted Dice (formerly just “Dice Game” based on the artist JayTee and their Dice Game comics).

The main goal of the game is to roll the dice and based on how much you roll, your character gains that much weight… it’s an interesting setup for a comic (JayTee’s Dice Game 1 & 3) but offers little in gameplay. So I added a boardgame concept with it (JayTee’s Dice Game 2) but instead of events happening (yet) there’s simple bonus spaces that use a colored card system. Right now it’s purely local play, no plans to do online play as of now BUT if you do want to play someone online, you can use a program like Parsec.

Why only Patreon (early access)?
As stated before I have quite a few projects in the works. I’ve been promising my patreons a few game ideas but some of them had some annoying bugs/a ton more work involved I wasn’t able to deliver a satisfying playable demo. This WILL be released to the public… but patrons will get early access as well as maybe a few other bonuses. I’ve owed a bit to my patrons and this is one of the way I’m making up for it (plus the support and income really help me to dedicate more time to work on it).

Screenshots: (as of Beta v3) 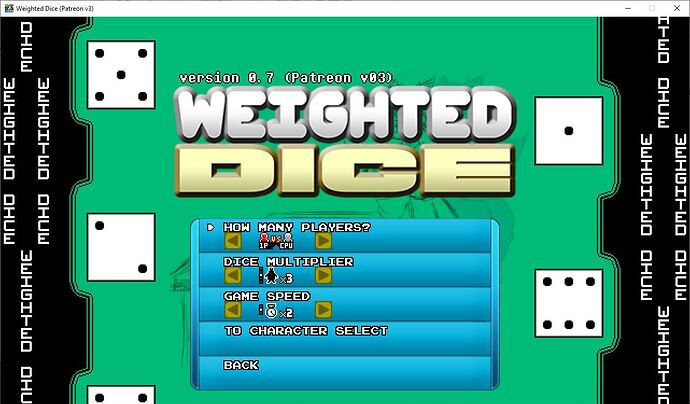 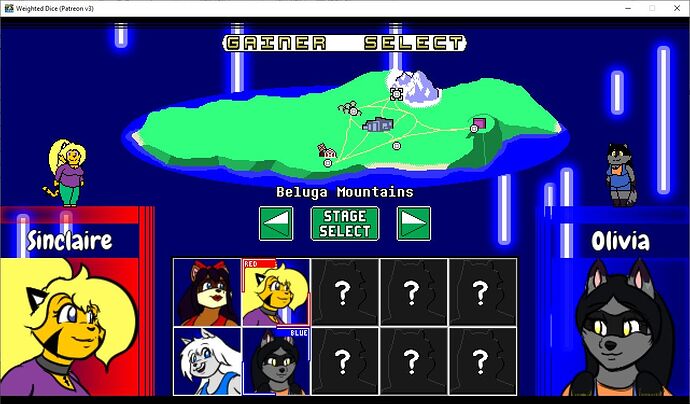 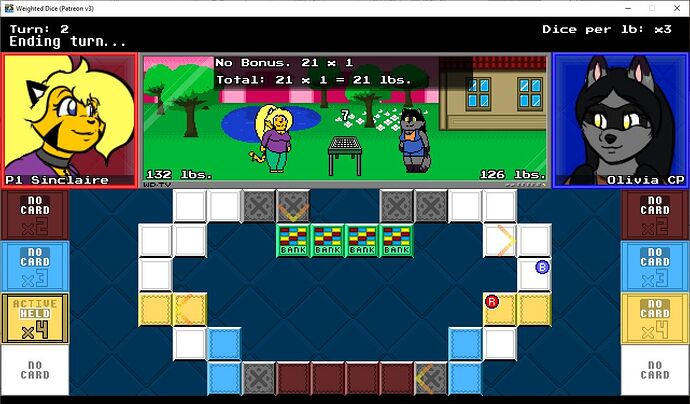 If you have any questions/comments/concerns, please let me know!

-ps Fun Fact: The Rebbecca sprite was originally from another project I was working on for RJS. I used that as a basis for the GL sprite.

Will you be adding other characters?
Would you take submitted characters?

There will be more character for sure. Right now I will be extending the offer to few select people who’ve assisted me with various previous projects. After that I will think of a way to productively add other characters.

very interesting, shame there isn’t a non-patreon version yet 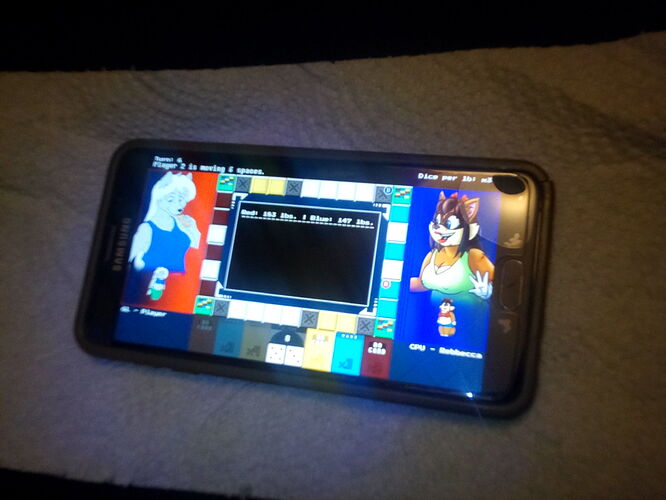 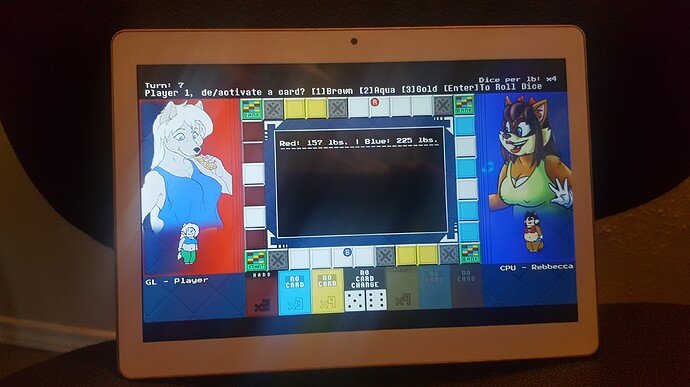 Almost almost ready for the next update! Not only are the mouse controls pretty much done but with it is: Android support! Now you’ll soon be able to have some furs gain weight on the go!

Non-patrons will be getting the previous version (Windows Only) when this releases, so stay tuned!

Question, how many characters would be available in this game? Along with their genders, too. I’m curious if there will be more male characters in these fetish games.

The first goal is to possibly hit a minimum of 10 (possibly up to 20 in the future) characters with the possibility to have more in the future. As far as what genders and who they’ll be, it’ll be based MAINLY on opening commission slots for me to draw their character/sprites into the game. I might give a few spots through contests or something… but I do want to cater to not JUST female weight gain, though it MIGHT be the majority so far.

If it’s 10 characters to start, I’ll try to see if I can get at least 2 male characters minimum.

Oh! So, it’ll be mostly OCs then? I figured there’d be like at least 2 or so generic characters or something.

I could potentially add generic characters specifically for this game… which would make sense if I were to add a story/arcade mode so there might be like a boss character or something as well. I have ideas for how a Story Mode/Arcade Mode would work, where it’s a more quick/limited version of the game with special rules on each stage.

Updated the links and description for v0.7! I hope you enjoy and I appreciate any feedback if possible!

Is there a mobile iOS version? I see one for android, but not iOS, and That’s why I play on

I would love to, but I sadly do not own a Mac device to be able to export it, even though I do have the export modules to do so. I’m looking to be able to play it on as many devices as possible in the future… but the only two FOR NOW is just Windows and Android.

Okay, well good to know, I guess. I do have an android, but it’s not my preferred device, so I thought it wouldn’t hurt to at least ask.

So quick an update? I felt this was really needed so to give more replay-ability, there’s a different board design for each stage now!

I’m bad with version numbers, but it’s kinda warranted with an upcoming feature being implemented as well as a few other fixes.

Just tried out the Non-Patron version of the game, and I gotta say it’s very fun! The game is simple, quick to learn, and easy to understand, and the sprites (while not yet those upcoming sprites which will be super cool) are really good. My only real complaint is that there’s no way to get back to the main menu in the middle of a game (or at least I can’t find the way back).
It’s not often you see a weight gain board game, and this one is great. I can’t wait for the extra characters update to be released to everyone, and I’m excited to see what else the future will hold. Keep up the awesome work!

Oh, and a couple ideas:

I downloaded the APK file, now what?

How can I install the apk file? I extracted it and I only appreciate mxl files and things like asett, I am sorry for an ignorant in this topic