This is my game jam submission, WG Gardener.

A simple pixel art platformer where you avoid the bees, water the trees and eat the fruits. And hopefully get fat.

This is a pretty sweet game! Though the controls are a bit difficult as you have to do a full turn to shoot and can only aim vertically. It’s really interesting though.

The controls are delightfully retro you mean? Of course they are! (Same with only being able to shoot horizontally, that’s how it always was back in the good old days.)

Not sure what you mean with full turn though, turning is instant.

And finally, I want to entice you all with a screenshot! 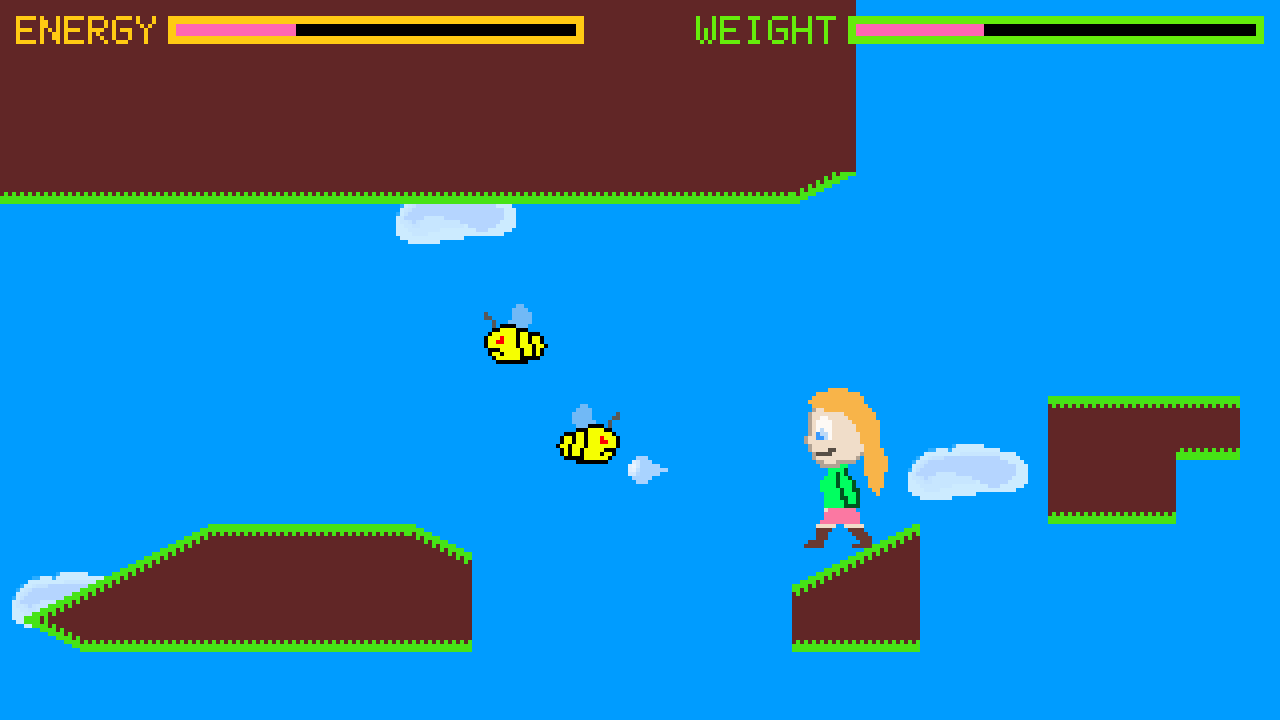 Well I wouldn’t know anything about retro at all xD

I don’t know, it feels too hard. I’m having the same issues that @Kitsune is having, and I can only get maybe 2 - 3 apples before I’m immobilised by the bees.

The trick is to wait for the bees, bait them and then shoot them. Since the trees take 2 buckets in the correct time-frame, you gotta wait until you get the timing down. After that it’s just waiting and waiting.

Gotta say that the beginning can feel a tad bit tedious with the small area and the way the bees work, but after I got through that I was pleasantly surprised by what else there was. Admittedly the gaining takes quite a while, but as soon as I understood that you can just lead the bees in an endless circle in certain areas, it became a breeze.

One last thing: I both like and dislike the way the bees work, since it’s pretty unique and honestly a good payoff for the work you do, but in my opinion it takes a good bit of the tension out towards the end.

Overall, I really liked this game, even with it’s tiny Problems here and there, well done!

Thank you all for the feedback. I’m planning the following changes:

I could also add some kind of cheat option for those who find the game hard I guess?

I have made prerelease 2 with these changes (no cheat option yet) and edited the initial post.

I think part of the challenge is that you shoot from the middle of your sprite, so even when you try to line up to face the bees and shoot, it can still be off. Part of it is that on keyboards, space is usually jump, so it’s a little bit non-intuitive to shoot using space while also struggling with the challenge of having such a small fire range for the bullets. I can feel a classic / retro style here, but they also had things like crouching to get a lower angle instead of standing. Aside from the game continuing even after you lose all of your health, it’s fun. I don’t see the weight gain element though, or maybe I just haven’t moved enough buckets to the tree.

Crouching is missing mostly because it would need more sprites. I might add it.

If space is usually jump, what is usually shoot? I never play using keyboards…

There is certainly WG, 6 different player sprites in total. You’ll need to eat 4 apples to get the first new sprite if you take no damage, more if you do take damage.

okay no problem! I did get to the second area at least.

it’s been my experience that the left hand is for controlling character, the right hand is for shooting. So it could be the left and right arrow keys, to shoot, for example, or mouse 1 / 2 .

The current controls let you use your right hand on space if you like. You can also use only one hand, and surely we want to support that even if the graphics aren’t particularly exciting?

I don’t currently feel convinced that changing the controls is a good idea. (Except adding crouch, which is fine if I make the sprites for it.)

If you got through the floor you did get the first sprite change. It’s not very in your face. (There’s also a sound effect when it happens.)

I’m done now. The release version has a game over screen with an option to cheat, so if you don’t want to git gud you can still finish the game.

Well, generally the keyboard control schemes I see the most are either WASD for moving and JKL to do actions (like jumping or shooting) or arrow keys for moving and ZXC for doing actions, so you might want to consider those. Space for jumping is almost always present in control schemes which combine both mouse and keyboard as well.

…What’s the cheat do?

I keep hitting space to jump. I really like this game, and I want to play it, but I can’t play with two hands on one end of the keyboard, and using Up to jump is never something I could do. Even back in the 90s when it was the norm.

I strongly suggest ACube’s suggestion, it would make it easier for a lot of us to play it.

Ok then, for you weirdos that want modern controls: Download this pck file and replace the one the game came with, you get to jump with space and shoot with z or j. I may have been a little silly in how I modified the instructions in this version.

And what does the cheat do? It makes you a terrible person of course. (And it lets you continue where you died.)

why enter a game jam if you’re not open to criticism or suggestions for improvement? we’re not saying this to be mean at all, you asked what we thought would be good controls, your response just seems a little mean spirited. thank you for offering a fix, and good luck in the final judging!

I didn’t intend to be mean, and I don’t think anyone else was either. To me the suggested controls seemed worse, surely that warrants some hesitation to implement the change? (And then time ran out, so the release is what it is.)

A fairly standard platformer. The game suffers from some glaring issues though. First, the controls are floaty and the character does not feel very responsive. The bees or the combat also needs work in my opinion. The player should have a few seconds of invulnerability after being hit and while I have no problem with the bees being able to fly through the ground, I do think it is odd the player’s projectiles do not as well and limit the players ability to defend themselves. The game also falls prey to first order optimal strategies which prevented me from really exploring the map after it opened up and really just finding one place I knew I could run around the bees with and water the plants. The weight gain mechanic of making some of the bees passive the larger you got was a cool idea but started to take effect way to late to be of any use to the game as a whole.

I’ve got to say I found this game kind of tedious. I appreciate anyone that attempts to create a platformer, because they’re hard as hell to program well. Getting the motion to feel satisfying with real weight behind it is not something I would suggest beginners to try and capture. I also appreciated that the context of the stage changed with your weight, though a lot more could have been done with this. Ultimately, the main game loop is what broke it for me though. Having to go back to the plant in time was just, again, tedious. If the water on your head changed how you moved or added additional difficulty, then it could have been interesting, but just making the player repeat the action on a time limit felt unsatisfying to me. Also, crouch firing should have been added, otherwise the bees get a lot of cheap hits off on you. I think there’s potential for a great game here, but I would argue the main loop needs to be critically examined.

It was a cute little project. I liked the drop through at the beginning. I kind of expected something with the bit of ground there but I didn’t expect it to open up to a bigger world. For the future I might suggest more enemy variety. Maybe some more ways to fight the bees? Powerups? Also I have to agree that having space as shoot instead of jump really threw me off. I think there is some potential to the project given time and work. Good luck!