What Game Engine/Maker should I use for my game concept?

I have an idea for a game, a concept if you will, where you run a restaurant and gotta collect orders and serve people their food. I just want to know what game engine or maker I should use to make this game into a reality. Any suggestion helps out a lot.

Here’s how the would play out:
-You have 5 tables and customers will come and sit at your table
-they will order a nondescript food, the size of their order represented by the number of

s their speech bubble has
-You can suggest to increase or decrease the order and afterwards accepting the order and getting their food for them from the kitchen area
-You deliver the food, they eat, grow and order some more
-Now you can decide to either increase, decrease or bill them for their order
-Billing them nets you the score you accumulated from the number of stars you’ve gotten from their order
-You can collect multiple orders from the customers, stuffing them full of lots of orders and getting lots of stars

+You can’t give the customers too many orders, cause otherwise they’ll burst/food coma (depending on player preference, unless I can’t code that in, in which case just burst)
+The limit of each customer is randomized and you gotta check their expression to gauge their limit
+Customers bursting/food comaing results in a destroyed table, thus one less area to work with
+The day ends once all tables are destroyed
+When billing people, you have the option to give them a wafer thin mint, like any restaurant would. Whether or not this bursts/food comas them depends on close to the limit they were but giving them a mint does net you an additional star
+A customer who burst/food coma, gives no score

The style of the game is visually a visual novel but not really, interact with options and choices for gameplay and such.

Here is concept art of the section where you collect orders and serve food and watch them grow. You can flip between tables to collect orders. This is the general look I wanna go for. 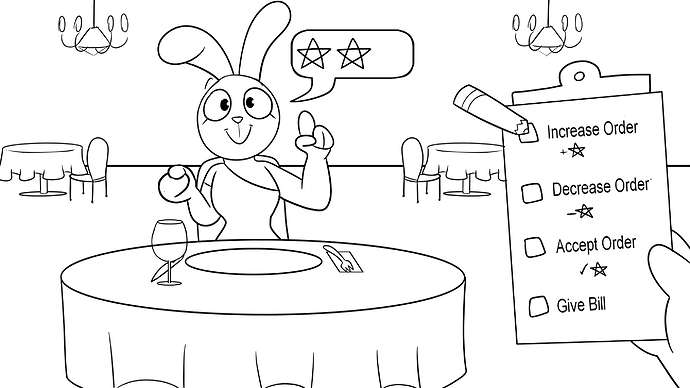 How about GODOT? Or maybe GameMaker Studio?

Hmm, those are good options. I’ll have to check if they’re good for this style of game

Doesn’t sound too complicated; either of the previously mentioned engines would be fine. Of those two I would look at Godot first.

Echoing a bit of what was already stated, considering how UI heavy your concept is godot would likely be the best option. It has one of the best UI frameworks/systems out there for any game engine. It can be a bit confusing though for those who might not be familiar with container based UIs, grids, or flex boxes as it draws a fair amount of inspiration from those.

Renpy can actually be used for a game like this as well but might require use of some of its more advanced features as well as directly using the underlying pygame engine so may not be the best option.

I can not talk on Game Maker or RPG Maker as I have not used them myself but I have seen odder things created with those engines so they could also be options but may require you to be creative.

I would suggest to not use Unity only because its UI system is a pain to work with, but if you are ok with that or have a nice 3rd party UI lib off the asset store you could use that as well.

Thank you for the recommendations and I appreciate listing out the pros of each engine, helped a lot to choose which. I’m definitely gonna go with Godot, seems like the best bet.

I think I saw someone recreat Friday Night Funkin’ with it so it seems pretty much what I’m looking for.