Hello, I’ve been working on a Draconis race patch for Big Fatties and Big Fatties Granular.
So far all idle chestF frames are completed, and I’d like to get some input before I go further in, a preview of all in progress stages is as follows,

Note that these sprites are not final and have missing parts

I would like the community’s input on how I should interpret the pixel dithering on the sides of the waist that represent scales. Here’s some ideas: 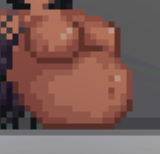 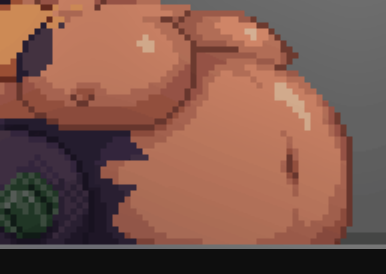 Interpret Dithering as a pattern.

any ideas besides these on what style the side ab scales should take is welcome too!

I would half keep the dithering and slowly make it solid.

Is there a color limit? Can gradients not be used or would they look bad?

Yeah, A hybrid of the two seems like a good idea.

On the topic of gradients I actually added a new skin color gradient value to the sprites! 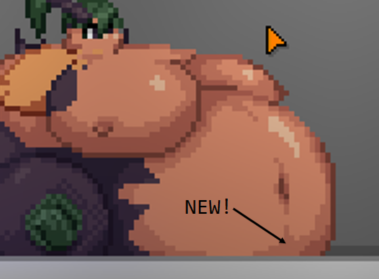 But the way Big Fatties is implemented makes it a little difficult. 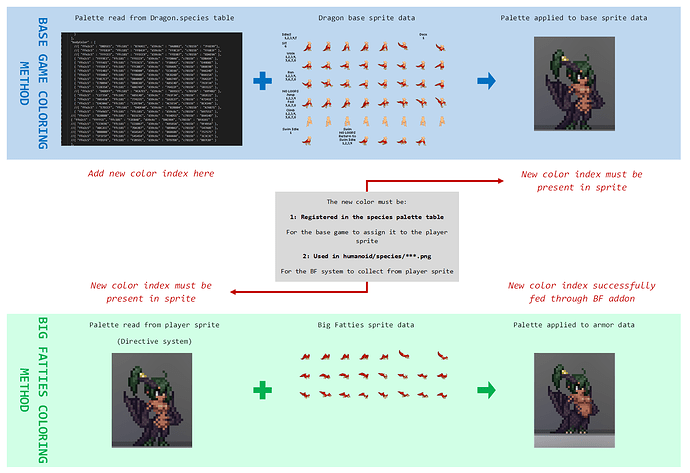 Long story short, to assign colors to the cosmetic fat armor, big fatties reads palette data from the player sprite and NOT from the .species palette tables. This means that if we want to add a new color value to the BF sprite, we’d need to make sure that it shows up in the base sprite that it reads from.
I was able to sneak in a pixel of my new color in a indiscreet place on the base Draconis head sprite, but this opens a whole bunch of can of worms…es:

Correction by Fayane, thank you!
.species table still needs updating, but colors do not have to appear in the sprite itself!

So one color alone is a bit of a pain, adding a full gradient is possible, but with the methods I have it would be too messy for my taste. Of course, someone who knows the ins and outs of how BF is coded might be able to find a better solution.

TLDR, I would love to have a full gradient, but BF implementation makes that difficult.

UPDATED TLDR: It’s not as hard as previously thought! But building that many new color table entries is still a pain

Oke so this is sort of true, but not exactly.

This means that if we want to add a new color value to the BF sprite, we’d need to make sure that it shows up in the base sprite that it reads from.

The mod grabs the portrait of the player (Basically just a bunch of strings with the images, its frame, and its directives) and strips the directives off that. The game doesn’t care about whether a colour it’s trying to replace exists in the sprite or not, it’ll try do it irregardless.

If you add the replace directive in the .species file without changing the sprite, it should still show up (for new characters) on the fat armor anyway.

I see! That makes A lot more sense, thank you!

So I can just use species.patch files to add in the new color table entries to include more full gradients and BF systems should still pick up on it, must have just been using faulty characters.

It would still need to be on new characters though. Once a new character is made, the colors selected upon choosing gets solidified. Patching what exists to be different doesn’t apply to already existing players and npcs. It gets baked into the character. It’s why if you install a mod that expands the colors for races, select them and then remove those mods, characters and npcs with that expanded selection are still fine.

Probably a way to patch the color info into pre-existing characters, but that’s a problem for later

I personally really can’t wait for you to finish. It looks amazing so far!