Alright, here it is. My submission to this years gain jam! I started a bit late, and alot of things aren’t where i’d want them to be, but I hope you can enjoy my silly little game. 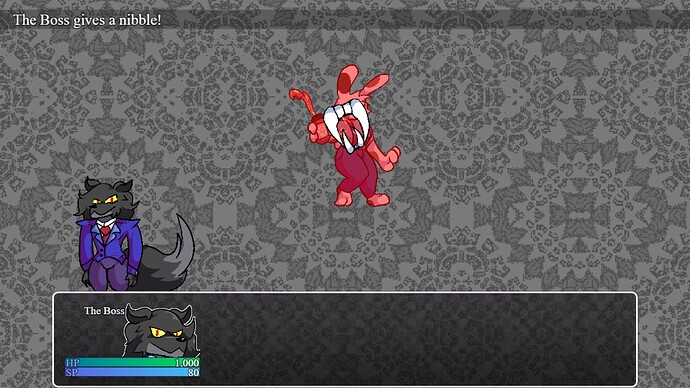 If you have any feedback, i’d love to hear it! no matter how harsh. I’m very glad to finally be giving back to this community

The boss is very cute and he can get quite big too. Very fun to play, still trying to unlock some perks and see the other partners you can get. Got a lucky run where i reach the CEO it seems and lost to him but the text was in congratulations. So i won, i suppose!

Heyy I really enjoyed this game thanks.
Something about the boss and daily sequence that I just really like, and the music slaps too.
Quite a few cool abilities with unique animations. Doesn’t feel very RPG makery and the mouth to mouth ability is super hottt
Fitz is so cute

As for less positive feedback…
well I seem to be having trouble stunning assistants when they become deadly so I stopped using that ability. They can be managed in other ways

I don’t know if mouth to mouthing to full before devouring leads to greater gains?
If the game was to be extended (I hope it does!) buying upgrades can feel a bit grindy at the start so
possibly some flat buffs to get things going a bit quicker?
I don’t know how to spoiler cause idk but I’ll just say I wish I could have done something to the final boss but I couldn’t because well you probably know what i’m talking about

anyway, thanks again for going to the effort of making this!

Great game Puffy! Love to see you continue this! everything was so great~ How ever, boss needs to get bigger in the full game~ maybe even in the transitioning sceens between fights you can see how fat he’s been getting~ along with some more stomach noises and belches~ Fuck that would be so good~

Either way. It’s an amazing game Puffy, you did amazing man.

I will say the boss’s weight stages past 3 are devilishly cute, with the max size being *chef’s kiss*.

Though my only main gripe is about how RNG dependent you are at acquiring “assets”, as you’re better off raiding the breakroom nearly every time except when you can pick up an assistant… until of course you get the ability to start a run with an assistant, in which case you can go whole hog on the breakrooms… especially when your assistant keeps either one-shoting your devour targets or at the very least kill stealing them with a lucky crit.

But having the focus of the game be just “eat the competition, digest them, grofit” just tickles a part of my mind in a good way.

highly underrated game right here! i’m slowly improving and getting better at my runs, and i quite like the rogue-like aspect of it! incredibly cute art, and tons of potential! i’m excited to see more if there’s ever plans for that!

I wish you could change the boss’s looks

really enjoy this game, hope it get updates in future. cool if not

feedback:
upon buying item from shop that only require one, maybe have those remove from shop or grey out despite have fund ready

idea/suggest:
1- new assistance or existed assistance to have ability to leave battle for 1-5 turn (whichever is workable), then return to battle and feed boss a prey, with rare or common if klutz that assistance trip and feed enemy instead
2- new order from boss - get me foods only work if have assistance
3- new enemy which is very willing prey and shout “wait, dont hurt me and i am stuffing up” once or couple of time then “okay i am ready eat me!” which result devour anytime.

“if you modify rpg maker enough - you forget it’s rpg maker”
-me
curious side of me asks if the project will exist outside the gain jam tag (?)

I do plan on it, yes

The music and sound FX and animations add a lot of charm to this game. The difficulty spikes very unpredictably though, made it a bit disorienting at first but to be fair i don’t have a lot of experience with RPGs. I’m not sure how the mouth to mouth effect is meant to work, but using it once doesn’t seem to do anything. Overall though it was fun to grind up my stats and finally be able to hold my own to tougher foes and (attempt to) devour every enemy. The office theming is charming in its absurdity and makes the foes very very charming and funny. Also, even though i kept dying to the final boss, for some reason the text scene afterwards implies that you beat him anyways?

Easily one of my favorites from the jam, and really happy to hear that work on this is planned to be continued, good work!

may i help with sound in-game?

this was nice. it’s not every day you see an rpg maker game with combat that has something to it

I thought that the bosses base attack healing the player was nice but the more I played the more I thought it detracted from his toolkit. because it heals (and it scales with leveling HP) you can stall out a combat encounter pretty easily. so a very safe and effective way to use him to just use the base attack (making the “relevant depth” of the combat lower for him).

the other party members feel like they are in a pretty good spot but I have played with them less so I’m not as sure about that.

crits really suck in this because you want to hurt the enemies down to edible hp and if you get a crit that enemy just dies instead. this might be my radical anti-rng stance talking but I don’t see why this game has any rng at all when it comes to attacks. it has enough going on to make battles feel interesting without it (especially with other party members).

another thing that I might be in an minority about: I think not having leveling stats would be more interesting (though this might just be because the game is short and enemies don’t seem to get much stronger). right now I feel like the game gets easier as you play it more and understand the combat system more

I would like to see where this can go. having more enemies that have bigger differences than “x but stronger” and having a full party for a bigger chunk of the game would be nice

I really enjoyed this one! The music, animations, n sound effects added a lotta charm to it - the difficulty spike is a little unwieldy, but with the “failing forward” of the shop upgrades, I feel like it balances out. The only thing I’ve found a little unpleasant was the critting system; devouring enemies is what helps you scale the real “heavy hitting” attacks, and critting can often punish you by one-shotting an enemy instead of getting them to a devour%.

The other thing that was admittedly resolved with some experimenting, but having a turn order apparent and displayed would be huge, for this game!

Overall I really dig what you’ve got here, n I’d love to see where you take this if you decide to make this into a bigger project!

Let’s play is up now

It’s a great game, but I have a single suggestion:
Please make a gender change option at the start of the game! I wanna see a girl Boss so bad!