Have discovered yet another promising little WG game on Twitter 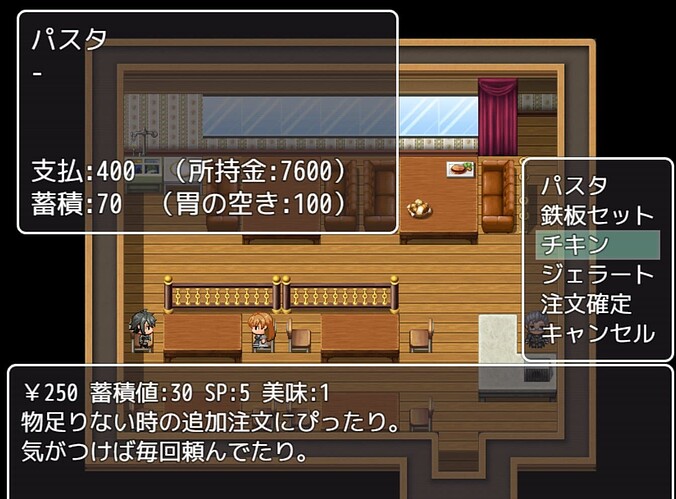 You go through various meals increasing the size of your protag and their room-mate.
It really hasn’t played nicely with Translator++ (which I’m admittedly an amateur at) so if anyone’s interested on that front, feel free.

I try to download the file but the folder it’s empty. Any tips?

Wierd it worked for me try to download it again.

There are a lot of Japanese(and non native English) developer games on the site. Welcome by the way

This does look really interesting, though I’ll admit, using google translate on my phone while playing it is rather clunky, lol.

Translated it with Translator++, it worked fine for me. Here it is:

If anyone wants an uncompressed file just tell me.

Now to actually play the thing.

After a bit of playing its clear that none of the item descriptions were translated even though everything should be done according to the program. How annoying.

The game uses one or more plugins that don’t play nicely with Translator++. So while it will translate and run, progression is broken and you’ll be unable to raise your weight above 60kg.

It’s most likely the skill tree being disrupted that’s causing the halt in progress. You’re locked to 80 fullness until you unlock 100 in tree. I believe the food to skill converter is also bugged. The skill tree has a thing that hard caps you at certain weights that unlock after cutscenes.

First scale also only goes up to 59.5kg for some reason by game design.

How would someone go about translating something like that then? Would you have to go into RPGM MV and do everything by hand?

If so then I’m out of luck, I have MZ installed. In any case that task should be left to someone who actually understands Japanese.

I might translate this once it’s finished/if there’s no coming updates and people are still interested. I haven’t played it all yet since I prefer games that are more like actual RPGs, but it isn’t out of the question for me. That said, if someone else who prefers this type proposes to translate it, they shouldn’t hold back due to the possibility of my tentative translation.

Hand-translating a game also naturally results in getting a good look at its inner workings and how it functions, so if I do I should be able to answer any mechanical questions at that point.

Veruka’s put a questionnaire out (in Japanese, but the questions translate easily enough) for what direction people want WG games to go in, should anyone want to have a look:

For sure a 10 for image in the game

I’m currently translating it, but can’t give any ETA. I do like this kind of game.

I’m currently translating it, but can’t give any ETA. I do like this kind of game.

Meanwhile, I had a fair bit of success with Textractor (x32): 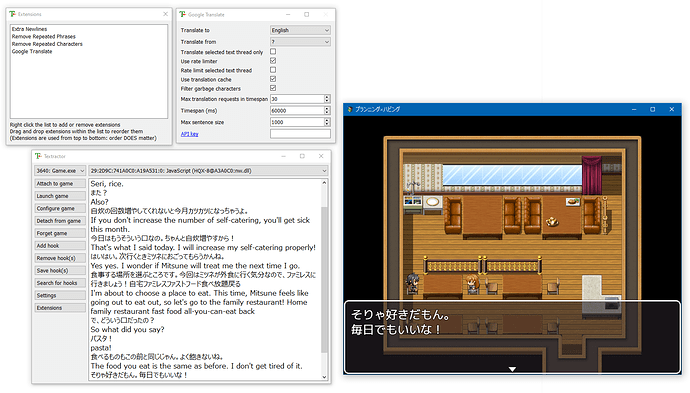 If translating fails, I am actually in the process of learning Japanese, so fingers crossed I’ll be able to play it one day! XD