I was thinking some kind game about my zefussian worldbuilding project, where you play as visitor disguised as hijacked service robot blending in with some village of randomized zefusians in their home planet, where they can gain weight into massive size, build places for larger ones, some wrestling and some fatty sports, farm new kinds of foods, etc.

It would be interesting if this game will be in 3D and some character customization.

Not to be rude, but I don’t think anyone here knows what a Zefusian is or what significance that has.

Here’s some reference of zefusians, I created this species over ten years ago
Artwork Gallery for LeonardGreenland -- Fur Affinity [dot] net

I like the idea but I will say it’s a ambitious project. Simulation/management games like this are infamous for how hard they are to get working. This is mostly because you need every part up and running. Unlike platformers where getting good movement already makes a fun game.
If you want some help I have attempted such stuff before. Non of my prior projects went very far though.

I mostly exited to fiddling around with sliders on character customization screen, so I made base model of zefussian in couple, three days, I’m still stuck on detailing its face, limbs and wireframes. 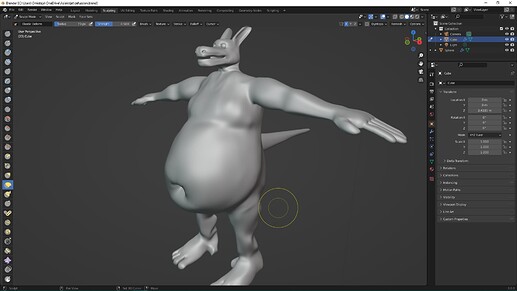 …Or maybe this game starts in some closed place like space station or research center, where player start as wheeled robot while they upgrades this robot into android, gaining some several parts and capacity for robot body.
I was thinking about some games like Super Fatty RPG, Kobold Village and Fat Bear Week

Speaking of platforming, I always thinking about climbing on blimped zefusians like some kind ramp to higher places or rolling down the hill like marble race

I was thinking about top down view but I mostly want hang out with them on first person view.

About foods, I was thinking about farming and harvesting some stuff for cooking new kinds of foods, I recently played Dragon Quest Builders 2 where they rebuild the farmland on first town

I’m not sure will this be dating simulator with hints of survival horror, where player play as tiny service robot blending in alien planet to become fully sized one for hang out alien society