About the Team Poppu’s Food Out! category

banner24500×1500 1.58 MB
Team Poppu is a group of creators, lead by 8FineCookies and LordBater. Joined by other amazing creators such as Post-Bop & Lui!

In our first gaming title, you will be commanding a battalion in a Tower Defence style game against the sentient Sugar Demon hordes. We aim to implement simple but fun mechanics combined with a belly stuffing aesthetic, something that’s both fun to play and watch. Place your units and use your commander’s signature abilities to make sure your soldiers don’t get “too” full.

WAWWO3450×329 53.2 KB
We are always working hard on the game! We have most of the mechanics done and in the process of making the game art. We’re also working on the story, which we’re releasing as we go!
Update 1:

[banner2] Hello everyone! In this update, we will be covering Food Out! and officially opening our Patreon and Discord! [image] Introducing Commander Monaha! This short will tell a bit about her story! [[FOOD OUT!] Monaha's Origin Story] After a devastating surprise attack against the Anti-Food Force headquarters, it was quickly determined their very own Commander Knack taken deep into enemy territory. Left with a deficit in power, the young upstart Commander Monaha is placed …

We’re really excited to make this content, and hope you’ll be excited to join us for the ride as we make our first belly growth game!

Overtaken by an invasive species of sentient food soldiers, a specialized taskforce banded together with a sole objective to keep the Food Out! Able-bodied soldiers with the stomach for food violence we trained to stand watch at the gates, with orders to consume on sight. Starting small with just small units, the resistance would recruit an even wider range of talents, from the explosive Bunzooka panzerfaust, to the muscle simply referred to as “Big Betty”, all guided under the select few Commanders blessed with a supernatural sense of leadership. United, they are the AFF Anti-Food Fighters against the foreign Sugar Demons. All led by the nefarious Butelle Icetop, a lady of high command who follows her master religiously, commanding her sugary army to cause chaos throughout the lands! Her sugar mites infect the world, candyfying everything they touch! Yet Butelle is only one of the enemy commanders, and Knacks arch-enemy. Who will rain victorious from this conflict?

So the story is currently being released through images, however, a short story coming soon with the new animated short we’re working on! If you want to take a look at what’s going on in the world of Food Out! currently, I’ll link the order of events below!

The structural pillars of their squads, Commanders influence the tide of battle based on their unique toolsets. So despite all the like-minded soldiers that make up a squad, no two battalions are alike under a different Commander’s leadership. 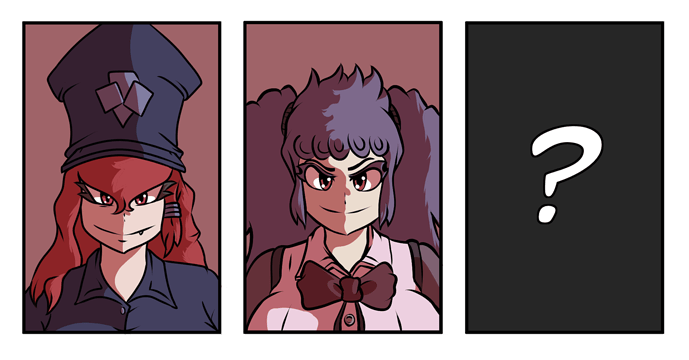 1237×646 242 KB
This will be updated as the commanders are fully shown! Also, these are the main 3, expect a community commander (Winner of a competition), and a secret commander!

Trained to stand their ground against the approaching Sugar Demons, these military units are both the first and last line of defence, depending on their position. A successful commander must get to know each of her units, which are best suited for offence, for defence, and above all know the proper squad formation for their team’s strategy.

Here are 3 examples of Units, stats may change during testing and balancing

Its been a full month without a single comment :0 ? Hopefully that doesn’t deter the team in any way id love to see this game through ^^ Good luck Team Poppu!

We will be posting more very soon! Will be making an Update post on our pages and here! : )

Its been a while since there’s been any posts, are you still working on the game?

I noticed Team Poppu has been working on different games, which is fine and all. But, I am beginning to wonder if you are still working on Food Out or, just decided to work on something else???

Hello, yes Food Out is being worked on still, I definitely made it public way before it should have been aha, but that’s the excitement of development and being new to the community at the time aha. I’ve had to balance education with earning funds to help with other materials for the project, so you’ve probably seen me with a lot of DrBlackJacks projects lately. But I can assure you Food Out! will be released and be the best I can make it! Sorry about the late reply too, I’m very bad at social media.

so game is still in work?

so when should we expect the game