It is with Great Enthusiasm and Excitement that I’d like to announce something that’s been worked on by several hardworking people for some time, a great collaborative effort in the form of a West Marches D&D game using the weight gain and fat mechanics of Expand&d.

Some of you may have heard of, or even played in Windrest in the past. This was the previous attempt at that grand project. It was such a wonderful chance to really create some great stories, forge real friendships, and create something wonderful that we had to do it again. This time it comes after nearly a year of prep work.

So without further adieu, I present to you… 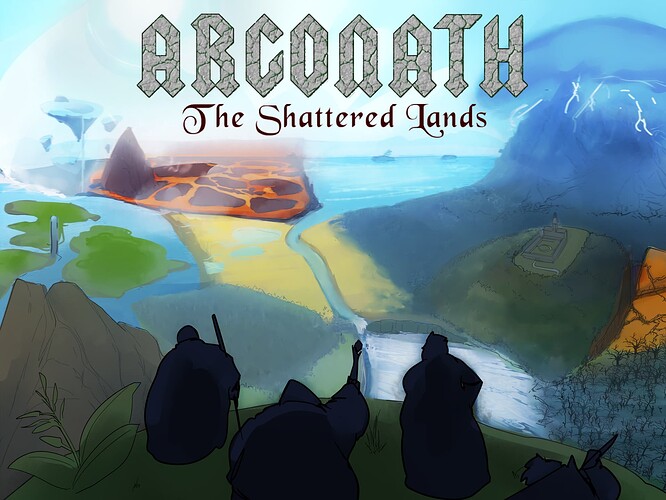 ARGONATH, THE SHATTERED LANDS
When the world is crumbling around you, death and destruction swallowing up everything we know, it’s time to go elsewhere. We need to go to a new place, a different plane, a new home. We need to go to Argonath, a realm made up of everywhere else, a patchwork of many worlds. This can be a new home for those with the will to build it. There will be struggle, but hold on to the dream, explorers… and forge your path through these shattered lands.

Are you ready to forge your destiny in a new world, dreamer?

The Place: Retrofeed Server
The Retrofeed Discord server has been a wonderful home to many ED&D and other rpg games. It played host to Windrest two years prior, and now it will be home to Argonath as well. Even if you don’t join the game, it’s a great place to hang out and explore rpgs together.

Extra Content: Widening Wares of Windrest
Here is a link to the book that contains a lot of extra content beyond the regular ED&D books that will be available in Argonath. It contains the collected works of all the hard working DMs who worked on the Windrest West Marches before it.

While most of the details can be found on the Retrofeed Server linked above, I’d like to give an excerpt from the start of how Player Document that outlines some more details of what Argonath is, enjoy!

What is a West Marches

A West Marches style campaign is a very specific style of game that involves several DMs and many players all playing the same world. Instead of a regular long running game with the same regular play day, games are put together by different groups of players on different days as they decide to play. The story is less structured, and often built in such a way that the main content is exploring some form of wilderness outside of a hub town that all the players call home. This is how it works in this game, with the D&D sessions involving going out into the wilderness around the safe area, while being able to RP freely in town in between these sessions.

What are the shattered lands

Argonath is in a different dimension than the regular material plane. This place seems to be an endless landscape made up not of normal terrain, but of chunks and sections of other places, stitched together into a patchwork world made up of everywhere else. One might find a volcanic field next to an archipelago of floating islands, or a verdant forest pressed up against a toxic swamp. It’s a world of strange possibility, where one can easily find displaced ruins, and people who’ve been pulled along with these pieces of land to make new homes for themselves.

You are coming here from your original homeworld, Seantala, because the world there is ending. Many different catastrophes plague the world, and it’s no longer viable to stay there. So the remaining people of the world are sending an expedition through the portal they created as a last ditch effort. It has led here, to Argonath. Here, the members of the Expedition must explore this new world, and build a new home for everyone else who will eventually come through the portal as well until this becomes their new home.

Built around the stabilized portal, this fortified camp serves as the base of operations for the Expeditionary forces and home to the player characters. It’s here that you rest between missions, carousing with your comrades, and spend your time improving your skills. It’s also the settlement that, over time, will grow into a grand new home for all the displaced peoples of Seantala. It’s not much to look at starting out, but over time the small tent city will include new homes, shops, and even grand magical buildings all created through your combined efforts.

Role of the players

As a Player in Argonath, your role is that of a member of the Expeditionary Vanguard. A refugee like everyone else from whatever homeland you hail from in Seantala, you’ve signed up to help the Expedition in their efforts to explore the Shattered Lands and help build up the new settlement. It’s up to you to make this place the home you want it to be.

Throughout all games in Argonath, there is room for all kinds of themes and tones within missions, with everything from light comedic moments, to deep emotional, or even dark moments. The overall tone will always be something in the middle. Take your character and the world seriously, and everyone and everything around you will as well. Death is possible, but not likely unless you see the hardest challenges you can.

Is this still open? The discord link currently doesn’t work; at least for me it doesn’t.

As Mango said, it is still not at the date yet, but I’ll get that link fixed right now!